The KDE community has launched a second attempt at a "unified login system" for all KDE websites called MyKDE. The new system will replace the old "KDE Identity" "central account manager" because it was "severely outdated and hindering the upgrade of several other systems". KDE community members can use the new MyKDE identity system to login to KDE Wiki's and it will soon work on most of KDE's websites. 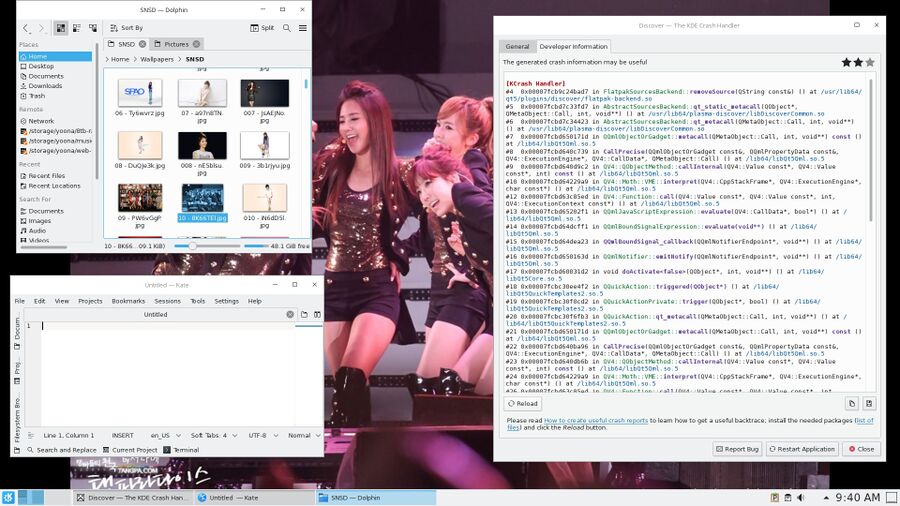 The KDE community has a lot of different websites they maintain. The newly launched Plasma Widget Tutorial at develop.kde.org/docs/plasma/widget/ is only one of many sub-pages at develop.kde.org. The KDE documentation team is very secretly working on adding a Kirigami Tutorial similar to the Plasma Widget Tutorial for those who want to build "build beautiful, convergent apps that run on phones, TVs and everything in between" to that site. That tutorial is just one of many new tutorials aimed at attracting developers and users alike.

KDE's main website is kde.org. Then there's TechBase Wiki, a whole site dedicated to putting Plasma in your pocket, Miscellaneous stuff, the KDE Community Wiki and it doesn't end there. The KDE e.V. is a registered non-profit organization that represents the KDE Community in legal and financial matters. There is, of course, a complete website just for it at ev.kde.org where you can read their annual community report for 2019 where they reveal their total plan to:

"take the apps to the users, who should be able to get the latest and greatest versions on whatever device they have"

ev.kde.org Community report: It's All about the Apps

Most people are not using Linux, Linux market share is around 1% of the overall desktop market. And that's a shrinking market, only one third of all web traffic comes from a desktop or a laptop computer. A 1% desktop market share is a smaller share of the overall market now than it was 10 years ago. The KDE community is very aware of this. That's why they have cool technologies like KDE Connect which lets users control their desktop from a mobile and vice versa. Grabbing a slice of what little is left of the PC desktop segment is hard to do without Windows-support which is why the KDE team:

"want to be proud to have our stuff available through Microsoft's store."

ev.kde.org Community report: It's All about the Apps

That's not enough. The KDE e.v. is also promoting their "apps" in the Chocolatey Windows store controlled by the for-profit corporation Chocolatey Software, Inc. A broader presence is better than a smaller presence. The same is true on Android, so KDE is getting their "apps" into the both the Google Play store and the free software only F-Droid app-store. KDE does have a big presence on Linux, but that's not enough. KDE is offering their applications as Flatpaks on Flathub, Snap at the Snapcraft store and AppImages on Appimagehub.

Maintaining so many different packages requires some co-ordination so KDE has a Phabricator phabricator.kde.org and a GitLab instance at invent.kde.org. GitLab supports issue tracking, but KDE doesn't use it for that purpose. Bugs are, instead, filed on bugs.kde.org. There appears to be quite a lot of people reporting that a lot of KDE software is krashing at that site.

The number of KDE-related websites is adding up. Keeping track of separate user-accounts for all of them can quickly become a full-time job. That's where identity.kde.org, the KDE identity "central account manager", came in. Years ago. It would, at the time, offer

That never happened. Someone had a great idea: Let's create a universal identity system for all KDE websites! They created the identity.kde.org website and kind of forgot about making it possible to actually use that identity to login to the rest of KDE's websites.

Years passed by and then someone in the KDE community got the exact same idea: Let's create a universal identity system for all KDE websites! So they did. my.kde.org is a new "unified login system that will give you in the future access to a large number of services around KDE.". The new identity system, code-named "MyKDE", can already be used to login to all the KDE wiki websites. Support for more websites is coming.

The reasons why the old system used by identity.kde.org had to be abandoned in favor of the new system are mostly technical. The old system used a OpenLDAP datastore and a custom front-end application written using PHP. Using OpenLDAP imposed "horrible limitations" and account removal required "significant manual intervention and effort (several hours work in some instances)". There's further details at phabricator.kde.org/T8449.

KDE developers and KDE e.V. members will have their existing accounts migrated to my.kde.org as disabled accounts. Those can be activated by asking "sysadmins" to enable them. Everyone else who used identity.kde.org will have their accounts removed unless they login and have their accounts migrated before it's too late. When they will mass-purge accounts that haven't migrated over is unclear. Perhaps it's time to go visit identity.kde.org if you have a KDE identity account and you'd like to keep it.

We do wish the KDE community good luck with their new MyKDE identity solution and we hope it amounts to something this time around. There's always the possibility that third time's a charm if it doesn't..