As your image collection inevitably grows huge, you will need a good program to view, browse and enjoy your pictures. There are a lot of the image viewers available for Linux today. Some are great and some are just crappy. Here are some brief descriptions of the alternatives so you can pick what sounds best for your needs and preferences.

Image viewers with a graphical interface

These are programs with menus and things like that. See below for simpler GUI-less programs which are meant to be ran from the command-line with a picture or folder as argument (feh myimage.jpg).

Geeqie, formerly known as GQview, is a personal favorite and it has been since it went under the name "GQview". The new name came when someone picked up the then-abandoned GQview code and re-booted development in 2010. 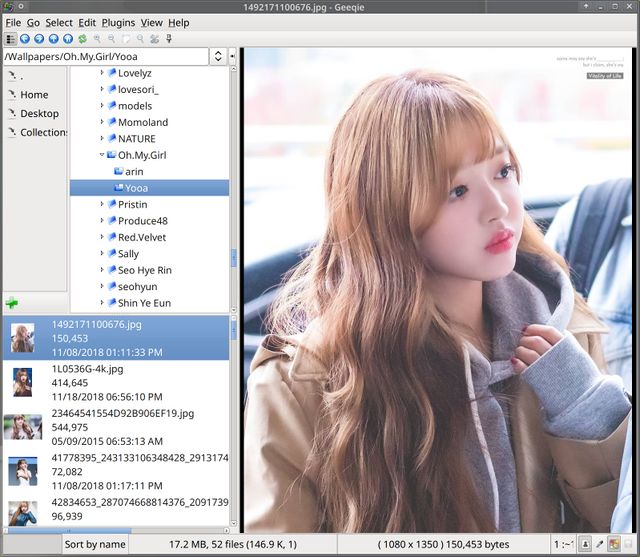 Geeqie is great for browsing the images in a folder or folder tree. You can easily decide if images are to be shown 1:1, zoomed or scaled. Geeqie has some basic editing features; you can flip, rotate and zoom images and it will also allow you to open images in external programs which it refers to as "Plugins" for some reason (No, GIMP is not a "plugin" for Geeqie).

Geeqie has a "find duplicate image" feature which will also help you find similar images. It's also got a really advanced and powerful image search feature.

It's the best pure image viewer there is. There's nothing as efficient and easy to use if you want to quickly navigate through folders and browse images in them.

Gwenview is nice image viewer and organizer built on the KDE libraries. It in all desktop environments. It lets you browse the images in a single folder with the arrow keys and go up to the parent folder and pick a new folder with alt+arrow-up. It will play videos if a folder full of images happens to have a Webm or two. 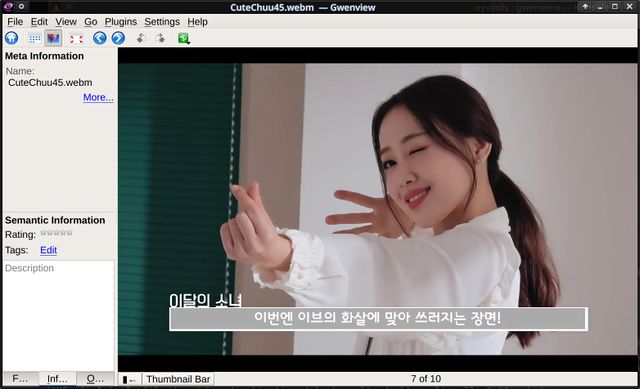 Gwenview has very basic editing functions, you can do simple things like rotate and resize images. And you can drag images between two Gwenview windows and organize your files.

Gwenview is alright but not great as a image viewer. It supposedly has a slideshow function in the menu but all that does it open the folder view full-screen. There is no right-clicking a folder and choosing Slideshow or Slideshow recursive like there is in geeqie. 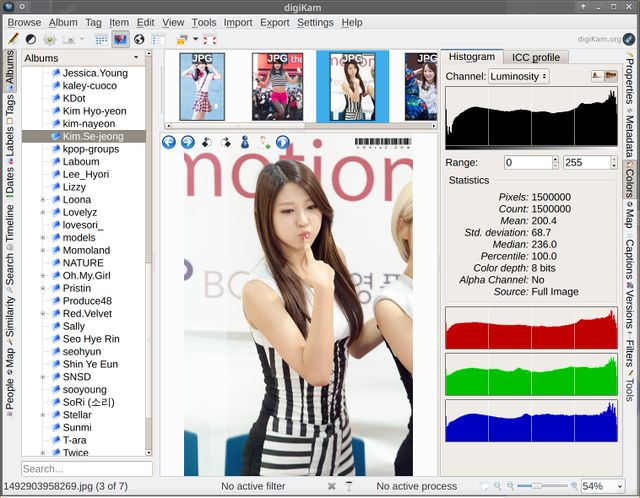 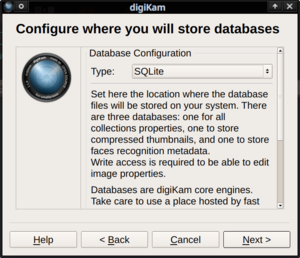 You have to go through 20 question just to use digiKam

digiKam is a full-featured photo management application made using the KDE libraries. It works fine on any desktop environment as long as you have those.

digiKam is not a great choice if you are looking for a image viewer program. If you want a rather advanced photo manager where you can organize your photos in albums and sort them chronologically, by directory layout or by other metrics then digiKam is a great program. It is also excellent for transferring photos back and forth between a desktop computer and a digital camera or a phone.

The simple fact that it focuses on photo organizing and management means that is where you find all the features. As a image viewer it's just not very efficient. For example, scrolling the mouse-wheel above the currently viewed image doesn't take you to the next. You can move to the next image with the arrow keys and PgUp and PgDown - But alt+up-arrow won't take you to the parent folder. You get the idea: DigiKam is great for what it is and it's not made for quickly browsing through the images in a folder for folder tree.

GNOME Image Viewer, named "Eye of Gnome" (eog) before GNOME started calling software "apps" and renamed everything by it's function, is a very basic and really limited image viewer designed for GNOME and only GNOME. It looks silly and out of place in every other desktop environment (you can ld-preload a library and get the window titlebar as shown in our screenshot). 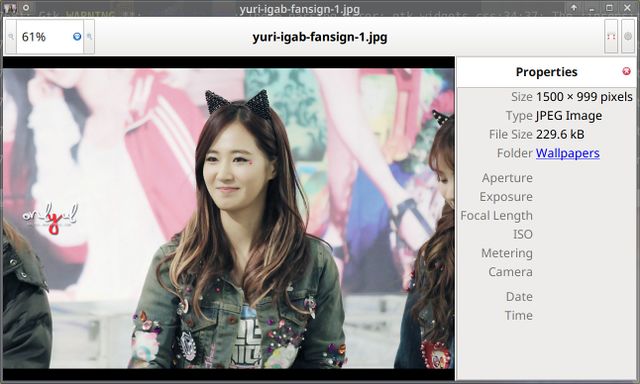 You can't press f to get a full-screen view. You can, however, double-click and get full-screen.

You can change the scaling of the image you are viewing or choose "best fit". This will only apply to the current image, the next one will be viewed at 100% of it's size regardless. There is, since it is a GNOME program after all, no way to set a default.

EXIF image data is displayed in a frame to the right. This frame can't show anything else.

GNOME Image Viewer can be used to view the images of one folder. It's trash as a general-purpose image viewer and browser.

gpicview is a simple image viewer with a toolbar on the bottom. You can browse images in a folder with the arrow keys and the mouse-wheel. You can choose to fit larger images to the window's size by pressing f and g shows images as their original size. This setting is remembered for all images you view. Smaller images are not up-scaled. 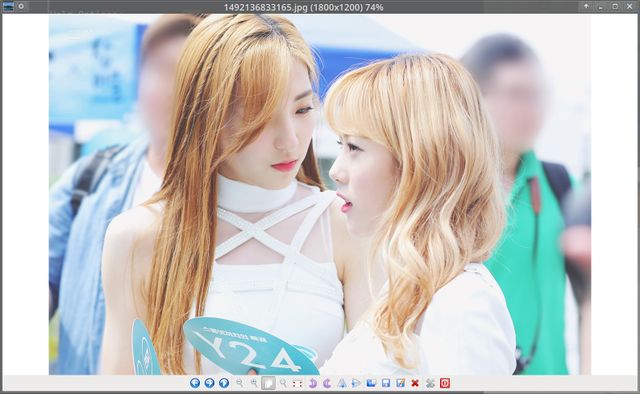 There is no going up to the parent folder or browsing folders or a folder tree. You can open an image in a folder and then move to other images in that folder, that's it's way of letting you choose another folder to browse.

gpicview does allow very basic changes to images to be made, you can rotate and flip images. And that's it in terms of editing functionality.

gpicview is fine for browsing the images of just one folder. It's too burdensome to use as a general-purpose image viewer and browser, switching between folders is simply too much work. geeqie is simply much better 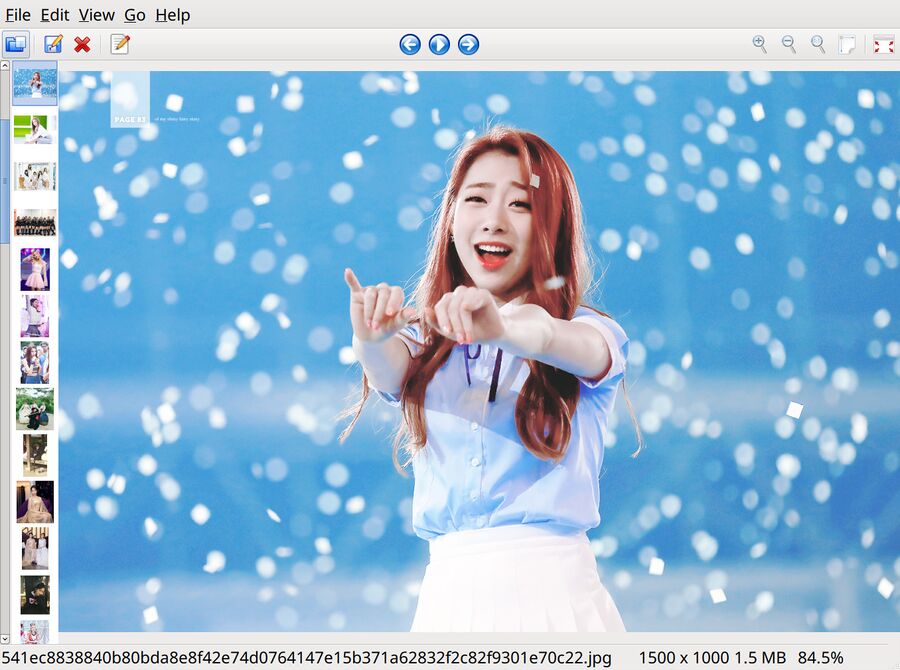 Ristretto is a image viewer based on GTK 2 made with Xfce in mind. It has the same basic flaw gpicview has: Switching between folders requires you to press a button which opens the GTK file picker. You then have to choose an image in the folder you would like to browse in order to switch to that folder. It is fine if you have all your images in one folder. It is simply not a good choice if you organize your images in folder trees and you want to quickly switch between sub-folders while browsing your collection.

Ristretto also fails to remember image zoom settings from one image to the next.

xzgv is a really small (156k) yet somewhat feature-rich image viewer. It lets you browse images in a folder and view next image with space and previous with b for back. 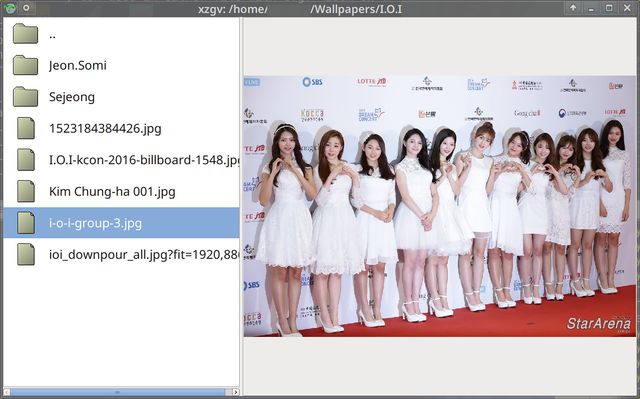 There is a handy folder-tree on the left side which must be used to switch folders; there is no keyboard navigation. Images can be fitted to the window size by pressing z and the view size preference is remembered and used for further images.

xzgv has a rather interesting problem when used on dual or triple monitor setups: It will always open on the far-right display with a window size of the entire desktop. This means that you have to drag it to the left and resize it time and time again to get it properly sized and you have to do this every time you start it. That rules it out as a usable piece of software; in the trash it goes. Unless, of course, you only have one monitor. In that case it's somewhat annoying that it will open full-screen and not the last used window-size but that may not be a deal-breaker.

The "mouse" is a very popular invention and many people, including myself, like to use this device to do things on a computer. However, some people prefer the $ command prompt and view this whole GUI thing highly over-rated.

feh has a large number of operational modes. The default mode is an image slideshow, showing one image at a time from those specified on the command line. You can simply start it with feh *.png and press pgup/pgdown to switch between images.

Keys and mouse control may be used to move through them. It is great for recursive slide shows: The command "feh -zZFr -D 2 pictures/" will display randomly (z), in fullscreen (F), recursive (r) and zoomed to screen size (Z) the pictures in the folder pictures/ with a delay of 2 sec. It does lack some basic features like sorting by full pathname in recursive mode. However, if you want to display an image without borders on your Gnome desktop, feh will do it easily, and the man page will even list the option (-x).

feh does have a menu with some very limited features. You get it by right-clicking the image you're enjoying.

The feh manual is quite long. It is, after all, a really feature-rick image viewer even though it doesn't have a GUI.

It's handy for viewing some image real which by running xv myimage.png but it has limitations: You load your one image and that's it. There is no easy browsing of more images in the same folder or anything like that. You want feh for anything more than simply loading one image. [ This isn't true. xv will load all of the images given on the command line, and you can move between them with space and backspace. ]

MComix, a fork of Comix (which hasn't been developed since 2009), is a image viewer specially designed to view comic book archive files. These are compressed files typically named .cbr, .cbz or .cbt with a large collection of images. You can extract a comic book archive and view it with any image viewer but it's simpler to use a special-purpose program. MComix is made for that purpose and good at it. It's worth mentioning that KDE's PDF reader okular can also open those comic book archives.

Bankrupt and Finished: A museum of Discontinued Image Viewer Software

There is no coming back. Ever.

F-Spot was a piece of GNOME software which ceased development in 2010.

KSquirrel was an image viewer for KDE 3.x. It was a really nice piece of software. It was last updated in 2007. The only reason we even mention it's former existence is that we loved it and praised it when this page was created early 2006.

We had this to say about KSquirrel: KSquirrel is an image viewer for KDE with a disk navigator, file tree, thumbnails, extended thumbnails, dynamic format support, DCOP interface and tools to resize, rotate, convert, colorize and print images. 41 image formats are supported.

Kuickshow was another KDE image viewer we absolutely loved. It has not been updated since 2001.

KView, like KSquirrel, is another image viewer which was popular on KDE 3.5. It was never ported to KDE 4. The last version was released in 2009

Pornview was an image viewer somewhat like geeqie. It was originally released in 2002 and it got semi-regular updates until 2015. It's no longer part of major distributions repositories. You can technically still get it the source and compile it but it's not worth it: It was fine for viewing slideshows and that was it. It had a lot of bugs it's entire life-span.