Kdenlive 20.08.2 Is Released With 17 Bug-Fixes And GPU Accelerated Video Rendering

The free multi-platform video editor Kdenlive got automatic scene splitting and hardware accelerated video rendering on the GPU in this release even though it it was released as just a minor version bump. There's also 17 bugs that have been fixed since 20.08.1 was released. GPU video rendering is twice as slow as CPU rendering, so it is, for now, a utterly useless new feature. 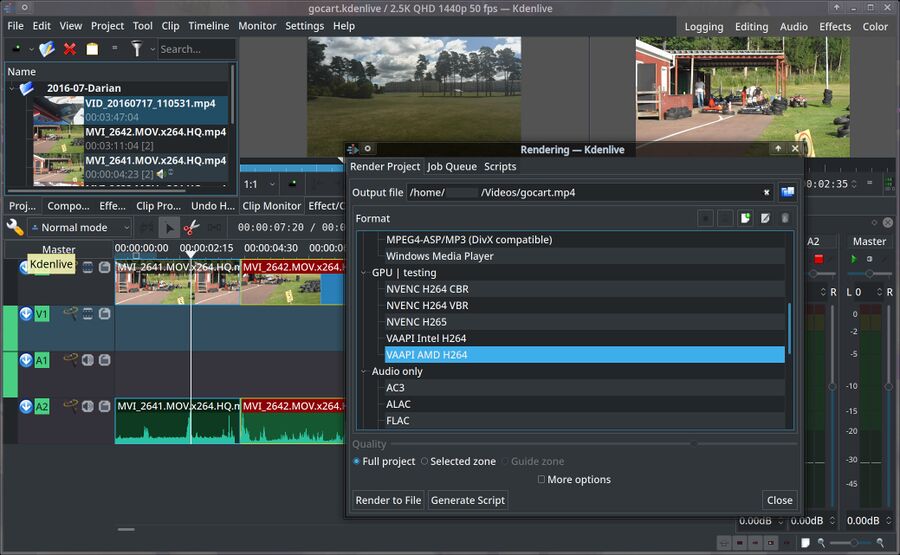 Kdenlive can do video rendering using the GPU.

The Kdenlive free software video editor is far from an alternative to commercial video editing software for professionals but it's more than good enough for hobbyists looking to make that first YouTube video. It's fine for editing home videos and things like that.

The latest version gained support for hardware accelerated video rendering for video export, proxy creation and timeline previews. That is, in theory, a pretty big improvement. In reality it's not.

GPU accelerated video rendering is, for now, just for GNU/Linux users, the Windows version remains limited to CPU rendering. Similar GPU rendering support will be added to the Windows-version in the near future. Video export, or rendering, can be done using VAAPI on AMD graphics and Intel graphics hardware and NVENC on Nvidia hardware if the proprietary Nvidia-driver is used.

The video rendering selection box lists the new hardware accelerated GPU video encoding profiles under "GPU testing". This new feature works to some degree but it's completely useless. A simple test rendering the video clip in the screenshot above reveals that there's some.. issues.

Copying that to a new profile with vb=10000k to get a equal file-size did not reduce the rendering time. A close-up inspection of the process tree reveals a single-threaded usr/bin/melt -progress /tmp/kdenlive-onGkSZ.mlt process during GPU rendering. Perhaps it needs to be single-threaded in order to render to the GPU. Perhaps not. We do not know, we are not kdenlive scientist. What we can say for sure is that the hardware accelerated GPU rendering is, for now, limited to that one single-core melt thread. The result is that the new VAAPI rendering in Kdenlive 20.08.2 removes "accelerated" from the term "hardware accelerated video encoding".

The kdenlive team did a lot of hard work to bring hardware not-actually accelerated video encoding to kdenlive. It is great that they are working on it and improving it in key areas. The sad truth is that the end result of the hardware video encoding efforts is a dismal failure.

There's also a pretty useful new feature called Automatic Scene Split in Kdenlive 20.08.2. Using this on a video clip makes Kdenlive figure out where in the clip there's a new scene. It can use that to either split the video clip into sub-clips or add markers. Using it is as easy as right-clicking on any clip in the project bin and selecting the "Clip jobs" menu item. 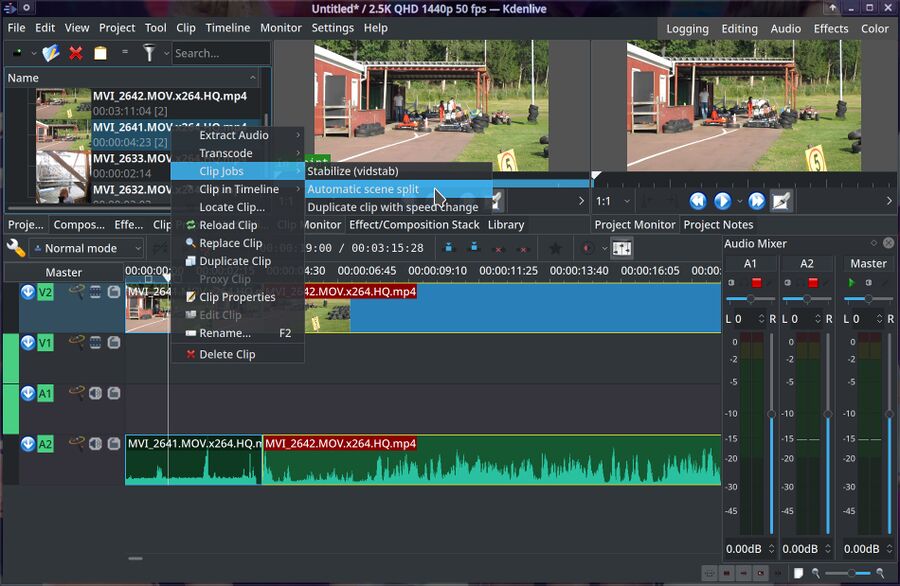 Kdelive has a new "Automatic scene split" function that lets you split clips based on scene transitions within the clip.

The Automatic Scene Split feature does a pretty good job at figuring out where the transitions are. It works as it should.

Kdenlive for Windows, macOS and Windows can be acquired from kdenlive.org/en/download/. The Linux versions available there are in the forms of an AppImage and a Ubnutu PPA.

That one really weak old AMD Beema A8-6410 chip you've got there. That's a use-case I forgot to kinder, thank you for bringing that up. There's probably a tipping point where the very poorly implemented kdenlive VAAPI hardware encoding becomes beneficial. Though it is odd..

On my system the hardware encoding results in one melt thread running on a single CPU thread and that thread sets the limit for how fast the hardware encoding is done - and the result is 2x the encoding time CPU encoding gives. What's odd is that you'd think that same single-thread limitation would apply to CPU encoding as well but that's apparently not the case.
Permalink
You are ignoring the author of this comment
Show comment | Manage ignore list

Is there something I need to install to use the "testing" GPU rendering? I'm on Arch, I have an RX 5500XT, but when I select "VAAPI AMD H264", I get the following error:

I'm using the open source AMD drivers (that come with the kernel), if that makes any difference.