KPatience (executable kpat) is a all-in-one solitaire card games package made using the KDE libraries. It offers 12 different patience-requiring solitaire games. It supports card deck themes and game themes and it has card animations if/when you win. KPatience comes with a very in-depth handbook which explains how to play the included solitaire games in case you never heard of them before. 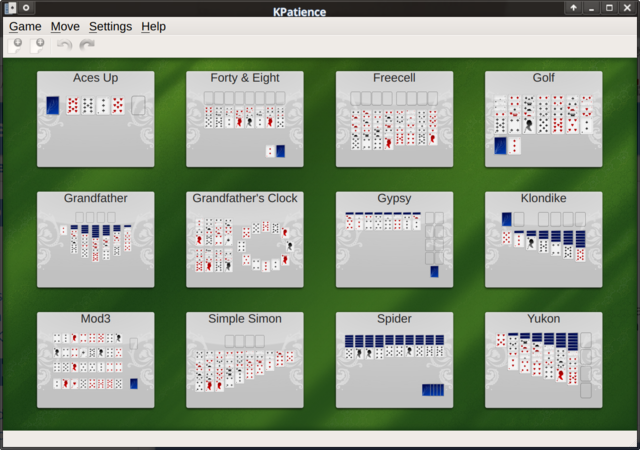 The modern version of KPatience (as of version 3.6) allows you to choose between the following solitaire games: 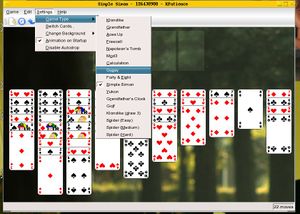 Kpatience v2.2.2 had two games the modern version does not have: Napoleon's Tomb and Calculation

Earlier versions of Kpatience had two addition games: Napoleon's Tomb and Calculation. These games were, sadly, lost sometime during the porting of kpatience and the "KDE games" package from KDE 3.5 to KDE 4. The modern Kpatience version is made for KDE Plasma 5.

Second, the KPat version of the Spider game is a "Relaxed" version, that is, it allows for dealing a new row when there is an empty space in the tableau (a blank column). This makes the game easier to play. In the last 1000 deals of 2-suit Spider I have won all of them or the Solver declared it "winnable."

Third, there is a Solver that will find a solution to the easier deals. It will play out these "winnable" deals at a slow enough pace so it can be observed. At any point it can be stopped and backed up so the method of solution is obvious. On the harder deals one can proceed one move at a time and wait for the Solver to analyze the situation. At some point it may declare the game "winnable". Then it can complete the game and show how it is won. The Solver can also provide guidance by declaring "this game is no longer winnable." Then I back up one move and try a different move.

Help me, I've never heard of this game

KPatience comes with a handbook which contains all the information you need to play the various solitaire games included even if you never hard of them before. You can easily access it in the Help menu. This makes KPatience quite useful for learning new solitaire games which you can later play with a real card deck while you're stuck in a winter cabin or similar situations. 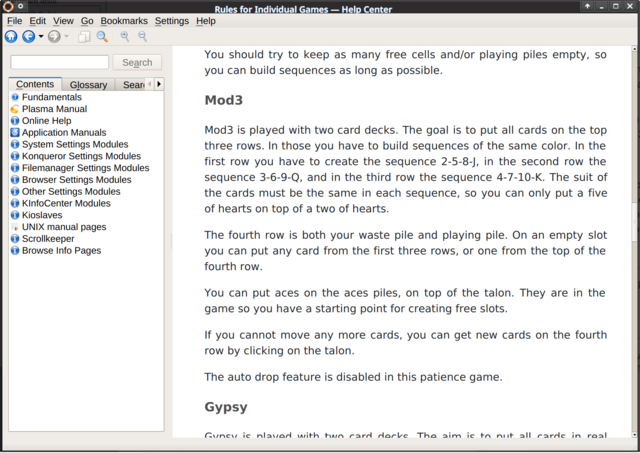 KPatience was originally written in 1995 by Paul Olav Tvete. It was re-written in 2000 by Stephan Kulow and has since been rewritten quite a few times. Here's a screenshot of KPatience for KDE 3.5 side-by-side with the fresh port to KDE 4: 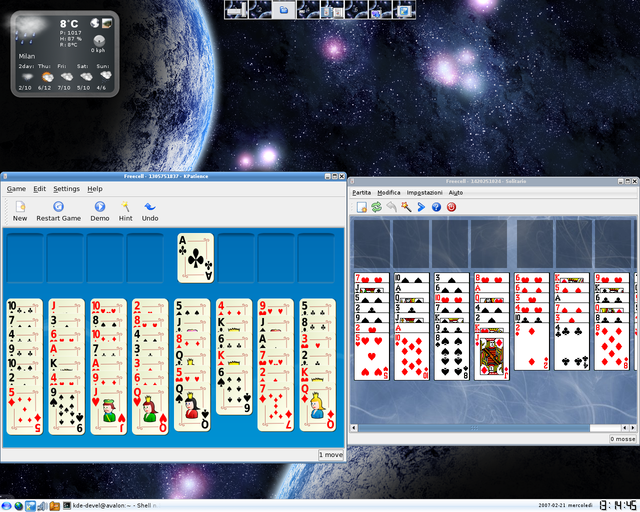 KPatience is a really good solid solitaire card game with a wide variety of games and a helpful manual which lets you learn solitaire games you don't already know. It works fine in any desktop environment. This is a game you want to install if you are setting up a Linux distribution on an older family members computer.

All the GNU/Linux distributions have it available as a package which is either named kpat (most common) or kpatience. There is also a Flathub package called org.kde.kpat.

2 months ago
Score 0
I wish they would restore Calculation to KPatience.

I have this version of Solitaire on my Linux box called 'PySol Fan Club Edition". It's like WinXP's sol.exe on steroids. It's a really good version that, judging from the name, is written in Python. Pretty cool game to check out!

I'm not a dev of the software, just another Linux user sharing my experience.