GIMP 2.99.6 is another development release on the road to a big GIMP 3.0 release with a graphical interface based on GTK 3, a brand new API, a new extension format, Wayland support, year 2038+ compatibility, multi-layer selection and much more. It may be worth a try if you want to know what GIMP 3.0 will be like, but it is nowhere near ready to replace the stable GIMP 2.10.xx branch. 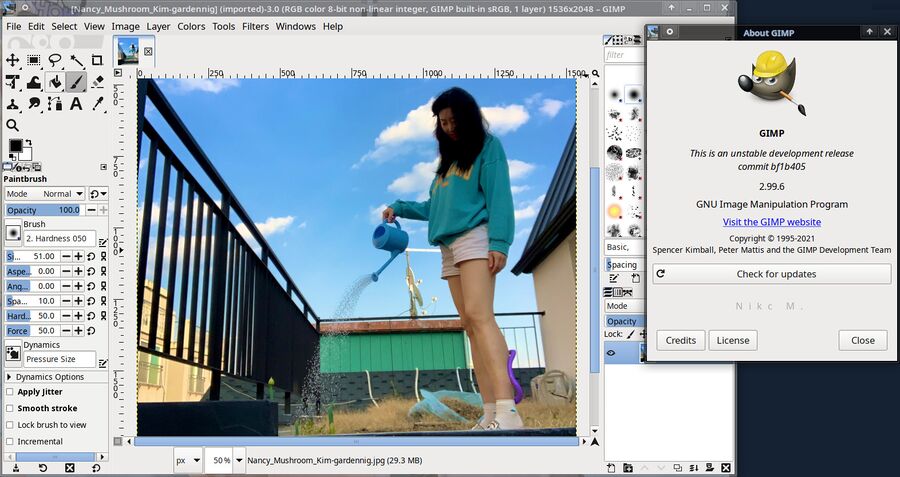 The GIMP 2.99.6 release announcement starts off with a big warning about the currently rapidly changing state of GIMP's new plug-in API:

Reading between the lines in that warning should tell you the most important thing you should know about the latest GIMP 2.99.6 development release: GIMP 3.0 is nowhere near finished, and there is a long way to go before it is. There will likely be many more 2.99.x releases before GIMP 3.0 is ready for prime time. That doesn't mean you can't try it and play around with it, you can. You will find that it is to a very large degree the exact same GIMP as the current stable 2.10.xx series if you try it, there are no gigantic immediately noticeable differences between the stable branch and the development branch in terms of how the GIMP image editor looks, acts and feels if you ignore the interface scaling issues. That doesn't mean they are the same program, there's plenty of smaller and more subtle differences. Some are enjoyable, others may be deal-breakers.

The big highlights in GIMP 2.99.6 are pinch gesture support for touch-screens, off-canvas painting guides, a new template selector in the canvas size selector, better handling of the gAMA and cHRM parts of PNG images anda improved paint select tool. Those are just the features that are new to 2.99.6, there is a lot more in the 2.99.x development branch than the few features introduced in the latest development release.

The new template selector for re-sizing the image canvas using templates in GIMP 2.99.6 is described in the GIMP 2.99.6 release-announcement as:

"It is common usage to resize your canvas to a standard format, for instance paper formats. For this reason, our recent and quite prolific contributor Stanislav Grinkov implemented a template selector in the Canvas Size dialog."

The image canvas can be re-sized using the Image ▸ Canvas Size menu. The Set Image Canvas Size dialog box you get when you choose that menu item does have a new Template selector, but there are no templates available in the GIMP 2.99.6 release so this new feature is, for now, utterly useless and pointless from a end-users perspective. The GIMP developers will hopefully make some actual templates for standard paper sizes, web banner sizes and things like that available by the time GIMP 3.0 is released.

The new pinch to zoom support for those who own touchpads and touch screens is, as of now, only for those using GIMP with the Wayland display server. There is a patch that will likely make it work on X11 available. You are, for now, out of luck if you want to use touch devices with GIMP and you're not using Linux with the Wayland display server. Those using GIMP on X11, Windows and macOS will probably be able to pinch to zoom by the time GIMP 3.0 is released. It looks very much like the X11 patch will get merged in time for GIMP 2.99.7.

The new "Paint Select tool" does not show up when you start GIMP 2.99.6. That's not because they forgot to include it, it is because it is "Experimental". Go to Edit ▸ Preferences ▸ Playground and click the check-box next to Paint Select tool and restart GIMP and it will show up as an icon in the toolbox. 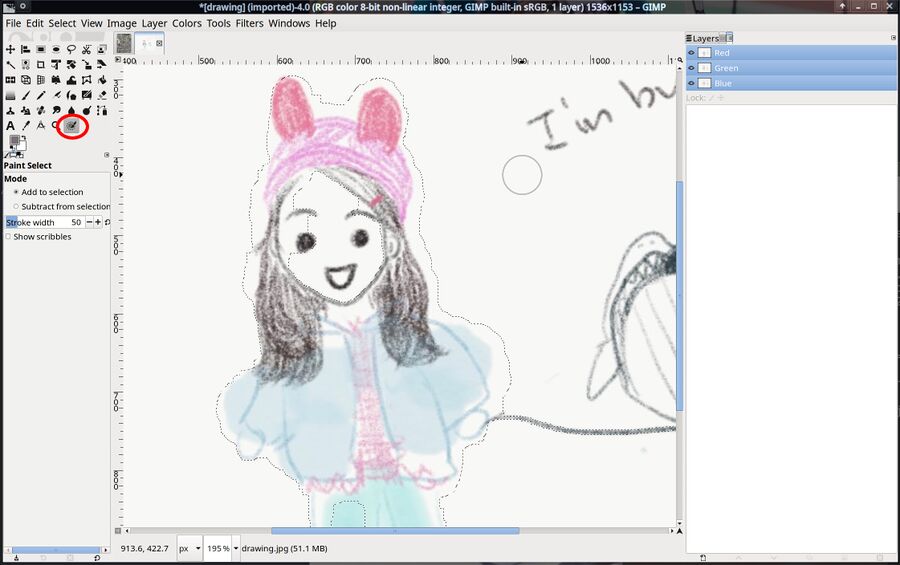 Actually using the new "Paint Select tool" is slightly annoying. It should, in principle, let you draw around and select whatever you draw. One minor problem with it is that it will show a round circle, indicating that a small circle is selected, where you start drawing around. That's all the visible feedback you get when you draw, that one locked circle where you begun drawing. You can still draw around and select whatever you want, you'll just not see what you're doing until you're done. GIMP will then seemingly free for a few seconds and then it'll present what you blindly selected while drawing with no visual feedback. It can be used, but it's clearly not ready for prime time. That's probably why it's a "experimental" feature that's disabled by default. 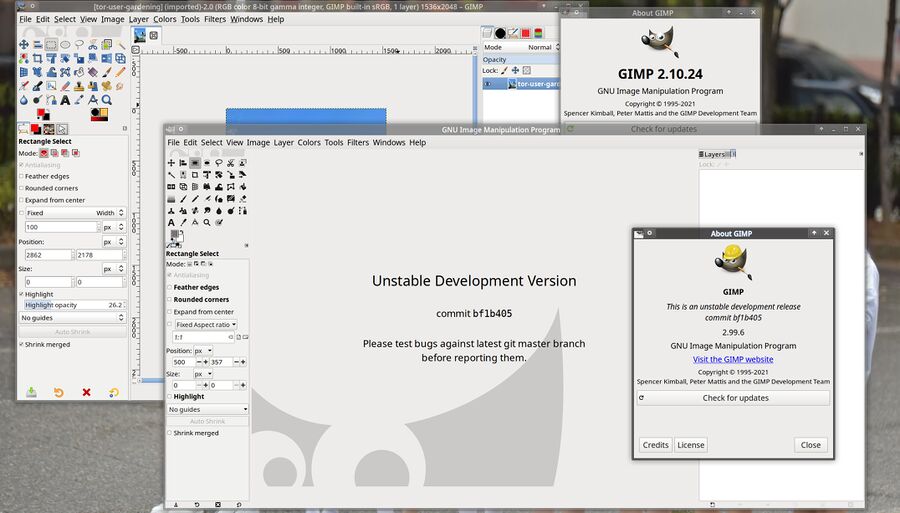 GIMP 2.99.6 is, all in all, a product with many clearly signs of it being a "unstable development release". It works, and you can toy around with it if you are curious what GIMP 3.0 will look like, but it's not something you should upgrade to right now if you use the stable version of GIMP regularly or casually. The broken interface scaling in GIMP 2.99.6 is one example of something that's a deal-breaker, and that's specially true if you are using a HiDPI monitor. GIMP 2.10.24 lets you set your desired icon size in Edit ▸ Preferences ▸ Icon Theme and all parts of the interface scale correctly depending on what size you set there. There is no such option in Edit ▸ Preferences ▸ Icon Theme, or anywhere else, in GIMP 2.99.6. It does detect the displays DPI correctly, and it does apply somewhat acceptable icon sizes some of the time while not scaling at all in other cases. The result is a user-interface that's somewhere between hard and impossible to use. 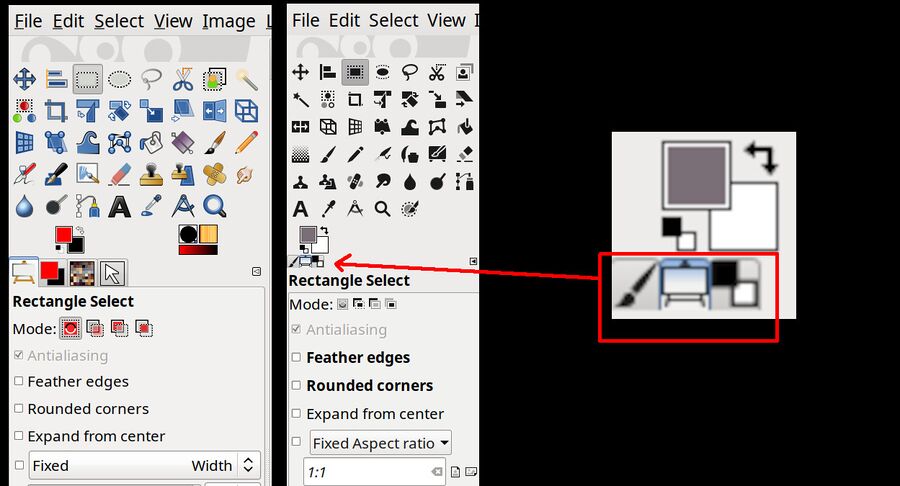 There are a lot of different issues like this with GIMP 2.99.6 that you won't get frustrated by if you stick with the stable version. Remember that it is a development release if you install it, don't expect it to be something usable you can use to replace a stable GIMP version.

Windows users can acquire the GIMP 2.99.6 technology from www.gimp.org/downloads/devel/. There are no 2.99.6 packages available for macOS at this time.

Linux users with distributions that have Flatpak can use the GIMP Flatpak beta repository to install it with:

You can add --user to the flatpak command if you want to install it in your $HOME folder instead of installing it system-wide:

You can simply run

to update all the Flatpak packages, including GIMP, when new beta versions are released.

The Flatpak will install a .desktop file so GIMP 2.99.6 shows up in your desktop environments menu as "(beta) GNU Image Manipulation Program". You can run it manually from a terminal with:

Compiling the source code, which is available at download.gimp.org/mirror/pub/gimp/v2.99/, would be the only choice if you are using one of the few rare GNU/Linux distributions where Flatpak can't be used.

You can visit www.gimp.org/develop/ if you want to get involved with making GIMP 3.0 a great release. It's written in beautiful C, but you don't need to know C to help out. You can write documentation, improve the translation to your native language and help in many other non-programming ways if you don't know C and you'd like to help out.

There is no release-date set for GIMP 3.0, so all we can say for sure is that it's a long way from being anywhere near ready to be released. Mid-2022 is probably a realistic guesstimate.

What about AI accelerated Filtering and that Apple Silicon M1 line of MacOS based offerings! That's some fine NPU on the M1 and that's just one component there of the M1's many different froms of Heterogeneous compute elements in that SOC's hardware in addition to the CPU cores and GPU's Shader cores on the M1. So lets get more focus on PC/Laptop SKUs from Apple and any of the other ARM Chip makers that offer NPUs, DSPs and other hardware based heterogeneous compute elements on their ARM based SOCs for Laptops/PCs.

Apple renewed their IP licensing deal with Imagination Technologies in Jan 2020, and since 2014 Imagination Technologies has had the First Hardware Ray Tracing IP(PowerVR Wizard) and that was years before Nvidia announced their RTX/Turing with Nvidia based Ray Tracing hardware acceleration! So maybe eventually some M1X/M2 Apple Silicon and included Ray Tracing/BVH calculation acceleration hardware and maybe Gimp, Krita, Blender 3D/Other Graphics applications making use of that via some Graphics APIs(DX12, Vulkan, Metal etc.)

So let the Tech Press focus more on these Applications with a stress on that Heterogeneous hardware support for NPSs, DSPs, as Well as CPUs and GPU Compute/Graphics workloads!

6 months ago
Score 0
2022? come ooooooooon, i think im compiling the pre-release from source, thats it...

one month ago
Score 0
gtk3 needs to die and developers need to stop wasting their time chasing it.