Mesa is a swiss army knife of graphics drivers and libraries that are used to provide graphics functionality on all the major GNU/Linux distributions. Mesa 21.1.0 brings Vulkan Variable Rate Shading support for AMD RX 6000 series GPUs, performance increasing graphics optimizations for the OpenGL and Vulkan drivers for both Intel and AMD GPUs, OpenGL 4.6 support in the Zink OpenGL-to-Vulkan translation layer, shader caching for the Lima driver for ARM Mali GPUs and a lot more.

The GNU/Linux Flatpak version of the "Aurora by Excess" PC scene demo from 2018. One of the core Mesa developers is secretly a key member of the Norwegian PC scene demo group "Excess". The demo uses the Vulkan graphics API, through drivers like the Mesa RADV and ANV drivers for AMD and Intel GPUs, to make the graphics appear.

It is almost certain that you are using the Mesa graphics library to render everything graphical if you are using a GNU/Linux distribution with everything other than a Nvidia graphics card. It provides the Vulkan and OpenGL drivers for Intel and AMD graphics cards on x86-64 hardware and a wide variety of other drivers for non-x86 hardware. The latest release is a big one that is packed with interesting features. You wouldn't know from the release-announcement which, due to time constraints, consisted of:

"Mesa 21.1.0 final is now available! There are a lot of new features, but I unfortunately didn't have time to make a list; I'm sure your favorite news website will pick up the slack."

He probably didn't mean us, but we decided to do that homework assignment anyway.

135 different people from Valve, Google, AMD, Intel, Redhat, Collabora and other corporations contributed to this release. The joint efforts of Valve assets Mike Blumenkrantz, Samuel Pitoiset, Rhys Perry, Connor Abbott and Daniel Schürmann made the Valve corporation the by-far biggest contributor to Mesa 21.1.0. The top 20 contributors by code commits (not lines of code) were:

The above list is just the top 20 contributors, they do not make the 115 other people made code commits less important.

The perhaps most interesting feature in this Mesa release is Variable Rate Shading support for those with the very latest AMD graphics technology. This new Mesa feature depends on hardware support that is only found in the very latest RX 6000 series GPUs from AMD.

Variable Rate Shading is a magic trick that decreases GPU load, thus increasing the frame rate, by doing shader operations in pixels blocks of 2x2, 1x2 or 2x1 instead of doing them one pixel at a time. This magic trick isn't as magic as it may sound, there is a noticeable visual impact if you do this across the board. The Mesa developers have therefore come up with some trickery that decides when variable rate shading is enabled if the feature, which is optional, is enabled with RADV_FORCE_VRS=value (RADV_FORCE_VRS=2x2, RADV_FORCE_VRS=1x2, etc). The goal of their trickery is to boost performance with variable rate shading when it is possible to do so without any very apparent loss of quality while temporarily (or in some games, permanently) disabling the feature when the RADV driver thinks the visual quality is reduced to a point where it would be very apparent. The end-result is that some games get a 30% performance boost all the the time, some get a performance boost some of the time and some games won't see much of a benefit at all. Variable rate shading is not enabled by default and it is still considered to be a somewhat experimental features. You can enable it and try it with the RADV_FORCE_VRS=value is you have a shiny new AMD RX 6000 series GPU. The hardware support this feature requires is simply not there in older AMD graphics chips, so there will be no such support "back-ported" to older AMD graphics cards.

The Variable Rate Shading was done by Samuel Pitoiset at the behest of the Valve corporation.

The previously introduced Mesa support for a resizable graphics memory bar, or "smart access memory" as AMD likes to market it, can be now force-enabled on seemingly unsupported systems. That does not mean you can force-enable this feature on any old computer like that Athlon II with a Radeon 7850 GPU you may or may not have in your spare bedroom. This feature is only supported by AMD on AMD 5000 series processors sitting on a motherboard with a B550 or a X570 chipset. There are machines, specifically newer ones with Intel motherboards, that can safely use this feature even if Mesa does not identify those (specially non-AMD) machines as being supported. You can now set the special variable RADV_PERFTEST=sam to make Mesa try to force-enable the resizable graphics memory bar feature in Vulkan games and applications. It may or may not do something depending on what hardware you have available. A brand new graphics card is not required, it can work on older AMD GPUs, but a new CPU and motherboard with SAM support is required.

Both the RADV and ANV Vulkan drivers for AMD and Intel graphics chips have gained support for the VK_KHR_workgroup_memory_explicit_layout Vulkan extension, which allows shaders to explicitly define the layout of workgroup storage class memory and create aliases between variables from that storage class in a compute shader, and the VK_KHR_zero_initialize_workgroup_memory extension which allows the use of a null constant initializer on shader workgroup memory variables. The proprietary Nvidia Display Driver for Linux gained support for both of those extensions with the release of version 465.24.02 on April 14th, 2021. 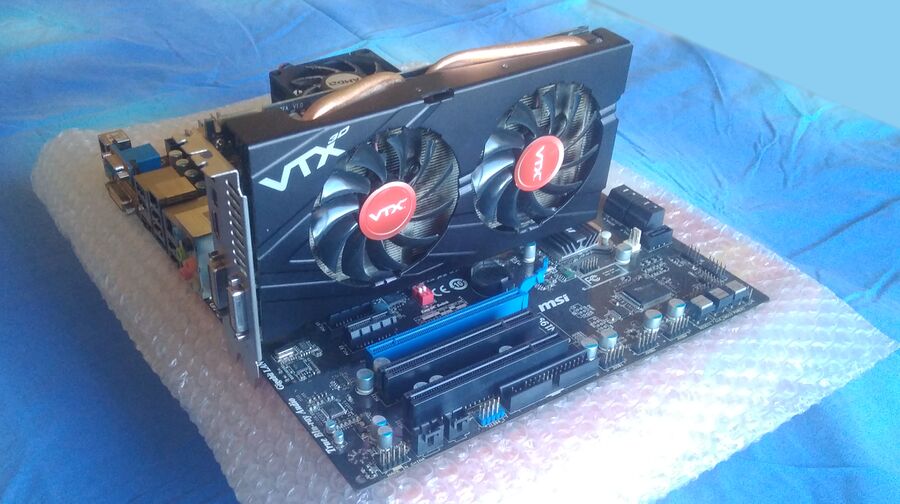 A VTX3D Radeon HD 7850 Vchamp 2GB GDDR5 on a MSI AM3 motherboard. It's very old, yet it's fully capable of running Vulkan games thanks to the modern Mesa RADV Vulkan driver for AMD GPUs.

The Mesa RADV Vulkan for AMD graphics cards driver finished our RealSR 20 anime girls with questionmarks four seconds faster than Mesa 21.0.1 did while AMDVLK 2021.Q2.2, released slightly more than a week ago, finished the test 9 seconds slower than AMDVLK 2021.Q2.1. There was no change in Mesa RADV performance in the waifu2x-ncnn-vulkan image up-scaling test, it performed about the same. AMDVLK 2021.Q2.2 showed a performance regression in that one as well.

The Mesa RADV Vulkan driver has always been far superior to the AMDVLK driver in compute tasks and that's still the case. Mesa is the obvious choice if you want to do Vulkan compute on an AMD GPU.

"Most of the arm drivers got a lot of internal work too. as did amd and intel. A lot of Marek Olšák's draw overhead reduction work landed.

Zink is a pretty neat technology that lets any graphics system capable of rendering Vulkan run OpenGL applications at a price. You can think of it as DXVK (a translation layer that allows Wine to render DirectX 9-11 with Vulkan) at a graphics stack level.

Mike Blumenkrantz, the top contributor to Mesa 21.1.0, made a long list of commits to the Mesa Zink driver during this release-cycle. He was not alone, Erik "Kusma" Faye-Lund, Adam Jackson, Antonio Caggiano, Bas Nieuwenhuizen, Dave Airlie, Eric Anholt, Hoe Hao Cheng and Michel Zou all contributed to bumping Zink OpenGL compliance from 4.1 to 4.6 in this release. It is now at a state where you can pretty much run any OpenGL game or application on any system with a feature-complete Vulkan driver.

Zink could potentially be very useful hardware vendors and others who would like to have OpenGL available on their shiny new platform without having to develop a specific driver for it, investing in a decent Vulkan driver would be enough now that Zink can provide OpenGL functionality "for free". It is not as free at is may sound, there is a heavy performance-penalty attached to Zink:

You can test Zink by running applications with the MESA_LOADER_DRIVER_OVERRIDE=zink variable:

You will also need DISABLE_MANGOHUD=1 if you use MangoHud because it won't play nice with Zink; you will, in fact, not be able to use Zink if you have MangoHud installed unless you disable it.

Lavapipe is a CPU software driver for Vulkan. 121 commits were added to it since since Mesa 21 was released in March.

"Lavapipe got a ton of work and is now credible enough that we test zink with it in ci. most of the arm drivers got a lot of internal work too. as did amd and intel."

Lavapipe is now Vulkan 1.1 compliant and capable of running most Vulkan games and applications. Rendering on Vulkan graphics on a CPU with Lavapipe is really slow, it is not something that provides an alternative to having a graphics card. It is nevertheless a pretty interesting technology from a purely technical point of view.

It is possible to use Gallium Nine with Wine using the "Gallium Nine Standalone" library available from github.com/iXit/wine-nine-standalone. Will have to manually install it yourself unless you are using Slackware, Gentoo or Arch. It's not hard, you just have to download and extract the binary package into your $WINE_PREFIX folder and run a nine-install.sh script. It doesn't play well with other DX9 add-ons like DXVK, we recommend using a dedicated $WINE_PREFIX for the DirectX 9 games you want to run with Gallium Nine.

Wine with Gallium Nine is, mostly, slightly faster than DXVK and it is a lot faster than Wine's built-in wined3d DX9 implementation.

The Mesa Clover OpenCL driver got a lot of improvements from Aaron Watry, Dave Airlie, Edward O'Callaghan, Jérôme Glisse, Karol Herbst, Serge Martin and Vinson Lee. It is still only OpenCL 1.1 compliant - on paper, anyway. The OpenCL features CL_IMAGE_ELEMENT_SIZE, CL_IMAGE_ELEMENT_SIZE, CL_IMAGE_NUM_SAMPLES, CL_MEM_OBJECT_IMAGE1D and clEnqueueSVMMigrateMem have been implemented and Clover is well on it's way to being OpenCL 3.0 compliant. Getting it fully OpenCL 2.0 is, of course, something that needs to happen before that - and it's not in this Mesa release. The practical result of the changes to Clover since Mesa 21.0 is a far less usable OpenCL implementation. LuxMark works fine with Clover from Mesa 21.0 as long as you disable the -d-fast-relaxed-math "optimization". Disabling -d-fast-relaxed-math is also needed for the AMD ROCm OpenCL implementation.

Clover from Mesa 21.1 rendered a garbled image with 95% "wrong" pixels in the LuxMark 3.1 benchmark. That's a rather unfortunate regression. All the new OpenCL features don't do much good when the end result is a unusable product.

The Mesa Lima driver (docs.mesa3d.org/drivers/lima.html) for Mali-400 and Mali-450, but not Mali-470, got a big improvement that reduces the apparently previously very long waiting times in GTK applications by a lot.

"GTK doesn’t take 18s any more to display the first frame under Lima, that is my personal highlight in Mesa 21.1.0"

Anonymous sources familiar with the matter

Erico Nunes and Vasily Khoruzhick stood for most of the 26 new commits to the commits to the Lima driver. Eric Anholt contributed a few, Qiang Yu contributed one and Vinson Lee fixed some typographical errors. The most notable commits to Lima were "implement GL_EXT_texture_swizzle", "introduce fs and vs shader cache" and "implement shader disk cache". The two latter should improve performance in games since caches are faster.

Boris Brezillon and Alyssa Rosenzweig, author of "Software freedom isn’t about licenses – it’s about power", contributed a really long list of commits to the Panfrost driver for Mali graphics chips found in many Chromebooks, the Pinebook Pro and other ARM devices. The bullet summary is that those with Mali GPU devices get more features and better performance.

The Mesa developers have already begun developing the next major Mesa version and it could, possibly, have some interesting features.

We merged the initial support on Sunday."

Mesa 21.2 will likey be released with support for the graphics chips on the new ARM based Apple M1 machines. She is a skilled ARM developer who has basically written entire graphics drivers for that platform all by herself, so it is very likely be finished in time. It is not certain, just likely, and there is no way to tell until Mesa 21.2 is released on three months time.

What about B450 and X470 boards that received BIOS updates that enabled resizable BAR?

6 months ago
Score 0
based valve doing more for amd gpu's than amd.