Big technology corporations with a vested interest in controlling "open source" software, and FOSS organizations they directly or indirectly fund, wrote a "open letter" viciously demonizing Richard Stallman after he announced that he will be returning to the Free Software Foundation's board in a live stream at the LibrePlanet 2021 virtual conference. Actual free software users wrote a competing open letter supporting Stallman in response. More than 3600 people have so far signed on to that letter, which is far more than the corporations and the 白左 bullies working for them have gathered. 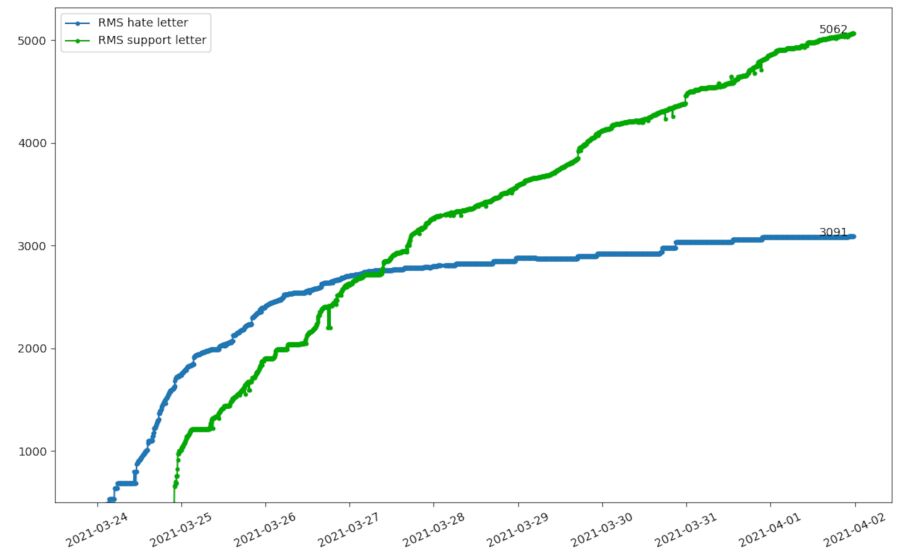 Honorary doctor Richard Stallman is the man who popularized free software. He wrote the GNU General Public Software license. He founded the GNU Project in 1983 and the Free Software Foundation in 1985. He has written many important pieces of software such as the GNU Compiler Collection (gcc) and the emacs editor. Stallman was born on March 16th 1953, he is now 68 years old.

Richard Stallman has always been a firm supporter of computer users' rights and freedoms. He has, many times, said that every computer user should have four essential freedoms. These freedoms are what, according to Stallman, defines free software.

"A program is free software if the program's users have the four essential freedoms:

gnu.org: What is free software? The Free Software Definition

Not everyone agrees with these ideals and values outlined above. "An open letter to remove Richard M. Stallman from all leadership positions", mostly written by GNOME Executive Director Neil McGovern, states that:

"There has been enough tolerance of RMS’s repugnant ideas and behavior.

We urge those in a position to do so to stop supporting the Free Software Foundation. Refuse to contribute to projects related to the FSF and RMS."

"An open letter to remove Richard M. Stallman from all leadership positions"

That "Open Letter" was written shortly after Richard Stallman announced that he will be returning to the Free Software Foundations board in a live-stream during the virtual LibrePlanet 2021 conference.

The letter goes on to viciously attack Richard Stallman with vague and unsubstantiated claims. The letter does, for example, falsely claim that Stallman is "transphobic".

"Richard Stallman is not transphobic at all."

Leah Rowe, the founder of Libreboot and a trans-person and who has met Stallman on many occasions
on March 28th, 2021

The anti-Stallman letter also accuses him of being a "misogynist". Sylvia Paull, a Silicon Vallay publicist, described her impression of him this way in a medium-post titled "Richard Stallman Has Been Vilified by Those Who Don’t Know Him":

"When I met Richard Stallman at least 25 years ago, through a mutual friend mentioned who said Richard could use a publicist, I was only too willing to help. For many years, he became my pro bono client because I believe in the mission of the Free Software Foundation and his life’s investment in that mission of free software, which indeed has made the world a better place. I even put up Richard at my home — the one I then shared with computer editor and writer Fred Davis — for a week, and found out more about him. He was kind, attentive, and has a loving core."

It is true Stallman has written a few controversial and unfortunate things over the years. He has, for example, implied that having sex with minors is alright as long as they consent more than once. He changed his mind about this a few years ago.

"Many years ago I posted that I could not see anything wrong about sex between an adult and a child, if the child accepted it.

Through personal conversations in recent years, I've learned to understand how sex with a child can harm per psychologically. This changed my mind about the matter: I think adults should not do that. I am grateful for the conversations that enabled me to understand why."

stallman.org: "Sex between an adult and a child is wrong"
September 14th, 2019

We can only speculate as to why the Tor Project, the EFF, Red Hat, SUSE and the GNOME Foundation all disagree with Stallmans current view on this particular subject. It is also unclear why over two thousand individuals signed a letter in disagreement with that statement. We do know that some did it because they were pressured by their employer or others in their organization, some were simply bullied into signing by 白左 activists and then there's likely a few misguided people who actually believe it is morally good to be part of a cancel culture hate-mob.

The mainstream tech media may have a thing or two with it. The timeline of the events leading up to that letter shows a pattern of regular shameless libel against Richard Stallman from technology "news outlets" with close ties to Microsoft.

"History shows that inquisitive minds are not always welcome, specially when they challenge religious, ideological, or political views. If these minds choose not to self-censor, they need to be ready to suffer severe punishment."

As for the hateful letter itself, it is mostly written by GNOME Foundation president Neil McGovern with a little help from Joan Touzet, Elana Hashman and Molly de Blanc.

reveal that the vicious letter is written by:

(126 commits by "neilmcgovern" were added to "Neil McGovern", they are likely the same McGovern)

Many organizations, such as the GNOME Foundation, Mozilla, OBS Project, Outreachy, Open Source Collective, SUSE, the Tor Project and the X.org Foundation, have all given their support for a vicious letter which essentially equates to mob bullying of an elderly man with Asperger's who spent his life fighting for rights and freedoms.

A parody of the anti-Stallman letter titled "Stallman must be removed" illustrates its essence in a to-the-point way:

"We, the undersigned, believe in the necessity of digital autonomy and the powerful role user freedom plays in protecting our fundamental corporate rights. In order to realize the promise of everything software freedom makes possible, there must be radical change within the community: Chop off the de-facto sole head of the movement. We believe in a present and a future where all technology empowers — not oppresses — corporations to do as they desire with the rights of people. We know that this is only possible in a world where technology is built to people’s rights at its most foundational levels. While these ideas have been popularized in some form by Richard M. Stallman, he does not speak for us at the corporate level because of definitely related comments that have to do with software. "

The Grass-roots Support For Richard Stallman Is Overwhelming 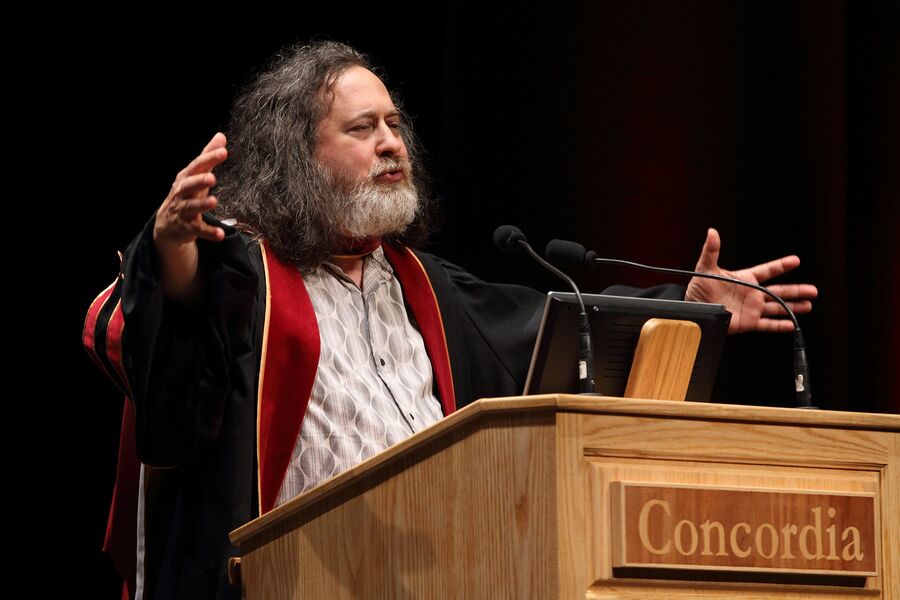 "Richard M. Stallman, frequently known as RMS, has been a driving force in the free software movement for decades, with contributions including the GNU operating system and Emacs.

Recently, there have been vile online attacks looking to remove him from the FSF board of directors for expressing his personal opinions. We have watched this happen before in an organized fashion with other prominent free software activists and programmers. We will not stand idly this time, when an icon of this community is attacked.

FSF is an autonomous body that is capable of treating its members in a fair, unbiased fashion, and should not give in to external social pressures. We urge the FSF to consider the arguments against RMS objectively and to truly understand the meaning of his words and actions."

You can read the full "An open letter in support of Richard M. Stallman" at rms-support-letter.github.io.

The letter in support of Richard Stallman has so far reached 3603 signers and the number is growing. Please consider signing it in one of three ways if you use and/or support free software and support those who, unlike the big "open source" tech corporations, actually value and promote free software ideals. You can do so in any one of three ways:

It is great to see that there is far more support for Richard Stallman and the true free software movement than there is hate. It would be even nicer if the supporters were outnumbering the haters 10:1.

Thank you for the fantastic article. As a person on the "true" left I despise corporate meddling and government oversight (although where one ends and the other begins...). It is disgusting to see how these supposed "left" bootlickers are carrying themselves, in bed with the enemy, attacking the very individual who fought for their rights to do so, on such false, flimsy and easily disproven claims. Some other literature for anyone interested in the truth of the matter: https://www....l-we-the-web https://jorg...ice-for-rms/ https://ster...s.github.io/

See 6250+ Free Software Users Have Signed A Letter In Support Of Honorary Doctor Richard Stallman And The FSF Stands By Their Re-Election Of RMS To Their Board for a newer graph.
Permalink
Latest News Headlines See the more archive for news stories
Retrieved from "https://linuxreviews.org/w/index.php?title=Grass-roots_Richard_Stallman_Support-Letter_Has_Reached_3600%2B_Signers&oldid=19927"
Categories: