New Versions Of The GNUstep Base Library, GUI library, GUI Backend And GNUstep Gorm Are Released

The GNU project has released several new versions of libraries that are a part of a mysterious project of theirs called "GNUstep". The "GNUstep" is not a desktop environment or a window manager or an application suite, it is, apparently, just a collection libraries you could use to make those things. The latest GNUstep libraries may be worth exploring if you are a developer who wants to use a graphical toolkit that's not Qt or GTK to create applications that are suitable for those square computer monitors with a 800x600 pixel resolution that were trendy in the early 1990s. 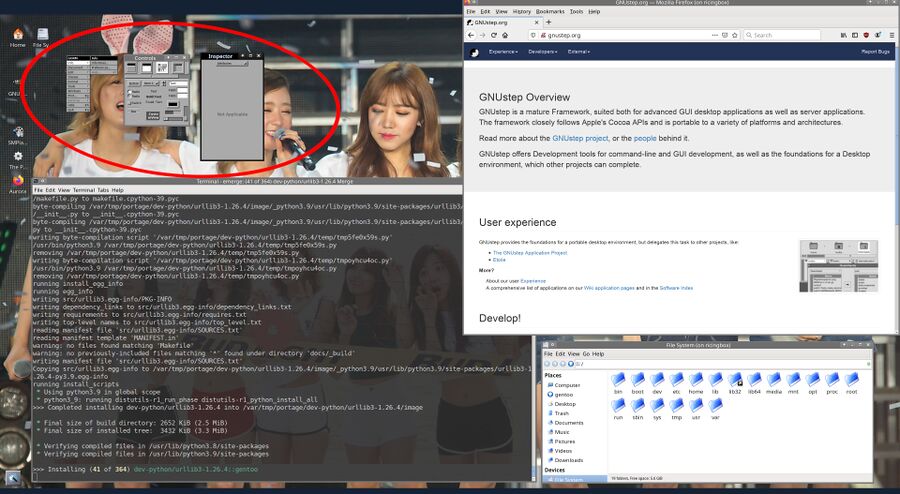 Gorm version 1.2.26 on Gentoo Linux. It's hard to tell, but it's the tiny thing circled in red.

The GNU Project released five new packages you've probably never heard of for something called "GNUstep" last week. Those are:

So What's A GNUstep?

The first thing that came to mind when GNUstep developer Ivan Vučica sent us a series of release announcements about it was Let's compile this GNUstep desktop environment and give it a try.. That's not possible because GNUstep it is not a desktop environment or a window manager, it is a application framework somewhat similar to GTK, Qt and wxWidgets.

There does not appear to be any interesting functional and usable software for casual computer users based on it even though this "GNUstep" thing has been in development for 30 years. There are GNUstep programs you can compile and try, and the new Gorm release is one of them.

Gorm, short for "Graphical Object Relationship Modeller", is a program that lets you make graphical GNUstep programs that are, like Gorm, only suitable for those huge square computers monitors that were common in the 1990s. The reason seems to be that Gorm, and GNUstep in general, is modeled after some obscure piece of software called the "NeXTstep Interface Builder" that was released by some equally obscure American corporation called NeXT Computer" in the early 1990s. They've re-created the "NeXTstep Interface Builder" with what pixel perfect accuracy, and it doesn't scale, so it's impossible to see what the text in the menus say or what the GUI is about on a modern computer monitor. 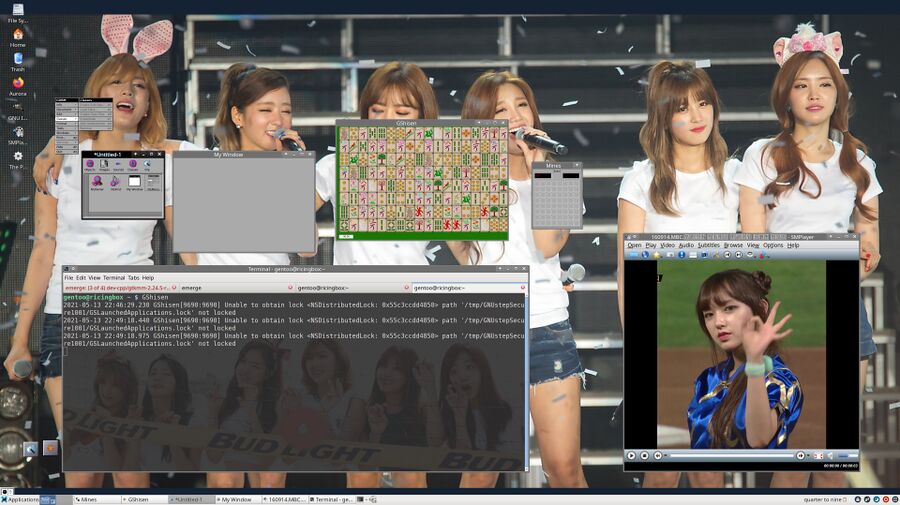 The rest of the new GNUstep releases, "Base Library 1.28.0", "GUI Backend 0.29", "GNUstep GUI Library 0.29" and "GNUstep Makefile Package 2.9.0", are all libraries that can be leveraged to make GNUstep software using the Gorm interface builder.

There are those who are trying to make some serious software based on those GNUstep libraries. The Étoilé project is one of them, their story is that:

"Étoilé intends to be an innovative GNUstep based user environment built from the ground up on highly modular and light components with project and document orientation in mind, in order to allow users to create their own workflow by reshaping or recombining provided Services (aka Applications), Components etc. Flexibility and modularity on both User Interface and code level should allow us to scale from PDA to computer environment."

The Étoilé Project's website's footer says Copyright © 2010 Étoilé Project. and it does not appear to have been updated since. You can visit http://etoileos.com/etoile/ if you want to learn more about this endeavor. That website is, of course, not available over HTTPS since they didn't have HTTPS in the early 1990s.

You can head over to http://www.gnustep.org/ (also only available using HTTP, since, again, they didn't have HTTPS in the early 1990s) if you want to contribute to the GNUstep project or just give the GNUstep developers a few pointers like the current date and the current state of computer hardware. It's not the 1990s anymore, Michael Jackson is dead and Madonna's become an old unattractive lady, and no amount of botox and plastic surgery is going to make her relevant once again. Trying to re-create the 1990s is pointless. The 1990s were not particularly interesting, and there's nobody alive today who wants to go back to using PDAs and pagers. There are some young misguided people who write long forums posts about their love for CRT computer monitors, but the truth is that they were horrible compared to today's technology and nobody who every used one daily would even remotely consider going back to using a CRT monitor with a 800x600 pixel resolution so they can use applications based on this ancient-looking and long-outdated GNUstep framework that a handful of developers have spent 30 years developing without realizing that computer hardware evolved during that time.

Basic display scaling support would, at least, make it possibile GNUstep applications on modern computer displays. Not that it would help all that much, you can't really fix that horrible 1980s/early 1990s look and feel all the GNUstep applications share without throwing it all away and starting over.

Yeah, GNUstep needs some more features like display scaling. But the goal (and yes you can just theme it to make it look more modern) is not to make the 90s UI to make a revival; it's goal is to make the APIs that uses macOS and iOS available on Linux (...).

GNUstep is themable. It can be made to look almost exactly like macOS X/macOS 11. Check this out...

Also, as detailed below, Scaling is implemented, but perhaps not well documented. ;)
Permalink
You are ignoring the author of this comment
Show comment | Manage ignore list

It actually requires all of GNUstep (base, gui, back) not just gnustep-make.
Permalink
You are ignoring the author of this comment
Show comment | Manage ignore list

I am the GNUstep maintainer along with a few others. I would just like to clarify a few things. GNUstep is far from mysterious, it has been in development for 20+ years. Also, GNUstep does have scaling support. You can set the default GSScaleFactor to whatever you like to make it work properly like so:

where x is some number. So, it's not just for old, square 800x600 monitors from the '90s. What's going on with your installation is that it is not fully configured. Admittedly this could be better documented and that is something we ARE working on. The project consists of about 20 people so it's a lot to keep up with as you can imagine. I thank you for writing this article and, hopefully, future articles about the project will be much more accurate. Please feel free to as questions. You can reach me at greg.casamento@gmail.com for more information. I will gladly provide any help, advice, information about the project.