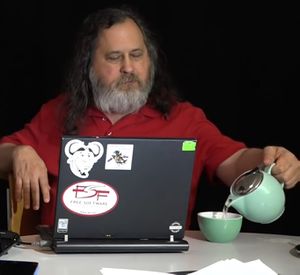 Honorary doctor Richard Stallman is a free software activist who will be seen as one of the most important figures in the late 20th century. He started the free software movement in 1983 and he begun creating the GNU operating system in 1984. Stallman founded the Free Software Foundation in 1985.

The Father of the Modern Free Software Movement

"When we call software “free,” we mean that it respects the users' essential freedoms: the freedom to run it, to study and change it, and to redistribute copies with or without changes. This is a matter of freedom, not price, so think of “free speech,” not “free beer.”"

Stallman founded the GNU Project 1984 as well as the Free Software Foundation the following year. He served as the president of the FSF until 2019. He is the principal or initial author of GNU Emacs, the GNU C Compiler, the GNU Debugger GDB and parts of other software packages found in most GNU/Linux operating systems.

Recognition for his work includes:

"Richard does not relate to people in the way most of us do. Most of us put up a shield between ourselves and others. We act the way they expect us to act, whether we really empathize with them or share their point of view. This is what we have learned is the way to get ahead in life. Richard does not seem to have developed this shield. He takes everything literally and doesn’t necessarily take feelings and the reactions of others into account when making statements that are outside the bounds of his expertise in free software."

Sylvia Paull on Richard Stallman's personality in a medium post on September 27th, 2019

On free software with restrictions:

Authors of such restrictive software argue that it is still free software because more technically adept users are able to download the source, remove the built-in censorship blacklists and recompile their own non-censoring version.

Others argue that the distributed binaries are not free software even though they have a GNU GPL license because they do place restrictions on the user, restrictions most of the people using the software are not able to by-pass since they do not know how to compile software.

"Someone can publish a modified version which works with any web site, and distros can include that. Then non-wizard users will get around those restrictions."

On the importance of using Copyleft licenses:

"LLVM is a big step backwards from GCC because it is not copylefted.

That has been a major setback for our freedom. Nvidia took advantage of it to make a nonfree oompiler based on LLVM, and conceal the processor's instruction set. It was able to keep all the users under its domination because of LLVM."

Richard Stallman is featured in the documentary film Revolution OS.

Richard Stallman gave this statement when we asked for a comment on the IEEE's decision to freeze out Chinese scientist from their organization:

"I am not sure what that means, concretely. So all I can say is that China is a tyranny that is a harmful influence in the world."