AMDVLK 2020.Q4.1 Is Released With A New Vulkan Extension And Three Game-Specific Fixes

AMD has released a new version of their AMDVLK Vulkan driver for Linux with support for one new Vulkan extensions and game-specific fixes for Wolfenstein II: The New Colossus, Second Extinction and X-plane. Performance is still overall worse than the AMD RADV Vulkan driver that comes with Mesa 20.2.0 and performance is much worse in specific graphics benchmarks and image up-scaling.

AMD's release note story for AMDVLK 2020.Q4.1 is that it updates the Vulkan API to 1.2.156 (the latest Vulkan specification is 1.2.158) and adds support for the VK_EXT_shader_image_atomic_int64 Vulkan extension. They also list three game-specific fixes and one regression:

AMDVLK's performance has long been sub-par compared to Mesa's RADV driver. That's the driver GNU/Linux distributions ship with, AMDVLK is optional. AMDVLK is much closer to the Windows-driver than Mesa's RADV and compatibility may be a reason to install the latest and greatest AMDVLK 2020.Q4.1 driver. Performance is, as you will see if you read on, not a reason to install it. 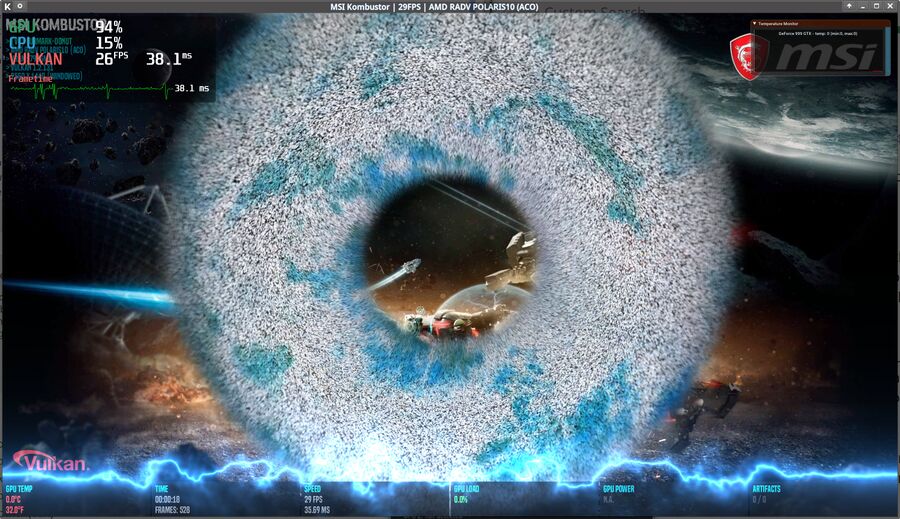 Mesa's RADV driver has long been close to equal with AMDVLK except in the TessMark scenes. AMDVLK 2020.Q3.5 and 2020.Q3.6 failed miserably in MSI Kombustor's TessMark scenes and that's still the case with AMDVLK v2020.Q4.1. Whatever Vulkan extensions MSI Kombustor is using for those will clearly have a very negative impact on gaming performance.

The MSI Kombustor are basically the same with the TessMark scene being a notable exception. 50 or 51 FPS isn't something to write home about.

Mesa 20.2 was notably faster than AMDVLK v-2020.Q3.6 in our waifu2x 100-anime-girls-with-questionmarks and realsr-ncnn-vulkan 20-anime-girls-with-questionmarks image up-scaling benchmarks. That's still the case with AMDVLK 2020.Q4.1. waifu2x is very good at up-scaling cartoons and images of that nature 2x while RealSR is great for up-scaling any image by 4x. The results are notably better than what you get if you use convert from ImageMagick or just re-size an image using GIMP or similar software. You will rarely, if ever, need to upscale hundreds of images, and the difference is negligible if you up-scale a single image. The difference is pretty significant if you ever do need to up-scale hundreds of images with RealSR.

Mesa RADV is faster at waifu2x image up-scaling using Vulkan. The difference between the two is a bit smaller than it is in the realsr-ncnn-vulkan RealSR implementation.

AMDVLK can be installed side-by-side with Mesa's RADV driver in case you want to try both. Most games and applications will see the drivers as two different graphics cards and let you choose (with a parameter like -g in the case of realsr-ncnn-vulkan) what to use. Game compatibility would be the only reason to install AMDVLK, if a game has glitches with the AMD RADV driver then perhaps AMDVLK won't. Hardware is no reason to consider it, it works with less hardware than Mesa's RADV driver (AMDVLK won't work with certain APUs like the AMD Athlon 5350 while Mesa's RADV will).

Source code and binary versions of the new AMDVLK 2020.Q4.1 Vulkan driver for Ubuntu and CentOS/RHEL/Fedora can be acquired from the AMDVLK releases page at GitHub.