Socket AM1 (also known as FS1b) was a AMD motherboard socket for a line of low-end system-on-a-chip processors with integrated chipset and graphics. AMD released a total of five APU processors for socket AM1, three branded Athlon two branded Sempron, when it was launched in 2014. The platform was quickly abandoned.

AM1 APUs belong to what AMD calls the "Kabini" family. They use the Jaguar microarchitecture. The Linux kernel refers to these chips as family 22. 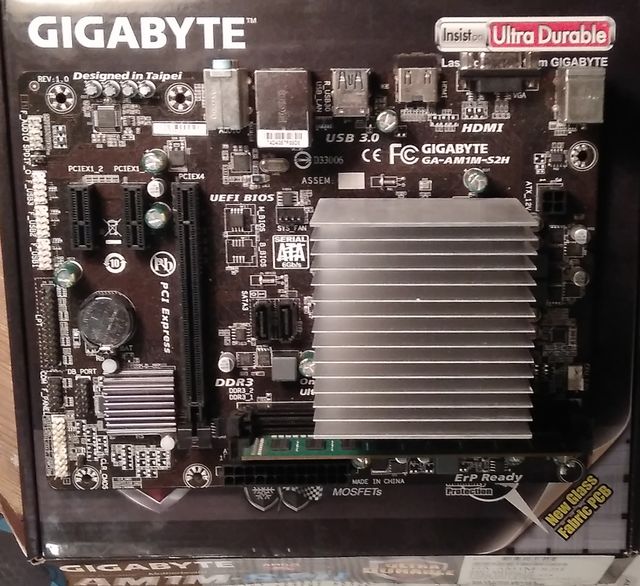 Gigabyte AM1M-S2H AM1 motherboard with a passive heatsink.

AM1 motherboards were small and limited compared to regular ATX and micro-ATX motherboards for other platforms. Most of them had just 2 SATA 6Gb/s connectors, some had 2 additional connectors connected to a third-party SATA chip. More importantly, AM1 motherboards had one PCI 2.0 x16 slot running at x4 and one or two PCI 2.0 x1 slots.

All AM1 processors have a very low TDP of 25W. They can all be passively cooled with a relatively small and cheap passive heatsinks like the Arctic Alpine M1 (The included box cooler did come with a fan). That made it possible to use it as a basis for entirely silent HTPCs.

All the AM1 processors have two clear disadvantages, one of whom was well-hidden in the marketing material when the chips were launched:

The lack of HEVC video decoding is a third disadvantage which became more relevant after the AM1 platform launched. The CPU is too weak to decode HEVC at 1080p and the GPU is limited to x264 (AVC) video decoding.

Linux kernels will by default work fine with AM1 series APUs. However, the GPU driver will default to using the radeon kernel module for the GPU part of AM1 processors. It works fine but it is not optimal for AM1 series APUs. The Mesa RADV backend will only work with the newer amdgpu kernel driver. amdgpu will also perform slightly better than radeon using the OpenGL RadeonSI backend. The Unity WebGL benchmark, using Chromium 79, scores 27400 with radeon and 28700 with amdgpu on a Athlon 5350. The difference is not huge, but it's there.

It is possible to instruct the kernel to use the amdgpu kernel driver for AM1 APUs by adding this to the kernel comand-line (in /etc/sysconfig/grub):

Hardware video encoding and decoding works with both radeon and amdgpu. That is typically not the case, AMD has not released amdgpu compatible UVD firmware for most of their older graphics chips. The Kabini family is one of the exceptions where amdgpu can be used with all the features intact.

Building either radeon or, preferrably, amdgpu into the kernel requires firmware for the APU part built into the kernel. You can see what firmware is required by issuing either echo radeon/kabini_{ce,me,mec,pfp,rlc,sdma1,sdma,uvd,vce}.bin or echo amdgpu/kabini_{ce,me,mec,pfp,rlc,sdma1,sdma,uvd,vce}.bin from the /lib/firmware directory.

Most AM1 motherboards will typically have a iTE I/O Controller Chip with hardware sensors. That chip is supported by the it87 kernel module.

The AM1 APUs can be used for causal web browsing and very simple gaming. You can play SuperTuxKart at 1080p at low settings but do not expect most games from the Steam catalogue to work. No HEVC video decoding and a PCIe 2.0 x4 on the x16 slots means you can't solve that one with a dedicated GPU.

If you can get one for free and you need it for casual web browsing or a two-drive NAS then a AM1 system is probably worth picking up even in 2020. Do note that by "worth picking up" we do mean that it would be worth picking one up if it is sitting on the curb with a "free stuff, take what you want, it is heading to a landfill" - paying anything but peanuts for a AM1 system is not worth it.