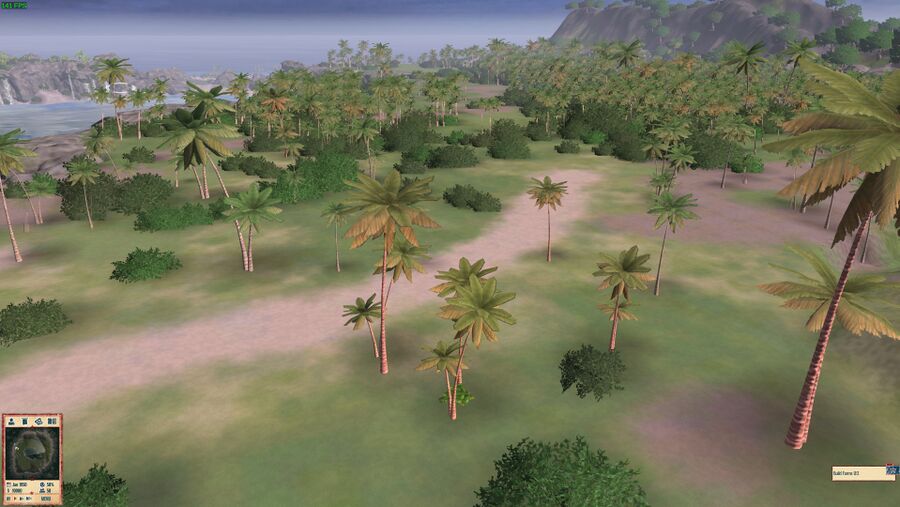 Tropico 4 demo installed from Steam running on GNU/Linux using Proton 5 and the Mesa 20.2.0~rc4 RADV Vulkan driver for AMD graphics cards, not the special "open" AMDVLK driver which contains a fix for this game in the latest 2020.Q3.5 release.

AMDVLK is a special MIT licensed "open source" AMD graphics driver for Vulkan released regularly by AMD in the form of binaries and regular source code dumps on Microsoft GitHub at github.com /GPUOpen-Drivers/AMDVLK/releases. There is no git source tree to look at, AMD just dumps source tarballs and binary packages for Ubuntu and RedHat/Fedora once or twice a month and that's what you get. AMDVLK is built on AMD's cross-platform "Platform Abstraction Library (PAL)". It is basically a Linux version of the Windows driver, it is not at all the same as the free software community's Mesa RADV Vulkan driver.

The default (Vulkan at 4K High) Basemark GPU 1.2.1 benchmark crashes/hangs in the same spot with both the AMDVLK driver and the Mesa 2.20.0 rc4 RADV driver on Linux 5.9 rc4. That default benchmark does run, like a slide-show, without issues on Intel integrated graphics using the Mesa ANV driver.

The rather simple vkmark benchmark does work with both Mesa RADV and AMDVLK. A very quick and dirty test of the Mesa 20.2 rc4 RADV driver vs AMDVLK 2020.Q3.5 using vkmark --fullscreen at 1440p reveals that AMDVLK is slower and therefore totally not worth bothering with. The default free software Mesa RADV driver developed by the free software community using a live git tree everyone can see and participate in development of, is faster than the "open source" AMDVLK driver in the not very good or accurate vkmark Vulkan benchmark.

The vkmark scores do not mean all that much since the tests that benchmark runs are so ridiculously simple that they produce FPS numbers in the thousands on many-years old graphics cards. Still, a win is a win, and the Mesa RADV number does win with a whopping 100 FPS (which means a whole lot less when it's 3583 vs 3483 than it would mean if it was 150 vs 50 FPS).

The difference between AMDVLK and Mesa 20.2rc4 RADV is just 1 FPS in the MSI Kombustor Furkmark-MSI test rendered at 1080p using Vulkan. There is, however, something seriously wrong with the way AMDVLK handles the MSI Kombustor TessMark tests.

Someone from AMD should probably have a look at how AMDVLK 2020.Q3.5 handles the MSI Kombustor TessMark tests since there is a gigantic performance difference between AMDVLK and Mesa RADV that isn't there in the Furkmark-MSI and Furmark-Donut tests. The TessMark test are probably using some specific Vulkan feature AMDVLK is really bad at compared to Mesa RADV. Games using whatever Vulkan feature is the root cause of the horrible TessMark performance will likely suffer equally gigantic performance-penalties.

Fedora 32/33 users who want to try the special AMD AMDVLK Vulkan driver can acquire the technology with this fine command:

vulkaninfo from the vulkan-tools package will tell you that you have two Vulkan-capable graphics cards even if you only have one once this package is installed. A brute-force fix is disable the Mesa driver by renaming the ICD loader file as root:

Switching between Vulkan drivers can be done by renaming both the Mesa and the AMDVLK ICD files. To switch from AMDVLK to Mesa RADV:

To switch from Mesa RADV to AMDVLK:

You can check what Vulkan driver you are using with vulkaninfo |grep driver. It will tell you

Ubuntu users can get a .deb package from github.com /GPUOpen-Drivers/AMDVLK/releases.

Installing AMDVLK for performance reasons is probably not worth it if the vkmark numbers are any indication. But there may be compatibility reasons, if a Vulkan games has issues with the Mesa RADV drivers then the AMDVLK driver could be worth a try. It is closer to the Windows driver than the Mesa driver is so it may work better if some proprietary game has glitches or issues using the Mesa RADV driver.