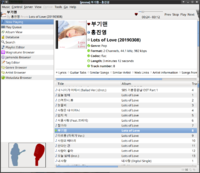 GMPC is one of many front-ends for controlling MPD

The Music Player Daemon is a really good music player which runs in the background as a system service. It can and must be controlled by a front-end program and there are many choices for both the console and X and desktops environments like Xfce, KDE and Gnome. There's also web-based software for controlling MPD.

MPD will scan your music collection and make it searchable. You can use a front-end like Cantata, GMPC and a ton of others to manage playlists, adjust volume, start and stop music and so on. MPD will happily keep on playing when the program used to control it is closed (unless you press stop first, obviously).

MPD does not need to be controlled by the same machine. You can have a PI or something with MPD running connected to a surround receiver and control music playback from a phone or laptop or computer. MPD itself requires close to no resources beyond storage. You will probably need a lot of attached storage.

MPD will only allow you to configure one "music directory" in your mpd.conf[1]. You can not have two. The obvious magic trick used by many to overcome this glaring limitation is to create the one "music folder" with symbolic links[2] to all kinds of other folders.

There are numerous good front-end programs which allow you to control MPD. Cantata and GMPC are the best graphical programs. There are several programs for controlling MPD from a terminal too.