Audacious is a really nice skinnable modular music player which supports all the audio formats and features like volume normalization, cross-fade and more. It is a basic one playlist-oriented player; it is not database-driven unless you enable a search-plugin. It's made with high audio quality in mind and it supports all the audio formats. Audacious 3.x is uses the GTK 2 toolkit, Audacious 4.x uses Qt 5 by default but can be compiled to use GTK 2. 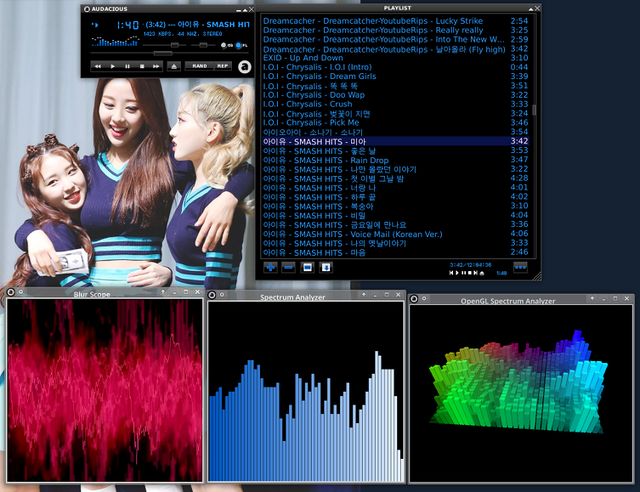 Audacious is a "classic" music player like XMMS and good old WinAmp. You can add files, folders and folder trees to a playlist and load and save playlist. It's a playlist-oriented player and a good one at that.

Audacious has three possible interfaces. Distributions tend to provide a Winamp-like interface, which looks exactly like good old Winamp, and a GTK interface. It is also possible to build a Qt5 interface.

There is no music database or music indexing unless you enable a plugin for it called "Search Tool". This tool can index a music collection do searches on it. The filtering capabilities are limited. Audacious is not made with this kind of use in mind; another audio player solution like Music Player Daemon+Cantata is better if a searchable music-database is what you're after. The "search tool" integrates into the GTK interface. It becomes a separate floating window when the winamp interface is used.

Audacious will play all audio formats and network streams you encounter just fine thanks to a versatile collection of "Input Plugins".

The Winamp mode is comfortable if you are used to this style of interface. It may not appeal to you if you are more familiar with phone-style "material interfaces".

The WinAmp mode has a bug which is triggered if you right-click the top of the winamp interface and turn it into a bar and use the system tray icon plugin. If you minimize the window by clicking the system tray icon after making the window a small horizontal bar it will re-appear either in the center of the screen or in a corner - not where it was previously - if you click the system tray icon to make Audacious re-appear. Audacious developer John Lindgren refuses to accept the reality that this is a bug in Audacious and proposes that users switch window manager to avoid this issue. One small problem with that laughable solution is that this bug affects every window manager we've tested. 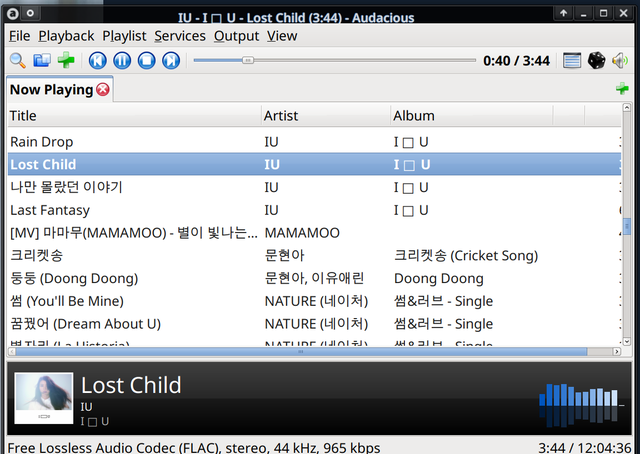 The GTK interface is totally fine. It is strait forward and easy to use. 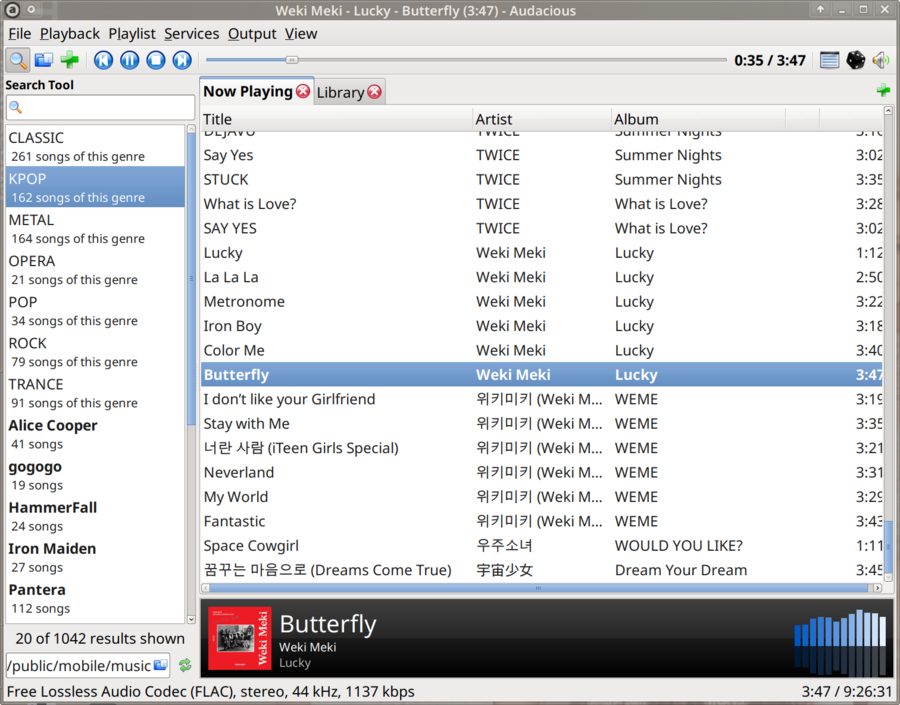 The "search tool" plugin can give Audacious basic music database management. Searches are limited to keyword searches matching everything; a search can not be limited to artist or title or album.

The GTK interface allows you to have several tabs with playlists open. It is not possible to play two songs at once, only one playlist can be used at a time. This feature is handy if you, for example, would like to make a k-pop playlist while listening to classic music. Audacious can only manage one playlist when the "winamp" interface is used.

Pressing ctrl-f in the GTK interface allows you to search for a song and then you're stuck at the first instance of the keyword you search for.

Audacious has another feature called "Jump to song", accessible by ctrl-j in the GTK interface, which opens a dialog which lists all the songs with the keyword you searched for. The same feature can be used in the winamp interface by just pressing j (ctrl-j brings up something else in winamp mode). 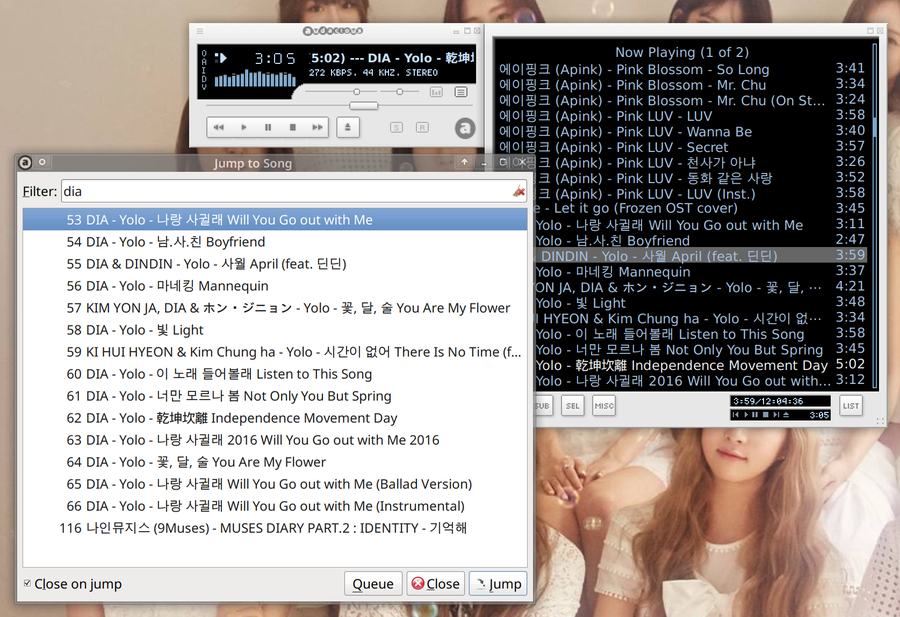 Using the "Jump to song" interface by pressing ctrl-j (gtk-mode) or j (winamp-mode) is a lot more flexible than ctrl-f.

Audacious is a modular program and is, as such, made with a collection of plugins. There are special input plugins for a variety of audio formats like sid, s3m, mod and many more formats. The ffmpeg input plugin the important one since that one will play everything.

Audacious is made with high audio quality in mind. It supports audio output to PulseAudio, ALSA, OSS3, QtMultimedia, SDL, Jack and a file-writer. There are numerous audio effect plugins to "enhance" your experience.

In practice it sounds like any other audio player. Perhaps people with Golden Ears can notice the "better audio quality" from Audacious. Perhaps it really does sound the same as any other player playing the same files. The mystery remains unsolved.

There are many audio effects available. Crossfade is probably the most useful effect. There is a Crystalizer and Dynamic Range Compressor and Silence Removal and many more if you are particularly interested.

Audacious comes with a command-line utility called audtool which will tell you all it's features if you run audtool help in a terminal. You can use this to start and stop playback, get information about the current song, manage playlists (add/remove/clear songs), set volume, change the equalizer and pretty much everything.

Audacious is a really nice player if you want a player with a playlist window you can drag files into from a file-manager (or add files or filter to with the + button). Audacious is probably the best stand-alone music player of this kind.'

It simply isn't viable if you on the other hand want a music player which keeps an index of a large music collection so you can search it by artists, genre, year, group. The built-in "Search Tool" plugin will let you make an index and search for a keyword (just keywords, not keyword filtered by anything). It can be used but it really doesn't compete with the combination of Music Player Daemon+Cantata or music player programs like Clementine which were made with database indexing and searching in mind.