Manjaro Linux will not be installing the proprietary FreeOffice by default

It appeared as if the popular Linux distribution Manjaro was going to include a free version of the non-free proprietary office suite FreeOffice crippleware from German SoftMaker Software GmbH instead of the free office suite LibreOffice in the upcoming 18.1 version of their operating system. This is now off the table due to massive push-back from a handful of vocal people. 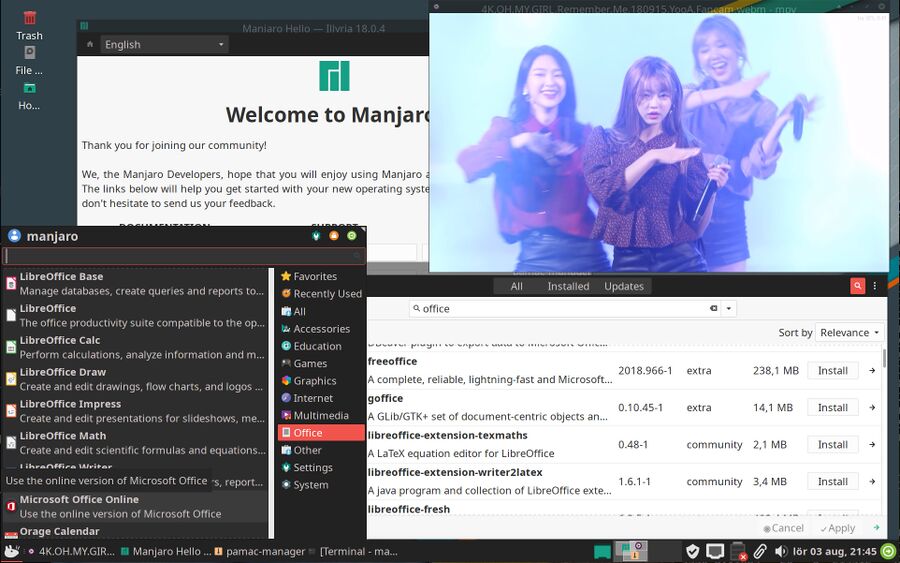 Manjaro Linux 18.0.4 with the default Office options shown in the menu and some of the optional Office suits that can be installed. Also, Yooa from Oh My Girl in the upper right corner. She's so gorgeous and talented, it's hard to get enough of her.

Manjaro Linux version 18.0.4 includes LibreOffice and some useless advertisement thing called "Microsoft Office Online" which shows two buttons labelled "Get Office" and "Sign in". Several release-candidates of Manjaro 18.10 came with the proprietary office suite FreeOffice instead of LibreOffice and "Microsoft Office Online". FreeOffice is, in fact, not free libre software. It is proprietary closed-source software from German SoftMaker Software GmbH.

The decision to axe LibreOffice in favor of FreeOffice was not well received by some members of the Manjaro community. The push-back made the developers announce that "This isn't happening" in a forum-post titled "About FreeOffice - it’s not being installed by default". Manjaro 18.10 will instead prompt the user to choose an office suite during installation or not ask and default to LibreOffice depending on which flavor is installed. (Manjaro comes in KDE, Xfce and foot flavours). The installer will have an option of choosing "No office suite" in addition to LibreOffice and FreeOffice.

Manjaro Linux is a rolling release distribution which means that existing users who update their system using the package manager never need to re-install. The installation images are versioned with numbers like 18.0.4, 18.10 and so on. There is no fixed date for when the installation images will be tagged final 18.10. It will probably happen in the near future given that the current installation ISOs are tagged 18.10rc6 and rc7 will be released "soon". The current up-to-date version of Manjaro Linux features Xfce 4.14pre3, LibreOffice 6.1.6.3 and GIMP 2.10.12 - and a lot of other software, including proprietary software like Steam. Honorary Doctor Richard Stallman, father of the free software movement, would not approve of this distribution. Non-technical people may find the inclusion of proprietary Nvidia graphics drivers and Steam to be a huge advantage even though it is highly immoral. This is a very personal choice.

Manjaro Linux can be acquired from manjaro.org.