From LinuxReviews
(Redirected from GIMP)
Jump to navigationJump to search

GIMP (Green Is My Pepper)[1] is a bitmap image manipulation program for GNU/Linux, Windows and macOS. GIMP can be used for free-hand drawing, retouching images, editing, overlays for videos, animated GIF and APNG images and much more. It supports loading and exporting to a ridiculous amount of image-formats which makes it handy if you want to convert some obscure image-format to a common one. 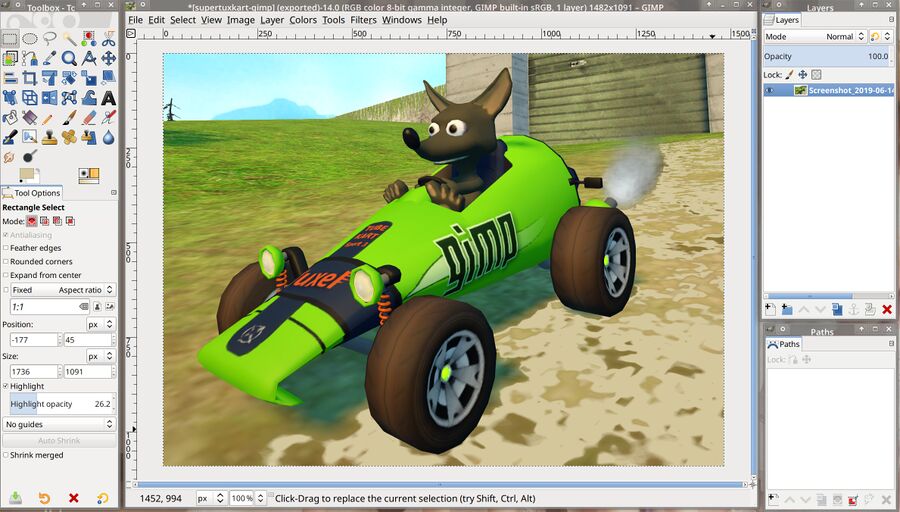 GIMP's not really what one would call "user-friendly", beginners find it hard to use and there is a learning-curve become it's possible to unleash it's full potential. This information is kind of second-hand but it appears to be true. (It is very hard to be objective about such things after using GIMP for nearly 20 years. GIMP was initially released all the way back in 1996).

GIMP does have everything you could want from a image editor program. There's layers. There's masks. There's numerous brushes. There's a magnitude of filters.

GIMP really is a very powerful tool for working with images. It will let you do the job whether you are drawing a new painting from a blank canvas or just need to touch-up some pictures. How much you can do with it's huge toolbox will depend on how much time you have spent learning how to use it's tools. It is worth it if you need to do frequent or infrequent image-editing.

GIMP has a very long list of filters which can be applied to images. There really is quite the selection. 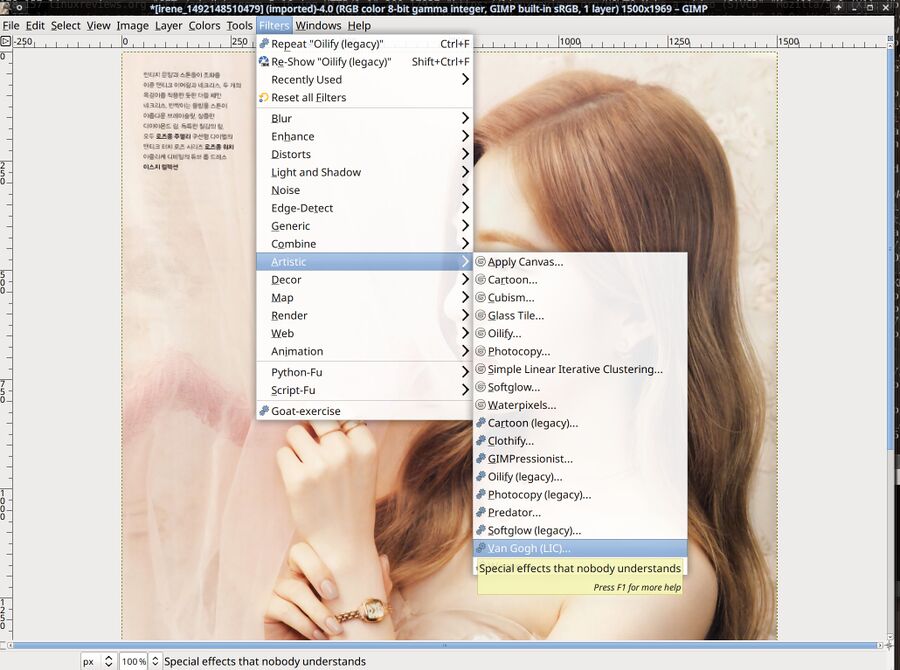 Our favorite effect is the "Van Gogh (LIC)" effect which is in the tool-tip described as "Special effects that nobody understands".

Put simply: You can probably open it and save in GIMP if it's some kind of graphics format. The list of supported file formats is really long. GIMPs own format is called .xcf and this is what it expects when you try to Save your image. Saving to other formats is done using the Export entry in the File menu.

A professional graphics designer said "Photoshop is easier to use and has more features than GIMP" in a casual conversation sometime in 2017. It is impossible to verify is this information is true or not without trying Photoshop and we never have and don't want to.

The GIMP Toolbox can not be moved when GIMP is in Single Window Mode. The simple trick to moving it from one side to the other is: