Linux Mint is a GNU/Linux distribution most notable for its distinct green and black branding. It it based on Ubuntu Linux LTS releases with the latest (as of early 2020) Linux Mint 19.3 release based on Ubuntu 18.04. It is available as live ISO images with either Cinnamon, MATE or Xfce. Linux Mint adds its own branding, some custom configuration files and newer versions of Cinnamon and MATE to its Ubuntu LTS variant. The differences beyond that are minor.

We tested Linux Mint 19.3 Cinnamon Edition for the purpose of this review. The MATE and Xfce desktop editions have the same Ubuntu-based system under the hood but the default desktop environment will obviously look and behave differently. 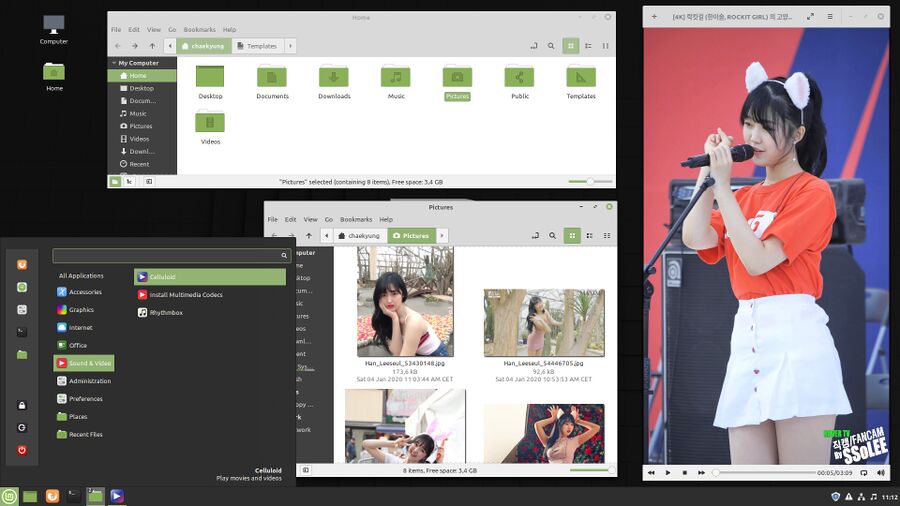 Linux Mint is Ubuntu Linux LTS with its own package repository, custom out-of-the-box configuration, custom themes and either the Linux Mint developed desktop environments Cinnamon and MATE desktop or the Xfce desktop environment. Its also got a few unique software packages that are developed by the Linux Mint team. They have a GitHub page listing them at github.com/linuxmint. Their own Xreader document viewer and their image viewer Xviewer are set as defaults. Linux Mint's Xfce variant is essentially just Ubuntu with Xfce installed and used by default with a custom theme. 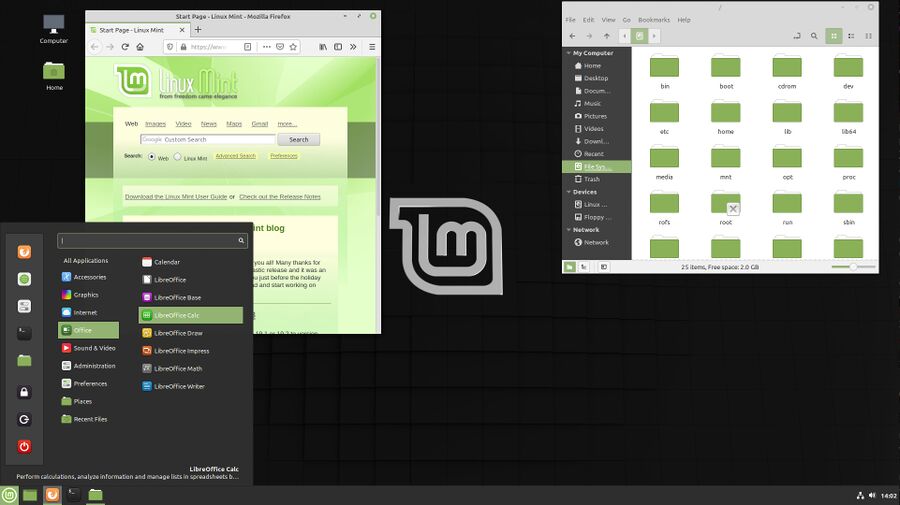 Linux Mint boots into a fully working desktop environment with a handy "Install Linux Mint" icon. Clicking it starts the installer which asks what language to use during the installation. It then asks for a keyboard layout. The installers next question is worth some consideration: 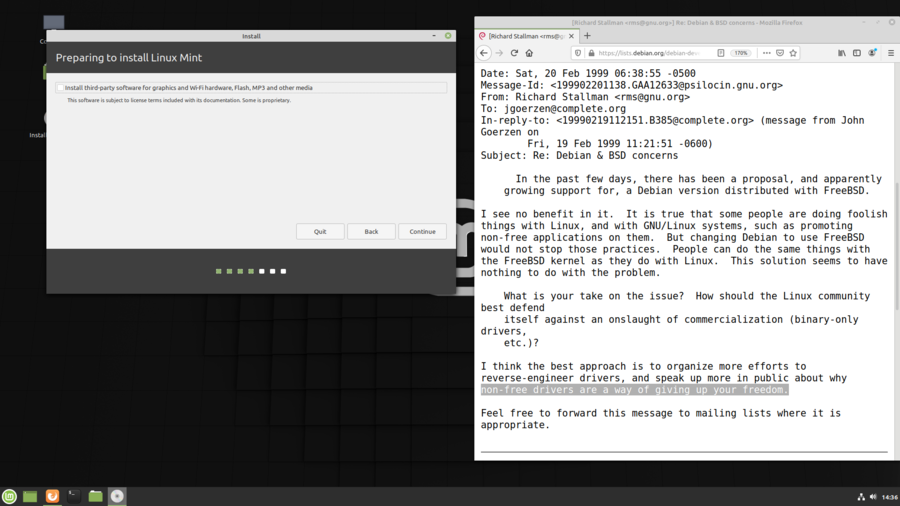 Linux mind will offer to trade freedom for convenience during its installation.

"[ ] Install third-party software for graphics and Wi-Fi hardware, Flash, MP3 and other media. This software is subject to license terms incldued with its documentation. Some is proprietary."

MP3 patents expired long ago, that part is probably a left-over from the time the outdated MP3 codec was subject to patents. Non-free software is not required to play MP3 or the more modern Opus format which replaced it as decade ago for that matter. The "third-party software for graphics" would be the binary blob driver for Nvidias graphics cards. Nvidia has placed restrictions on their firmware which prevents the free driver from performing acceptably. Owners who are unfortunate to have Nvidia hardware may want to check that box. However, it is important to beware that: 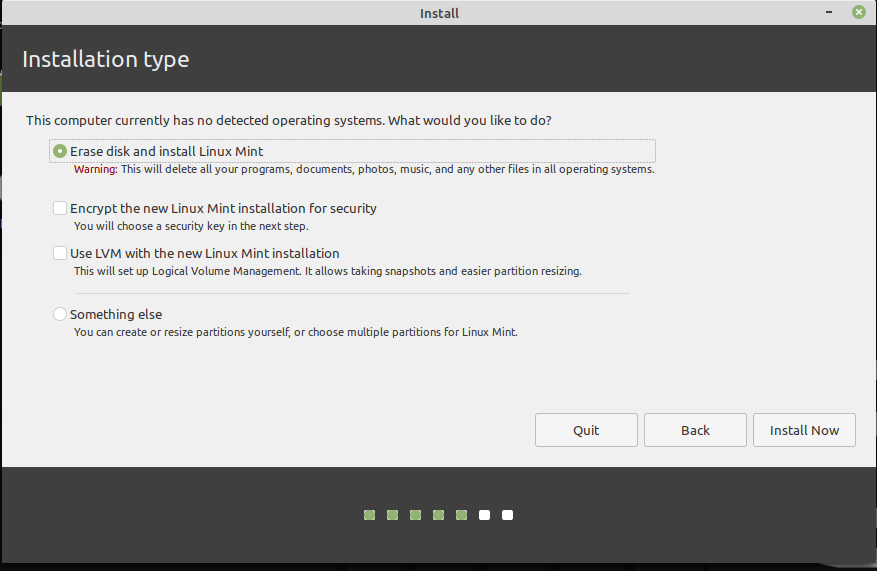 Next step is to set your timezone. It will then ask you to enter a username and a password. There is an option to enable [ ] Encrypt my home folder in this step. That is a nice touch, you can enable full disk encryption and share that password with your family and still have your personal files private if a family member is compromised. 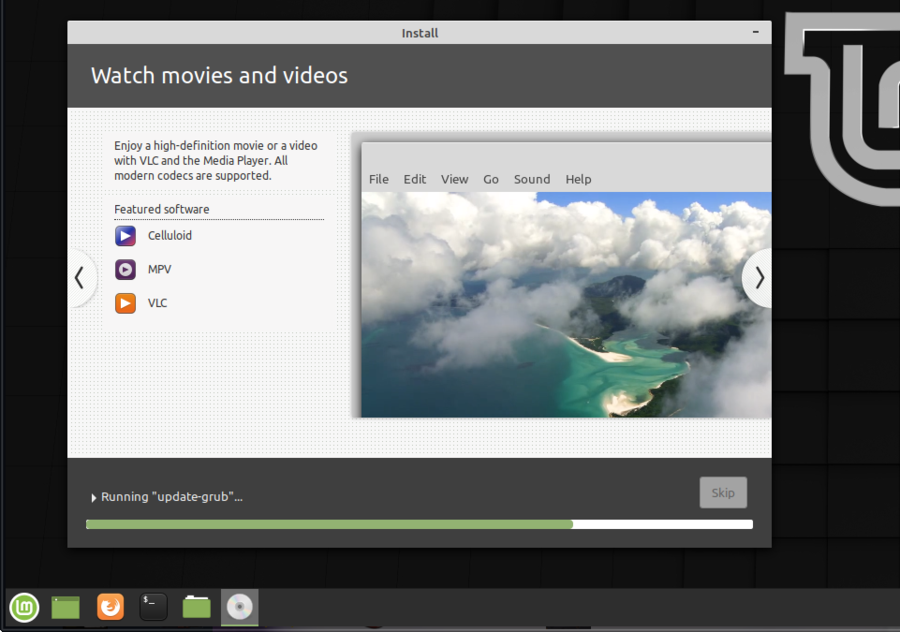 There are no more questions once a username and password is provided. Linux Mint will start its installation process which is quickly done if the installation target is a SSD. It will take some time if you install to a HDD. Doing so is not recommended. SSDs have become so cheap as of 2020 it's simply ridiculous to run a operating systems off a HDD. 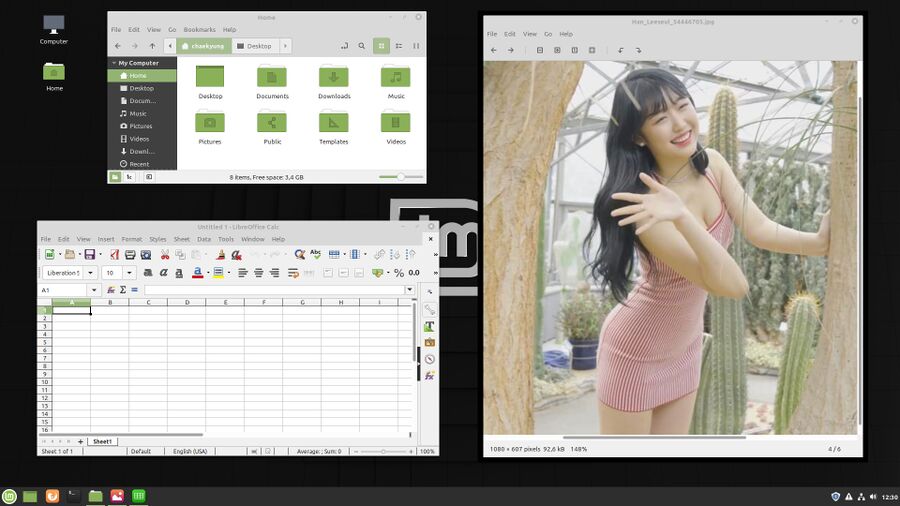 The default Cinnamon desktop on Linux Mint 19.3 with the default file manager nemo, LibreOffice and the "Xviewer" image viewer showing a picture of Han Leeseul from Rockit Girl.

Linux Mint launched into a very polished yet dull-looking traditional desktop with a panel on the bottom and icons on the desktop. The wallpaper is black with a gray M logo on it. The window titlebars and most of the default theme consists of a dull gray color with some white and green. The icons are single-colored

The default panel has a notification area in the lower right corner which supports regular freedesktop standard compliant icons. It is by default populated with a clock, volume control, a network connectivity tool and a system update tool. Applications like qBittorrent and Redshift (for changing color temperature depending on the time of day) work as expected; their icons are placed next to the existing ones in the lower right corner. Oddly, Linux Mints SMPlayer appears to be compiled without system tray support.

The default Cinnamon desktop does not have any virtual desktops configured. Virtual desktops are supported, they are just not enabled by default. New "Applets" can be added to the panel, getting a virtual desktop switcher (which can be used to add virtual desktops) is a matter of right-clicking the panel and choosing Applets and adding Workspace switcher.

The window manager has all the features modern window managers have but they are not all that readily available. Windows can be set to be "Always on top" and set to be visible on all workspaces by right-clicking on the title bar. There are on title bar icons to make windows sticky (on all workspaces), roll up windows or place them always on top; the only icons that are there are minimize, maximize and close.

The severe lack of window manager configuration options in Linux Mint Cinnamon edition is disturbing. The wallpaper in this screenshot is not a Linux Mint default.

Linux Mint comes with a window manager configuration utility called Windows. The Windows configuration utility has a setting called Button layout with the options of placing the three default buttons on either the left or the right side. There is no way to add more buttons or re-arranging their order. The Windows configuration dialog can be used to specify an action which makes windows shaded - and that is the only way to enable that functionality. The rest of its options cover the basic choices, focus can be set to follow the mouse or require clicking on applications to focus, window focus stealing can be prevented and new windows can be set to either open in the center of the screen or be placed "automatic". alt+Tab ↹ behavior can be customized and there are several 3D effects available.

The versions of the software Linux Mint installs by default stands out as being grossly outdated. Firefox is up-to-date with 71 being the both the latest version and the current version in Mint. LibreOffice is at version 6.0.7.3. 6.3 is the latest stable version and 6.4 rc1 is released and the final 6.4 release is close. The video player Celluloid is at v0.17 not 0.18.

Linux Mint is based on Ubuntu's Long-Term-Support (LTS) releases so some lag behind current releases is to expected late in its life-cycle since software like LibreOffice is typically not updated to new major versions during LTS distributions lifespans. Linux Mint users are therefore designated to be stuck with an ancient version of LibreOffice.

A massive amount of other programs can be installed using one of two by default install application managers. Linux Mint comes with the Synaptic Package Manager, which it uses to update software, and a much prettier program titled "Software Manager" (actually named mintinstall) in its menu. The "Software Manager" has recommendations on the front page and categories which makes it easy to browse software for various purposes. Individual software packages have a detailed description and, in most cases, a screenshot and several reviews. The reviews appear to be sorted by date and only the last ten are shown.

The "Software Manager" lists software from both Ubuntu's and Linux Mint's repositories and software packaged using FlatPak from FlatHub. The result is that some programs, like GIMP are shown twice with no indication of which listing is from where or what version would be installed. Other programs do have some indication. SuperTuxKart is listed as "SuperTuxKart" and "SuperTuxKart (flathub)". The Linux Mint version is 0.9.3. That version is very old and it doesn't even support Internet multi-play. The Flathub version offered is v1.0 - which is the latest version as I write this but v1.1 is probably released by the time you read this:

The software in Linux Mint's own catalog is generally old and somewhat outdated. Those who want newer versions will have to use packages from flathub - if they exists.

Linux Mint uses systemd for service-management. A brief look at systemd-analyze blame reveals that it starts a lot of system services most people do not need by default. This is in some ways good because people have different computers and different needs. It also means that you will want to look at the services it starts manually disable a some of them. ModemManager and pppd-dns are useful if you have a modem and it is nice that janitors on museums who work with computers from the 1990s can have their modem hardware work by default. Users of modern machines do not need to have those services running.

Linux Mint does not ask you to set a root password during installation. It encourages the use of sudo - something the default regular user is allowed to do. Getting a root shell is a simple matter of running sudo -i and typing your regular user password. From there it's a simple matter of typing passwd to set a root password which can later be used to su. Membership in the sudo group is required to use the sudo command (defined in /etc/sudoers).

The AppArmor security framework (similar to SELinux) is present and enabled.' 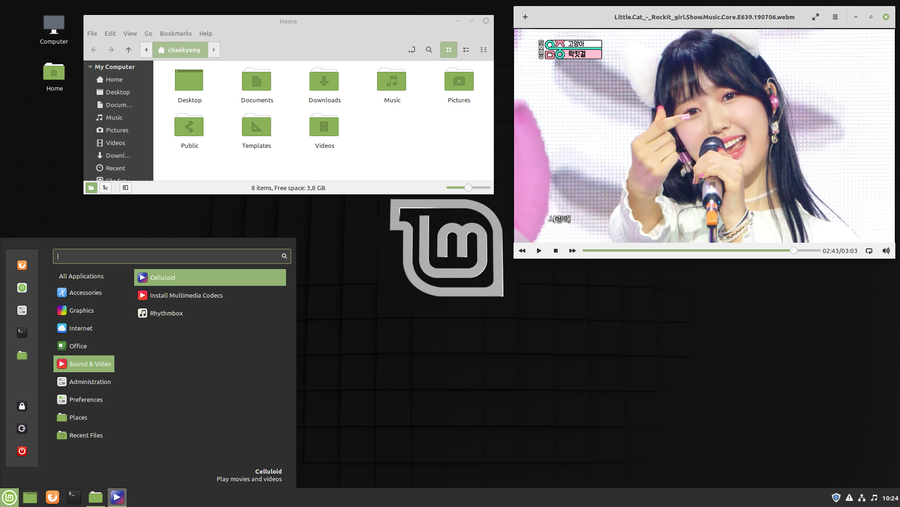 Linux Mint Cinnamon Edition is overall a easy to use distribution with a sane set of default but somewhat old versioned applications. The default desktop is alright though the default theme is kind of dull and uninteresting with its overuse of gray and monotome icons.

It is fairly easy to install and it offers two layers of encryption for security.

Linux Mint Cinnamon Edition is an alright choice and a nice choice for those who want to try Linux for the first time. Power users who want to use multiple workspaces and have a button for making windows stick to all workspaces in the titlebar will and features like that will have to look at the Xfce edition or another distribution like Manjaro Linux. 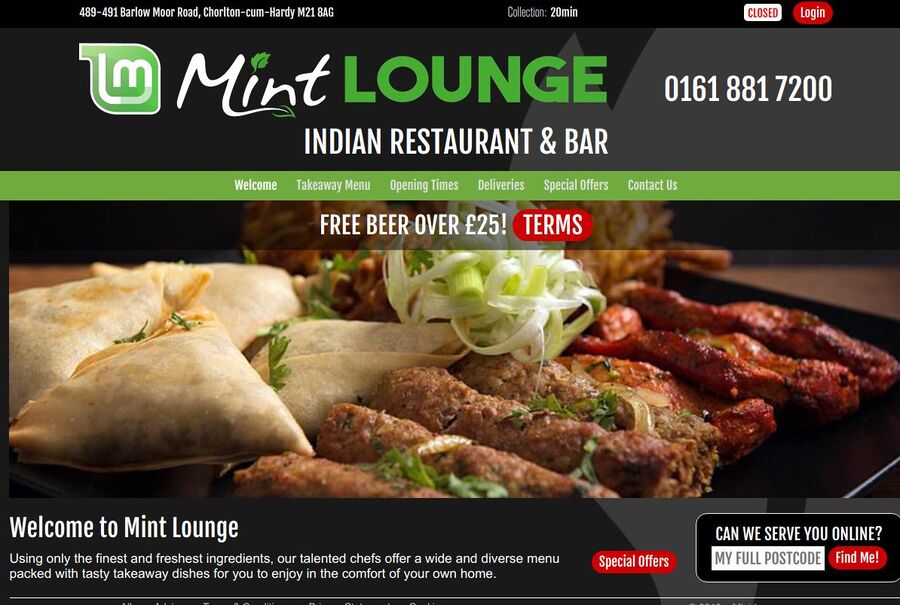 An Indian "Resturant & Bar" with "finest and freshest" ingredients decided to use Linux Mints logo back in July 2019.