LibreOffice is the most comprehensive and complete free software office suite available. It includes a word processor called Writer, a spreadsheet program called Calc, a presentation program named Impress and a vector graphics editor called Draw. There is also an application for creating and using mathematical formulas called Math and a database program called Base. 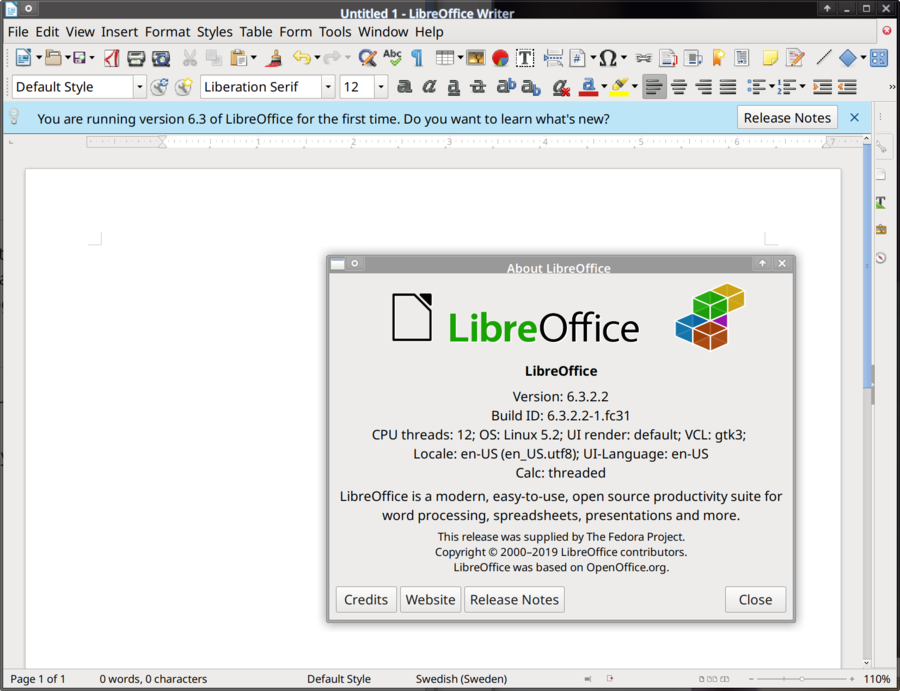 LibreOffice is a mature and fully featured free software office suite. It has all the features required to write documents, make spreadsheets, presentations, drawings and databases. It is somewhat different from office suites like Microsoft Office. Most people will find that LibreOffice can do everything they would like to do in an office suite.

LibreOffice begun its life as StarOffice all the way back in 1985. It was originally created by German Star Division. That company was bought by Sun Microsystems in 1999. They bought it for internal use with no plans to release any commercial product. They open-sourced it under the name OpenOffice in July 2000. OpenOffice version 1.0 was released May 1st, 2002. Sun Microsystems was, in turn, bought by Oracle Corporation in 2010. Most of the developers working on OpenOffice were immediately unhappy with the way Oracle wanted to handle OpenOffice. They abandoned ship, formed The Document Foundation and announced LibreOffice as an alternative fork in September 2010. LibreOffice quickly replaced OpenOffice as the most dominant and most active fork. Oracle abandoned their OpenOffice fork in Juny 2011 and donated the trademark and the Oracle-owned code to the Apache foundation. The "Apache OpenOffice project" is just barely still alive while LibreOffice is thriving.

LibreOffice is available for GNU/Linux and all the distributions have it available in the default repositories. It is also available for FreeBSD, NetBSD, OpenBSD, Mac OS and Windows.

GNU/Linux users should install it using the regular repositories. Users of other operating systems can get it from it's homepage libreoffice.org.