The Norwegian Consumer Protection Agency "Forbrukerrådet" has spent millions of Norwegian government oil and tax money on a study which finds that the online advertising industry is "OUT OF CONTROL". The study focused on well-known smartphone applications. All of the apps examined were found to be collecting and sharing data in direct violation of European law. 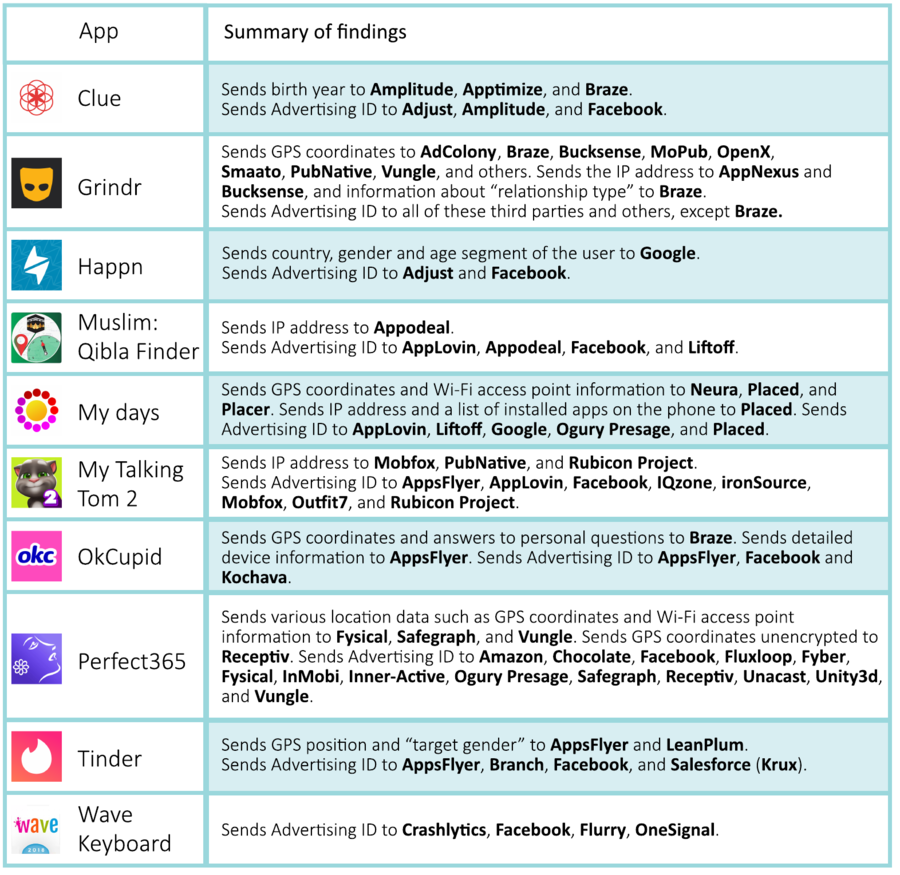 The mobile applications the Norwegians focused on in their AdTech study.

The 186 page long "Forbrukerrådet" report focuses on how ten "popular" smartphone applications collect personal information which is shared with surveillance giants like Facebook, Google and Twitter without content. The apps they examined were Clue, Grindr, Happn, Muslim: Qibla Finder, My days, My Talking Tom 2, OkCupid, Perfect365, Tinder and Wave Keyboard.

"The technical tests revealed a number of serious privacy infringements. Some of the key findings are summarized below:

The dating application Grindr and the makeup application Perfect365 were found to be the worst offenders.

"appears to be illegal under the General Data Protection Regulation."

They further note that

"these practices are out of control, rife with privacy violations and breaches of European law, and highly problematic from an ethical perspective."

"Some of the harm of this data exploitation stems from significant knowledge and power asymmetries that render consumers powerless. The overarching lack of transparency of the system makes consumers vulnerable to manipulation, particularly when unknown companies know almost everything about the individual consumer. However, even if regular consumers had comprehensive knowledge of the technologies and systems driving the adtech industry, there would still be very limited ways to stop or control the data exploitation.

Since the number and complexity of actors involved in digital marketing is staggering, consumers have no meaningful ways to resist or otherwise protect themselves from the effects of profiling. These effects include different forms of discrimination and exclusion, data being used for new and unknowable purposes, widespread fraud, and the chilling effects of massive commercial surveillance systems."

The Norwegians appear to believe that resistance is futile. They are wrong. Resistance is, in fact, not futile. You can resist.

The Norwegians chose to focus on mobile applications so we will cover that first. There is an alternative free software-only app store for Android called F-Droid. Closed source applications, applications with spyware or tracking are not allowed into the F-Droid app store. They do allow some applications that rely on third party services. Such applications are clearly marked as having "anti-features" and its settings can be configured to hide such applications from the app store'ss catalog. 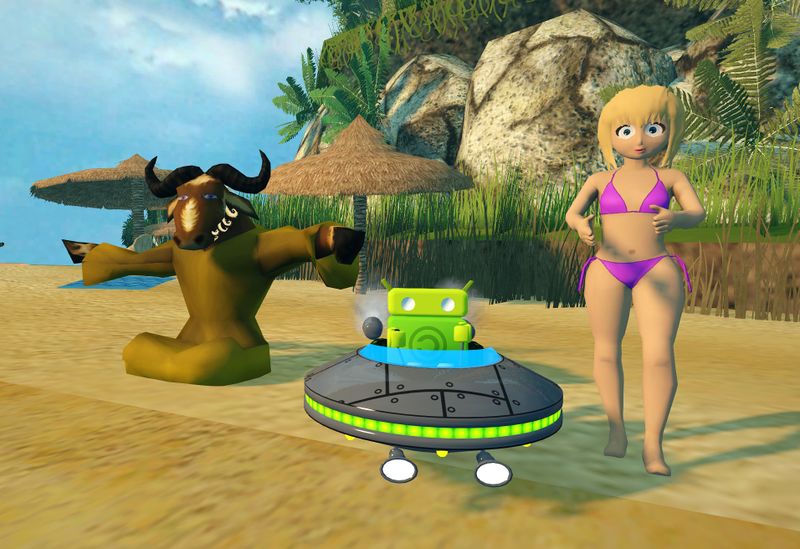 You will not find any of the specific applications the Norwegians studied in their report in the F-Droid application store but you will find privacy-respecting free software alternatives to most of them.

Privacy Browser is one of many excellent privacy-focused applications available in the F-Droids catalog. It filters trackers and advertisements out from web pages. It uses many of the same filter lists the desktop browser filter Ublock Origin (which you should install if you use Chromium, Firefox or Pale Moon on your laptop or desktop) takes advantage of.

There are many alternatives to the "Wave Keyboard" application the Norwegian tested in the F-Droid catalog. AnySoftKeyboard is one alternative which works well. It supports most languages through optional language packs.

The tracker-riddled "My Days" and "Period Tracker Clue" applications can be replaced with either a number of privacy-respecting calendar programs in the F-Droid application store or the specialized Periodical period calendar.

There do not appear to be any alternatives for Grindr, happn, OkCupid or Tinder in the F-Droid catalog. This does not mean you can't resist tracking if you are forever alone, you can turn off your phone and go outside. There are many single people out there in the real world.

There is also no free software alternative to the Perfect365 makeover application. Women got makeover advice from other women for centuries before the advent of smartphones. You could ask a friend for tips if you are in a dire need of makeover advice.

"Apps" Are Not The Only Problem

Web pages such as this one have advertisements on them. Those advertisements are typically served by third parties who do tracking. Using a web browser that protects you against such tracking is as important to privacy as avoiding apps with tracking. The Android Privacy Browser is a good web browser choice for mobile users. Desktop users can install the Ublock Origin web filter extension. It can be used with most major browsers including Chrome, Chromium, Edge, Mozilla Firefox and Pale Moon.

The vast majority of our readers are stealing our precious content by using some kind of advertisement filter. You can join them by installing Ublock Origin.

You may wonder why this site has advertisements served by a gigantic surveillance corporation. The simple truth is that our users have donated a generous $3 worth of BAT cryptocurrency and $4 through Flattr since this site's inception in 2004 and that's it, that's all the donations we have received - ever. Running this site off $0.44/year is obviously not possible.

"Digital content is to a large degree funded by advertising, which means that rather than paying for services with money, companies monetize our behaviour, attention and personal data. In order to maximize the potential revenue for advertisers, online advertising is becoming increasingly individualized and tailored to specific groups or individuals. Most of us carry our smartphones around at all times, which has opened up new possibilities for marketers to grab our attention and influence how we act at any moment. In order to create and serve accurate and relevant advertising and create personalized digital environments, this individualization depends on knowing as much about each one of us as possible."

The advertisements present on this site will be removed if visitor donations match the revenue currently generated by the advertisements shown to the very few readers who do not block them. It is unlikely that our readers will magically start donating enough to make it a sustainable alternative to advertisement revenue - which is why the vast majority of websites out there have even more advertisements than we do.

Some Last Words Of Advice

"the massive commercial surveillance going on throughout the adtech industry is systematically at odds with our fundamental rights and freedoms."

The free software F-Droid app-store has an increasing amount of privacy-respecting applications covering a wide range of areas. It can be installed by going to f-droid.org where there is a big "download" button on the front page. You may have to change your device's settings so it allows "third party software" to be installed before you click that button.

As for the non-free (yet free as in zero price in most cases) apps in Googles "Play" store: You should assume that all of them are tracking you and sharing that data with third parties. If it is online and free of charge then it is likely that you are the "product" being sold to advertisers and data-mining companies. Free software like the software available in the F-Droid app-store at f-droid.org is one of the very few exceptions.