Google Is Cracking Down On Fediverse Applications For Android

Google has issued warnings to the creators of the free software Android applications Husky (F-Droid), Fedilab (F-Droid) and SubwayTooter (GitHub) demanding that they address supposed "violations" of the Google Play Store rules and regulations. Google objects to how the applications, used to connect to social media sites running free federated social media server software such as Mastodon, Pleroma and Soapbox, allow users access to user-generated content that "incites discrimination". 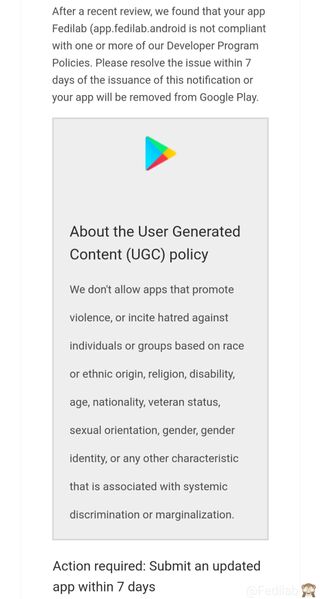 There are thousands of fediverse servers running software the apps in question can connect to, just like there are millions of websites users can connect to and see all sorts of things on the Internet. Google does not appear to have any problem with their Google Chrome web browser product being in their precious Google Play Store even though it can be used to access all the social media sites the apps they object to can connect to and a whole lot more.

There is, of course, no way any individual Android app creator can police the entire Internet. What is and is not allowed on the individual social media sites that make up the fediverse is up to the people running those sites, the authors the client applications used to connect to those sites have no say in the rules and policies on those sites. That leaves the app-creators with a dilemma: They simply can't comply with Googles rules without seriously crippling their applications.

Shipping the fediverse apps with a ever-increasing blacklist is one alternative. Shipping them with a whitelist of "good" well-moderated instances is another. Both alternatives would severely limit what end-users can do with the software. Google is, in a sense, demanding that free software authors turn their apps into crippled proprietary software.

The authors of the Fedilab application are considering a interesting and rather drastic solution: They could place a login-block on the Google Play Store version and tell users to get a working one from the alternative free software-only F-Droid app-store. That "solution" may be slightly better than not having Fedilab in the Google Play Store at all but it sure isn't a very good or user-friendly solution.

Having a broken Android application in the Google Play Store that tells users to install it from elsewhere is possible because Android is not as locked down as the Apple iOS operating system is. Android users can easily install alternative app-stores like F-Droid and get their free software from there. The world will go on if/when Husky (F-Droid), Fedilab (F-Droid) and SubwayTooter (GitHub) are kicked out of the Google Play Store. But it is, nevertheless, a bad development because F-Droid, and app-stores like it, hold a very tiny share of the overall app-store market. Most less tech-interested people are not even aware that alternatives do exist. The Google Play Store has a near-monopoly in the Android app-store market thanks to it being pre-loaded on every Android device. And it sets a bad precedent: "user-generated content" can mean anything and it is what a broad range of Internet content consists of. Google can kick almost anything out of their app-store with that excuse.

App developers, specially those who make free software applications and give them away for free, will not be able to change Google's App Store policies. Those policies will likely get stricter and stricter unless some large government body like the European Union intervenes. That is actually not as unlikely as it may sound. The Google Chrome web browsers can be used to visit the exact same sites and the exact same "user-generated content" the apps they object to are used for. It is not unreasonable to ask if Google is using a near-monopoly in one market to promote their own web browser product in another.