The Fediverse is loose network of social network servers that act together to form a federated social network platform similar to centralized social network platforms like Twitter and Parler. Fediverse servers use the open ActivityPub standard to share content users on individual servers between the servers in the network. A variety of software such as Mastodon and Pleroma can be used to run Fediverse servers. Individual servers have widely different communities, policies and features. Some have draconian censorship-policies and others have a clear pro free speech stance.

A proposed Fediverse logo illustrating how individual servers are supposed to form a global social network. This is, in reality, not how it works.

The "Fediverse" is a network of social media style services who are, in theory, capable to interacting with each other. Services using Mastodon, Pleroma and other compatible social media software have a global "Federeated" timeline in addition to a "local" timeline as one of the core features. The "global" timeline shows all posts from all the servers the local instance is interacting with which is typically not all the servers in the network. The front page of servers running Mastodon software will, as a default, falsely advertise:

"With an account on $servername you'll be able to follow people on any Mastodon server and beyond."

A scarily large majority of the fediverse servers do not only censor local users, they also censor entire servers for reasons that are, in many cases, quite strange. A server which has blacklisted another server will not just omit the posts from the blacklisted server in the Federeated timeline, a blacklist entry will also prevent users from following users on the blacklisted server. That is kind of silly from a practical perspective. A user on a server which has blacklisted another server can go to that servers web page and see all the posts but can't subscribe to the users there even though all the data is publicly available.

How many servers a fediverse instance is blocking and why those servers are blocked is in most cases not clearly stated anywhere. It is therefore hard to know if people using other servers will be able to follow you and see posts you make on the server you are using.

Some servers censorship that is harsher and broader than competing platforms like Twitter and Parler. Other fediverse servers draw the line where the law draws the line. This means that users have a variety of options; those who like censorship can have it and those who prefer free speech can pick a free speech oriented server. Those who choose a free speech server will mostly be able to interact with censorship-riddled servers though that is not always the case: Some servers do blacklist a wide range of other servers. Servers with strict local censorship will generally have more restrictions on what servers they interact with. Servers that have a free speech policy can mostly be used to interact with any and all other servers. Choose wisely. 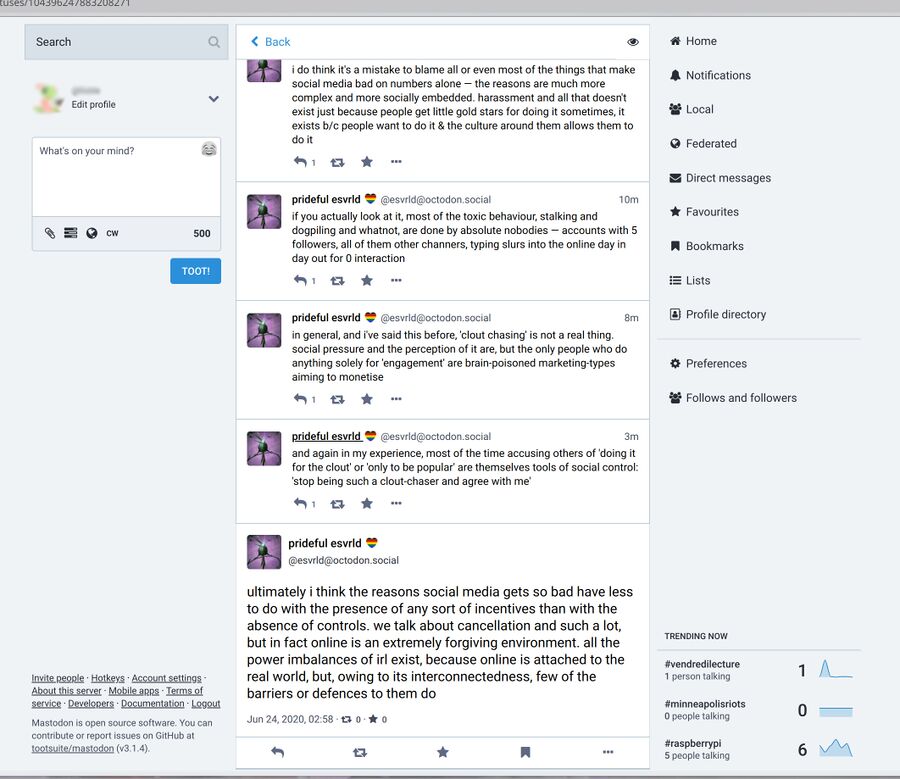 Fediverse servers communicate using a protocol called ActivityPub. A variety of software supports this protocol. Mastodon, Pleroma and GNU Social are the most common server back-ends. There are, additionally, alternative front-end software such as SoapBox that can on top of those back-ends. 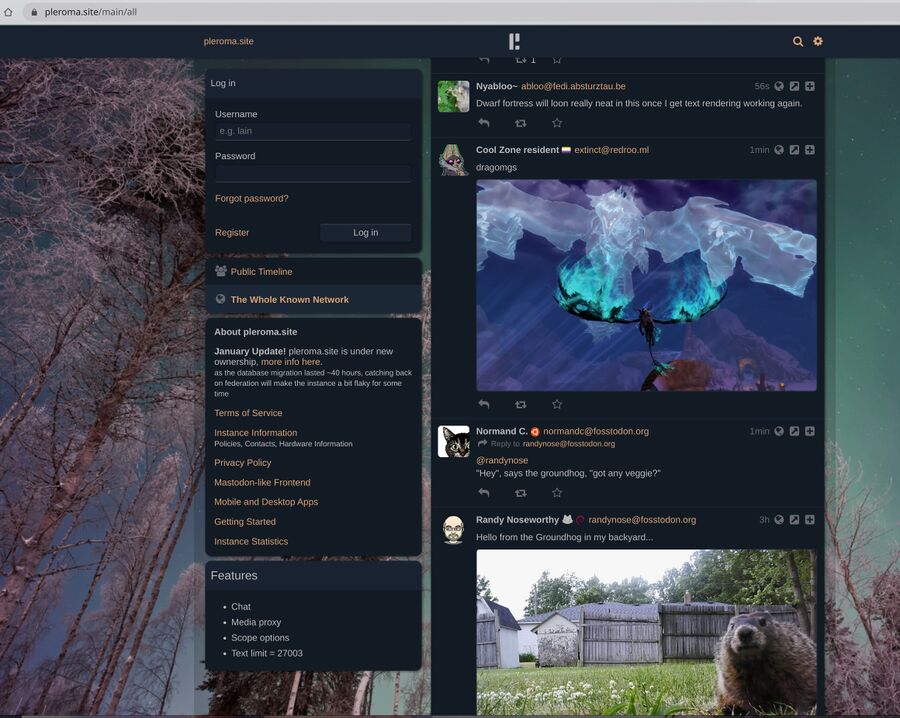 Twitter, Parler and Gab are isolated social networks that are run and controlled by a single corporation. The corporate masters who run those servers have different goals and policies in mind. The policies and rules may differ but their power structure is the same: A for-profit corporation controls the entire platform.

The fediverse is made up of thousands of servers that are maintained and administered by a diverse mix of individuals, organizations and corporations with widely different goals. There is no single entity who can dictate rules or policy for the entire network. You can even start your own server and participate in the fediverse if none of the existing servers suit your needs. This makes the fediverse more like the Internet was meant to be and should be; the Internet was not meant to be centralized and it was not meant to be in control of a handful of large corporations.

The "censored" servers are censoring more than posts on their own platform, they are also censoring everything posted on other servers in in realty not very interconnected "fediverse". Some, like todon.nl, have administrators who go out of their way to dox and research people's private life and ban people for having some post in some old blog or something.

Fedilab is a good choice if you are looking for a Android application to use with fediverse servers running Mastodon or Pleroma.

Fedilab does cost money in the Google Play store. It is available for free in the free software F-Droid app-store: https://f-droid.org/en/packages/fr.gouv.etalab.mastodon/

The developers of the mobile software Tootdon decided to shut it down in July 2019 when they realized that a large amount of users were using this application to by-pass the built-in censorship in other mobile Masterdon client applications.

Non-censored fork of Tusky. This is what you want if you are considering using Tusky. Available in the F-Droid store.

The mobile phone application Tusky for accessing the Mastodon network has censorship built into the application. Some ActivityPub-compatible instances can simply not be used by the Tusky mobile application due to it's built-in blacklist. 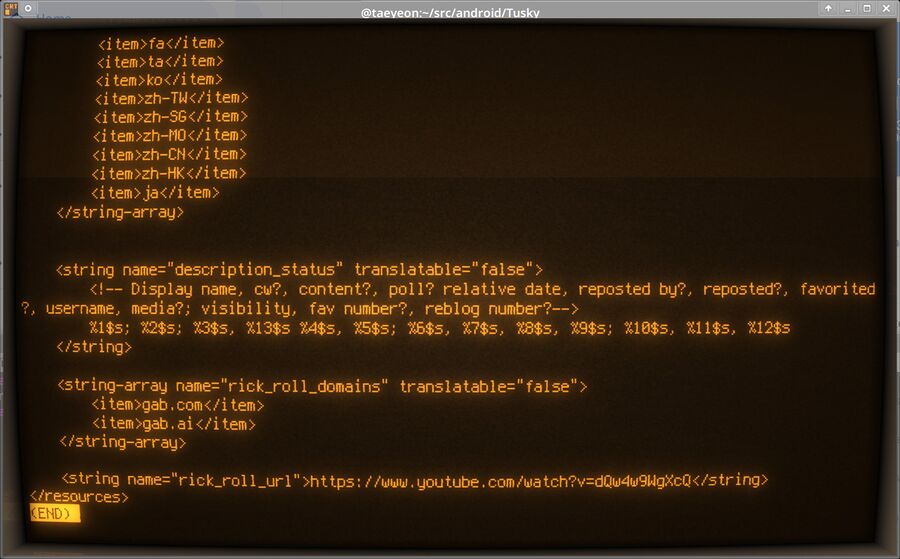 Tusky's "Community Manger" Marie Axelsson claimed that "This is not censorship, but rather a choice by this house who will facilitate our service to" in a commit June 2019. 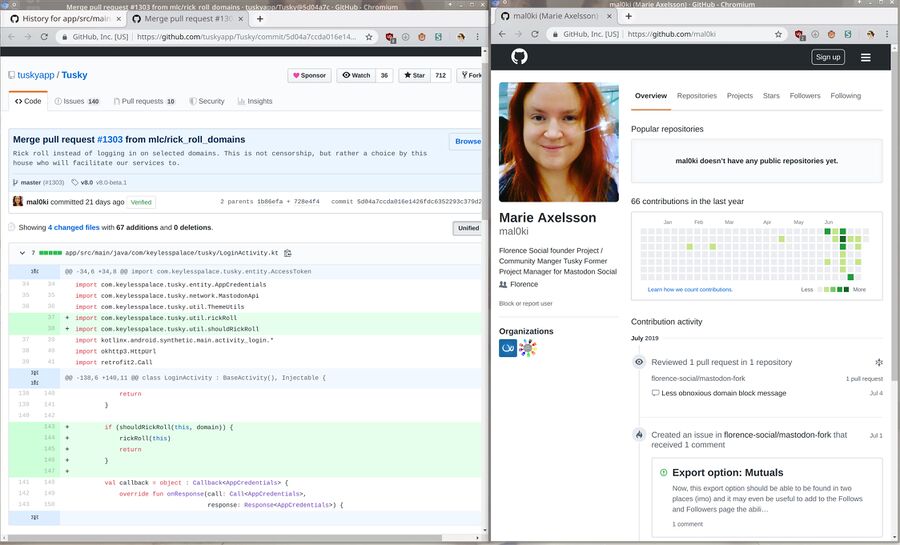 A built-in blacklist is of course censorship. Someone trying to decide what you can and can't see and read for you is the very definition of censorship. It is also worth considering if an app is the service it's users are interested in or if it's like a web browser used to access services on the Internet. Other comparisons to web browsers are worth thinking about: There are currently no web browsers who will go "you can't have that domain because we don't like the opinions shared on that one". And that's a good thing.