The Brave Browser will submit your IP to a geo-location service and record what country, and state if you are in the US, you are in if you enable the Brave Rewards "feature". There's also a completely new synchronization code for synchronizing bookmarks, logins and other data between Brave browsers running on different devices and a new 25 BAT minimum limit for withdrawing the already locked to Braves ecosystem Brave Rewards BAT currency tokens. The built-in advertisement blocker is also "improved".

Brave Browser 1.12.112 uses the standard Chromium synchronization engine with a custom Brave user-interface instead of the old Brave-specific "sync v1" functionality previous versions had. Synchronizing Brave browser instances on desktops and laptops is now done by cutting and then pasting a very long "Sync Code" consisting of 24 random words into a I have a Sync Code box on the other device. Mobile phones can be added as trusted devices to be synchronized by scanning a QR-code. 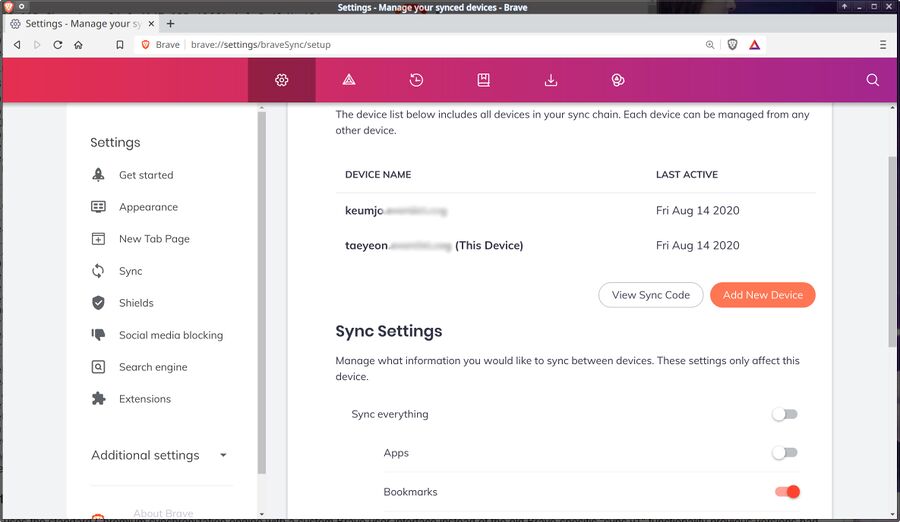 The new synchronization settings in Brave 1.12.112.

The re-vamped synchronization feature is available in Settings ▸ Sync where you can either "Start using sync" or "Manage your synced devices". You can share apps, bookmarks, extensions, history, settings, themes, open tabs, password and addresses between Brave browser instances. Bookmarks is the only item enabled when you enable the feature.

Some details about the synchronization feature works beneath the hood can be seen by typing the special brave://sync-internals/ URL into the address bar. That special page reveals that your data is sent to https://sync-v2.brave.com/v2 in encrypted form. It does not look like the Brave Software corporation can spy on the data you synchronize. We have not read all of the relevant code so we can't say for sure.

The built-in "Brave Shield" advertisement filter supports Ublock Origin style $generichide and $ghide rules as of this release. That is an improvement but the "Brave Shield" web filter remains both border-line useless and outright broken as of this release. Visiting a hand-full of pages with the Brave Web Browser reveals that it does not remove all those pointless and utterly annoying "cookie warnings" the modern web is riddled with. There is, in theory, a solution: You can visit the special brave://adblock/ configuration page and enable additional filters from a pre-defined list. The Easylist-Cookie List is available there but thge AdGuard Annoyances and Fanboy’s Annoyance lists are not and you can not add additional blocking lists.

The "Brave Shield" web filter may be an improvement for those who are use web browsers without any advertisement filtering but it is not something power-users fill find to be satisfactory.

Ublock Origin does work with Brave so you can install that and use that in addition to the useless built-in "Brave Shield" if you want a web garbage filter that is more powerful and much more configurable. You will have to use both if you install another advertisement filter, you can not disable the built-in "Brave Shield". There is a setting under Settings ▸ Shields where you can set Trackers & ads blocking to Disabled but that doesn't actually work. You can also flip a switch to supposedly turn it off on a per-site basis but that switch is just there for show, turning it on or off on a per-site basis does absolutely nothing.

Links Typed Into The Address Bar Are No Longer Re-Written

Brave used to re-write and add affiliate codes to certain URLs when they are manually typed into the address bar. That "mistake" is corrected in this release.

The Brave browser removes the advertisements from honest website publishers struggling to keep the lights on even if you turn the built-in Brave Shield off in the interface. The Brave Software corporations substitute "solution" is to give Brave browser rewards in the form of a digital currency token called BAT which they, in turn, can donate to the publishers of the websites they visit frequently if those website publishers decide to participate in Braves "Rewards" for Creators program.

BAT earned by viewing in-browser advertisements from Brave, not websites you visit, can only be withdrawn to a London-based online web wallet partner called Uphold. Signing up to that service from within the Brave browser is only possible if you have earned a minimum of 25 BAT as of this release. That restriction seems kind of pointless since you can go to uphold.com/signup directly and sign up even if you do not use or never heard of the Brave Web Browser.

Creating an Uphold account directly, by-passing the new 25 BAT minimum restriction, is as pointless as the new restriction. The current withdraw fee at Uphold is 30 BAT thanks to the currently very high fees on the underlying Etherium blockchain the BAT token is registered on. You need to have earned 31 BAT to withdraw 1 BAT to an exchange where you trade it for actual usable traditional currency. Most exchanges have their own withdraw fees which means that you can realistically forget about ever getting a single cent from the Brave Rewards program even if you enable Brave Rewards and use the Brave browser all day every day.

Your Installation Date Will Be Recorded

The Brave browser calls home by sending to the Brave Software corporation "pings" on a regular basis. Those pings include the installation date the first 14 days after the browser was installed as of this release. The new version will also send a x-brave-api-key along when it calls home.

Linux users can install the latest Brave Browser by manually adding one of the distribution-specific repositories they list at Installing Brave on Linux page. Windows users can get it from brave.com/?ref=lin778/ (affiliate link). Android users can acquire it from its Google Play Store page.

So I take it you don't really care for Brave!