Brave is a Chromium-based free software web browser for GNU/Linux, Windows (32 and 64-bit) and Mac OS. There are also mobile versions for Android and iOS. It's performance is within margin of error of other Chromium-based browsers like Google's Chrome. Other aspects are also the same, it is essentially the Google's Chrome web browser with different branding and some additional features like web advertisement and tracker blocking, a built-in crypto currency wallet and a opt-in rewards system where users can get paid cryptocurrency for viewing advertisements that are built right into the browser. It's overall alright. Installation may be a bit tricky since no GNU/Linux distribution includes it in their repositories.

The Brave Web Browser is free software under the Mozilla Public License 2.0. It is in principle free open source software but it's development is heavily controlled Brave Software - it is not a truly free foundation-developed software project like Debian.

None of the popular GNU/Linux distributions include the Brave browser in their repositories. There are special repositories maintained by Brave which can be added to the most popular distributions. Instructions for adding these are available at readthedocs.oi: Installing Brave. These instructions work fine on Ubuntu, Linux Mint, Debian, Fedora and OpenSUSE. There are some instructions for compiling Brave on it's Microsoft github page. They look strait-forward but they are not; you are essentially out of luck if you are not using one of the distributions they make packages for - even if you are a wizard.

Versions for other operating systems like Windows and Mac OS can be acquired from brave.com/download/. 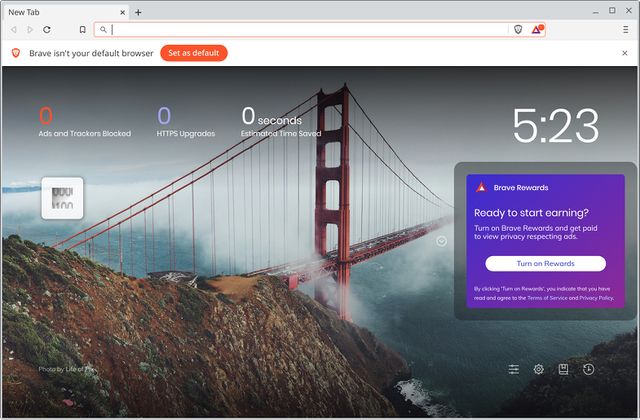 The Brave Browser v1.0.1 as it looks default, out-of-the-box

Brave is essentially the same web browser as Google's Chrome. It is build from the same Chromium browser source three Google uses to build their Chrome web browser. Google adds their logos and branding to Chromium to make Chrome and Brave adds it's own branding and a few extra features like a built-in crypto wallet to make the Brave browser. It is essentially the same browser.

Brave comes with a built-in extension called Brave Shield. It has a knob for blocking "Cross-site trackers" and scripts. "Cross-site trackers" includes most of the advertisements on the modern web and they are, by default, blocked. The built-in adblocker can be configured from the menu item "Brave Ad Block" which leads to the special page brave://adblock/. Additional filter lists from a built-in list can be configured. It is also possible to add custom filter entries. It is NOT possible to add additional filter lists from URLs; a third party extension like Ublock Origin is required to get that functionality.

Brave's "Rewards" program is a unique browser feature other browses do not have. It is a system where you can get paid when you surf the net with this browser and either keep that reward money OR make one-time or regular payments to websites you enjoy. 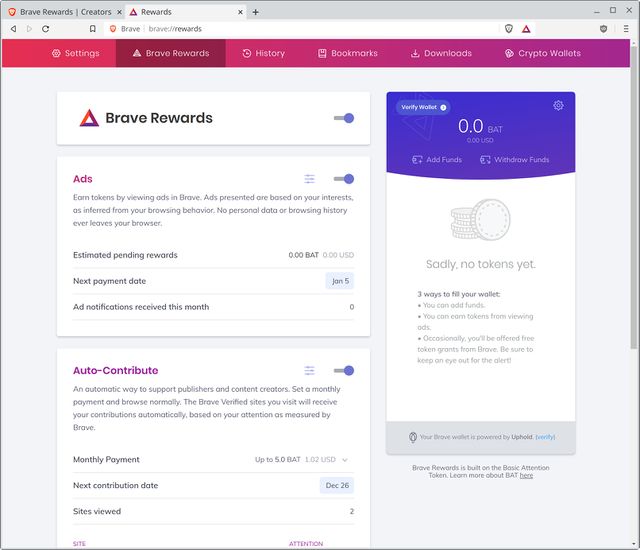 The "Brave Rewards" page in Brave v1.0.1. You can turn ads which will give you BAT currency money for viewing them on and off. You can choose to auto-contribute the money you make to the websites you enjoy - or keep it or cash it out to a local currency.

The scheme for earning "rewards" in the form of the digital currency BAT (Basic Attention Token) is to replace advertisements on websites with other advertisements sold by Brave. Viewing these Brave-only advertisements will "reward" you with some tiny amounts of the BAT currency. Brave's advertisement network was announced on November 13th, 2019[1]

Brave has a system where you can donate the BAT tokens you make to the websites you visit regularly. You can either make one-time donations or use it's "Auto-Contribute" feature to make monthly contributions. 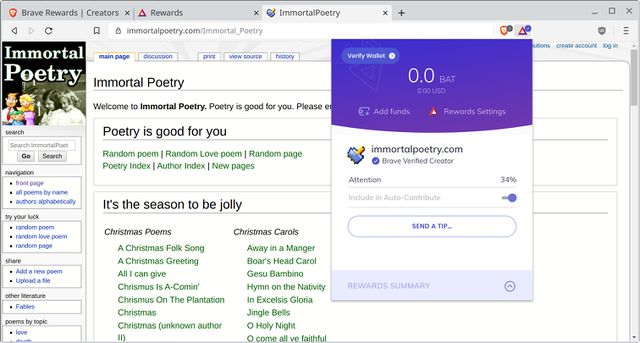 Brave will show a small warning saying This creator has not yet signed up to receive contributions from Brave users. Any tips you send will remain in your wallet until they verify. in it's tipping box if a site isn't "verified" with them. Verifying requires all kinds of privacy-violating submissions such as sending a copy of a photo ID. That is one of several good reasons why someone running a website would refuse to participate in this scheme.

Most GNU/Linux distributions add a patch-set for hardware accelerated video decoding to the chromium packages they include. The chromium-freeworld package in the Rpmfusion repositories for Fedora have patches adding both privacy-features and hardware video decoding using VAAPI. It is possible to check if this is enabled by vising the special address chrome://gpu where "Video Acceleration Information" will either list supported codecs and resolutions for encoding and decoding or not show any useful information. It is very likely that support is there if you installed chromium using a GNU/Linux distributions repositories and your hardware has video decoding circuitry.

Brave is based on Chromium so it would be quite possible for them to tackle the patch-set everyone else is using on to it. They don't. The Brave browser will direct to chrome://gpu to it's re-branded brave://gpu. The "Video Acceleration Information" section there will, in Brave, show that x264 hardware encoding is supported - but decoding is NOT.

It is worth noting that Google's Chromium-rebrand Chrome has the same shortcoming. Google has made it clear that they will not let GNU/Linux users have hardware accelerated video decoding - ever. 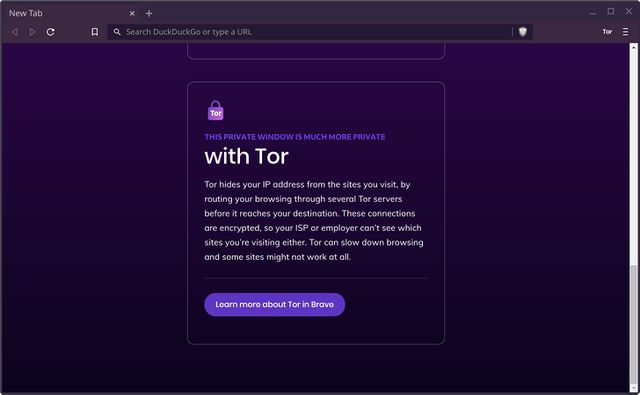 Brave has a built-in private browsing mode which relays traffic through the Tor network.

Brave has a built-in "private" mode (instead of the "Incognito" mode in Chrome/Chromium).

Brave's What is a Private Window with Tor? does not answer the obvious question: How does Brave connect to the Tor network if the local host does not have a Tor client running? The answer seems to be that Brave has a built-in Tor service capable of talking to Tor servers on their standard ORPort.[2].

A close-up inspection of the network traffic reveals that Brave is in fact talking to various Tor servers on their ORPort 9001 as if it was a regular Tor client. There does not appear to be any gigantic problems with their implementation. 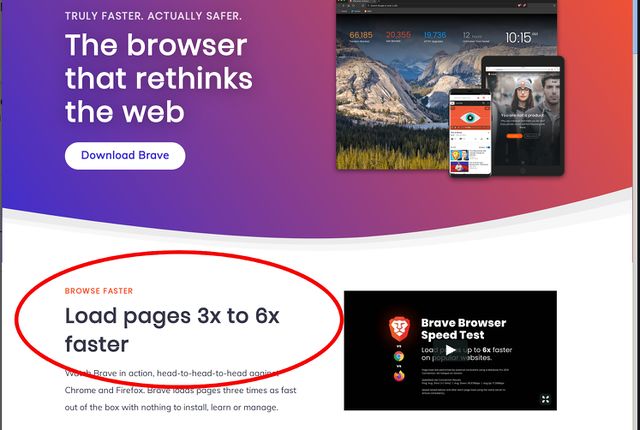 brave.com/features/ story regarding the Brave browsers performance as of November 2019 is:

Brave story regarding their web browser's performance is hogwash. It is, in fact, not 3 or even 2 times faster.

Google's BSD-style licensed Chromium web browser is faster than Mozilla Firefox in all the web browser tests we run regularly except for WebXPRT 3. This has been the case for quite some time. It therefore makes sense that Brave, which is mostly a re-branded Chromium, would perform a bit better than Firefox in most tests. And it does. It would also be safe to assume that Brave's performance is within margin of error of Chromium's performance. Brave's scores are marginally better than Chromium's.

Brave could claim that their browser "is faster" than Firefox and Chromium and not lose face when cold hard data is presented since it is, in fact, marginally faster. That is not what their are claiming. Their story is that Brave is 3x-6x faster. It's not, not by a long-shot. Brave isn't even 2x faster. They could have claimed that Brave is 0.388x faster than Firefox and 0.015x faster than Chromium based on the Basemark 3.0 results and told the truth. They didn't, instead they chose to dishonor and disgrace their Brave brand by flat out lying about their browsers performance.

Brave's marketing propaganda[1] elaborates on their "3 to 6 times faster" hogwash lie. Their story is that the built-in Brave Shield tracker and advertisement blocker is what supposedly provides their claimed huge performance gain. There is something to this, pages riddled with trackers and advertisements are slow due to the additional http/https requests and the additional JavaScript code the browser has to run. Comparing page loading times with default unconfigured versions of Firefox and Google Chrome and Brave will give Brave a clear win. However, that is not an apples to apples comparison. 76% of our readers were using some kind of advertisement blocker in September 2019. The only differences between Firefox or Chrome or Chromium with Ublock Origin and Brave with it's built-in Brave Shield are that a) Ublock Origin is a third party extension which has to be installed manually (something the vast majority do) and b) Ublock Origin gives you more control over what filter lists are used. Ignoring any difference an adblocker provides is fair to our readers since the vast majority use one. It would be different if this was site named iToddler Reviews.

Hardware vendors are known to send marketing propaganda titled "A Reviewers Guide" along with their products. Those guides are typically filled with marketing talking points they'd like us to parrot. Brave's got a 43 page long "1.0 Release Reviewer's Guide" created in Adobe InDesign 14.0 (Macintosh) on November 6th, 2019. This review is probably not in-line with that propaganda pamplet since we didn't actually bother to read it. It is, after all, 43 pages long.

Brave has proven itself to be a honorless for-profit corporation which can not and should not be trusted. They are constantly dishonoring themselves by outright lying in their marketing propaganda. This is something one may want to consider before installing any piece of software from them which is closely tied to their servers.

The Brave browser does performs marginally better than other Chromium-based browsers. The difference is near-zero but it's there: Brave is faster by a slim margin.

Brave does have some built-in privacy features but they are not as good as stock Chromium with the Ublock Origin add-on. Brave's scheme of replacing advertisements instead of outright eradicating them makes it a worse overall experience.

Brave does have a very nice and handy private browsing mode which leverages the Tor anonymity network. This is a very nice feature other browsers lack.

Brave doesn't really have that much great going for it. It is essentially just a re-branded Chromium.

You can, of course, install Brave and try it if you are a wizard who's able to follow the not all that user-friendly GNU/Linux installation instructions. All the distributions have Chromium available in their package managers; Brave requires special steps. It's could worth trying it if you know how to follow those steps. If you don't and you would have to ask a friend then don't bother, you will not be missing out on anything.

I use brave and after disabling the monetization scheme it turned the best browser i've ever used. I believe you, but on my old windows 7 it performs noticeble better than chrome. Add blocker works great