The latest hardware survey from Valve's Steam game store and launcher has GNU/Linux marketshare at a yearly low of just 0.67% market share. The other operating system numbers in their hardware survey numbers for December 2019 are a bit strange with Windows 10 showing a reduction of 13.14% in favor of Windows 7. 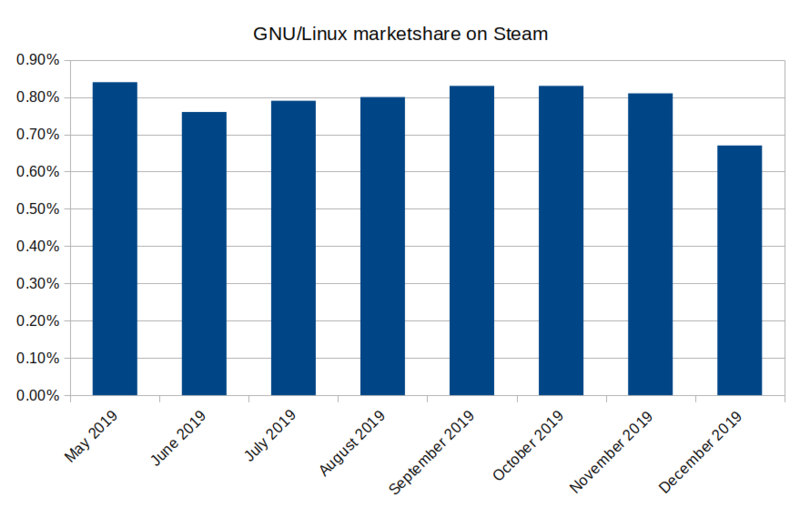 GNU/Linux was never a very popular gaming platform or a widely used desktop platform for that matter. The situation is not improving, the latest monthly Steam hardware survey numbers do not indicate any rapid increase in interest for free software operating systems among Steam users.

Steam users with a total of 16 GB system memory increased by 8.41% in December making 16 GB RAM the most popular configuration with a 46.37% total. 8 GB RAM is also trendy with a 30.69% total. Some RAMlets never learn, 6% of Steam users get by with just 4 GB system RAM. Memory prices are currently at a multi-year low with industry "experts" (insiders) expecting a price-hike in 2020. It is a good time to pick up some RAM if you are stuck with 4 or 8 GB, specially if you have an older system with DDR3. Both regular and ECC DDR3 memory sticks are cheap and abundant in the used market (no-no wasting money on overpriced brand new DDR3 which has been collecting dust on shelves for years) and DDR4 is cheaper than it has been in years.

Nvidia's GeForce GTK 1060 was the biggest GPU hit in December. It got a 5.66% marketshare increase bring the total percentage of Steam users gaming on that card to 20.3%. Graphics cards from competitor AMD are not gaining popularity and their total share is so low it's barely measurable.

Electronic Arts and others outright banning paying customers who use their software entertainment products like Battlefield V on GNU/Linux machines is likely not helping GNU/Linux become a mainstream gaming platform.

Those are all interesting points. I would love to hear Valve's comments on this.
Permalink