The South Korean Internet giant NAVER has released a new version of their proprietary and unusually feature-rich web browser. The Whale web browser has a video conferencing solution called "Whale On", which has been greatly improved in the latest release, and a music player, a calculator and many other interesting features other web browsers do not have. Whale is available for Linux, Windows, macOS, iOS and Android. 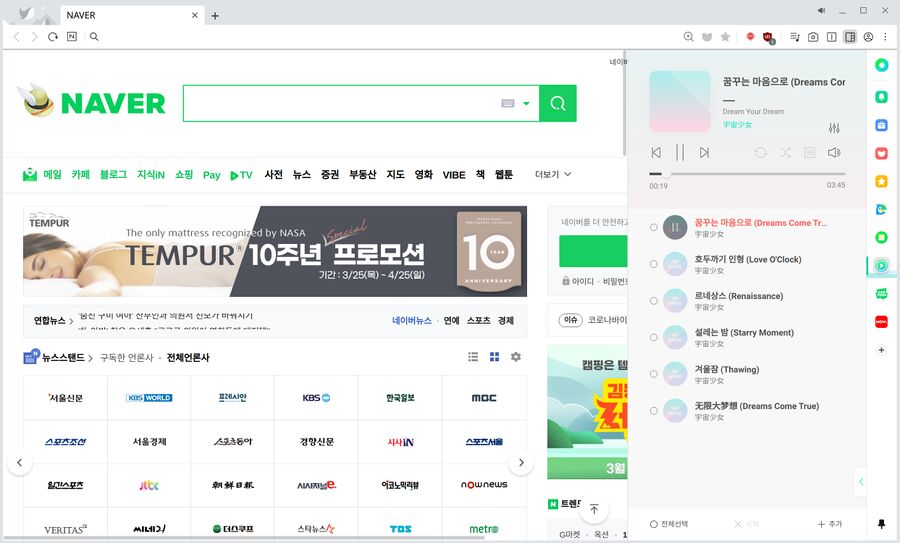 NAVER whale is a web browser unlike most web browsers western users are familiar with. It is a regular web browser based on the Chromium rendering engine, so it is just like other Chromium-based web browsers like Google Chrome, Microsoft Edge and the Brave Web Browser when it comes it basic web page rendering (Whale 2.9.115.16 is built on Chromium 86.0.4240.198). The sidebar on the right-hand side and all the built-in features it and the default toolbar next to the address bar provide are, on the other hand, not at all similar to other web browsers.

The sidebar is full of features that are unique to NAVER whale. There's a toolbox with a clock, an alarm, a calculator, a calendar, a conversion tool and other useful tools, a scrapbook, a bookmark manager, a language translator, a music player, a comic strip reader, something called "NOW" and a few online services you can only use if you have a NAVER account. 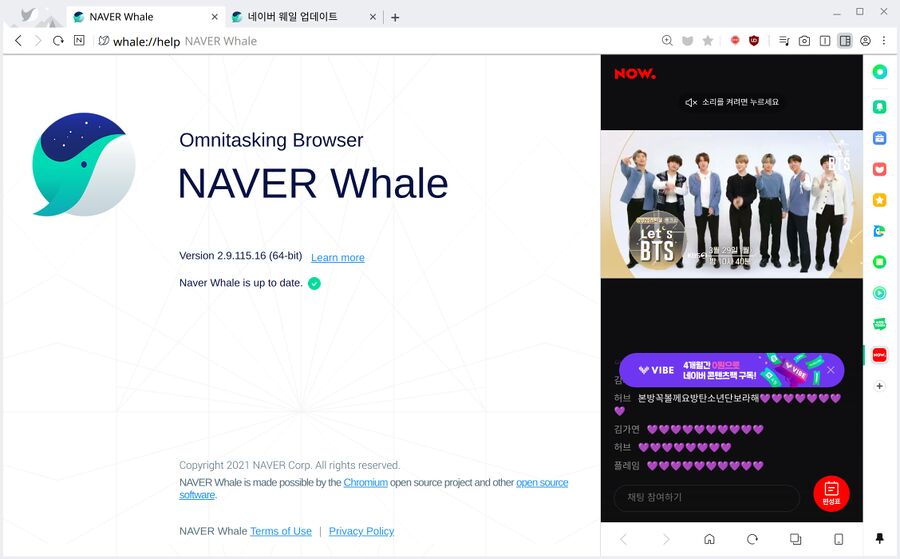 NAVER whale has a built-in video conferencing tool called "Whale ON". Most of the improvements in the latest version revolve around it. Whale 2.9.115.16 improves "Whale ON" with a new virtual background feature, a new waiting room feature and the ability to show up to 49 participants on a single screen. The quality of shared screens in "Whale ON" has also been greatly improved. You can read more about "Whael ON" at help.whale.naver.com/en/desktop/whaleon/ if you happen to read Korean. You probably, rightfully, assume that there is English text on a page when /en/ is in the URL - but you'd be wrong, it is all in Korean. There is, luckily, a translation feature in the sidebar you can use.. 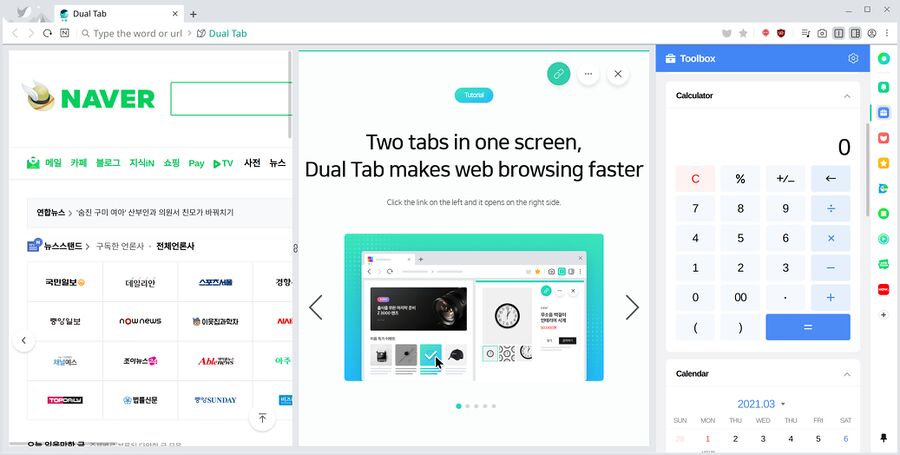 Naver Whale with "dual tabs" (the main browser window split in two) and the built-in calculator in the Toolbox.

The other improvements in Whale 2.9.115.16 are very minor. There's a fix for the calculator, not that we ever noticed anything wrong with it in previous versions, a bug-fix for the built-in photo editor and a general mention of "crash fixes".

Installing NAVER Whale is really easy if you are using a Debian-based GNU/Linux distribution or one of the big proprietary operating systems such as Windows, macOS, iOS and Android. You can simply go to whale.naver.com/en/download and click the Download button next to your operating system.

It is not that easy if you are using a GNU/Linux distribution that does not use the .deb package format. You will, in that case, have to use something like alien and convert the .deb file to whatever package manager format your distribution uses.

A working package for RPM-based distributions can be made using this shell script - if, and only if, you have alien installed:

alien can also be used to make general tar.gz tarballs that can be used on other distributions.

You can learn more about the Whale browsers unique features in the NAVER Whale boarding guide. Most of the text is available in English but do expect to encounter some pages that are in Korean even though there is a /en/ part of the URL to them.