Chinese telecommunications giant Huawei has been working on a scalable operating system since at least 2013. Huawei has now released the source code for HarmonyOS under the 3 clause BSD license has part of their new OpenHarmony project. The new operating systems "liteos" kernel is currently limited to devices with just 128 MiB RAM. A closed-source Harmony OS 2.0 beta version with support for devices with up to 4 GiB memory will become available in December with OpenHarmony source-code coming in April 2021. OpenHarmony development boards are available for around $50 plus shipping. 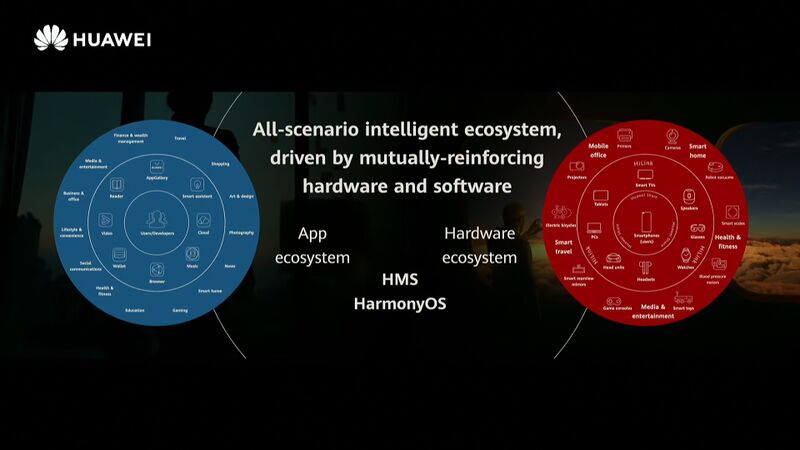 Huawei promises a wide ecosystem for their Harmony OS.

Huawei announced the Harmony OS operating system last year after six years of development[1]. Very little was known about this operating system until now and Huawei employees were extremely tight-lipped about it.

Huawei is using a release model similar to the Android Open Source Project (ASOP). Closed-source versions, called "HarmonyOS", are released first and source-code releases, under the "OpenHarmony project" brand, are made available after four to six months. A "OpenAtom Foundation" has been set up to manage the OpenHarmony releases.

Harmony OS is written in clean and fairly beautiful C[2]. It uses a microkernel similar to GNU Hurd in concept (Linux is a monolithic kernel). Communication between the microkernel and external kernel services such as drivers, file systems and the network stack is handled using fast IPC calls.

Developers who want to make applications for OpenHarmony can get started using the Hi3861 Development Board which is available in several variants such as the bare HarmonyOS HiSpark IPC DIY board and the WIFI-capable HarmonyOS HiSpark Wi-Fi IoT. The optional Wi-fi connectivity is limited to 2.4 GHz wireless N[3].

HarmonyOS is built to be cross-platform from the ground up. The initial HarmonyOS release is targeting IoT devices, smart watches and simpler devices with 128 kB to 128 MiB memory. The next version will be capable of running on smartphones and more advanced devices. It will eventually be able to run on regular consumer laptops and desktops too. Huawei promised fast and secure cross-device integration between different HarmonyOS devices during their keynote presentation.

Huawei has also releases source code for a lot of other technologies like their camera toolkit and their augmented reality map system. Source code for a total of 134 different repositories have been made available under the OpenHarmony banner. Several repositories are not directly related to Harmony OS. A few repositories contain previously unreleased Linux kernel drivers and modifications. Others contain custom forks of common libraries like libpng which are, apparently, a part of the "OpenHarmony 1.0 baseline".

The full keynote can be seen at YouTube at youtube.com/watch?v=fnl7XD0x5gg. It contains several audio tracks subject to Copyright which makes it impossible to re-upload it here.

The OpenHarmony Harmony OS source code can be acquired from openharmony.gitee.com/openharmony.