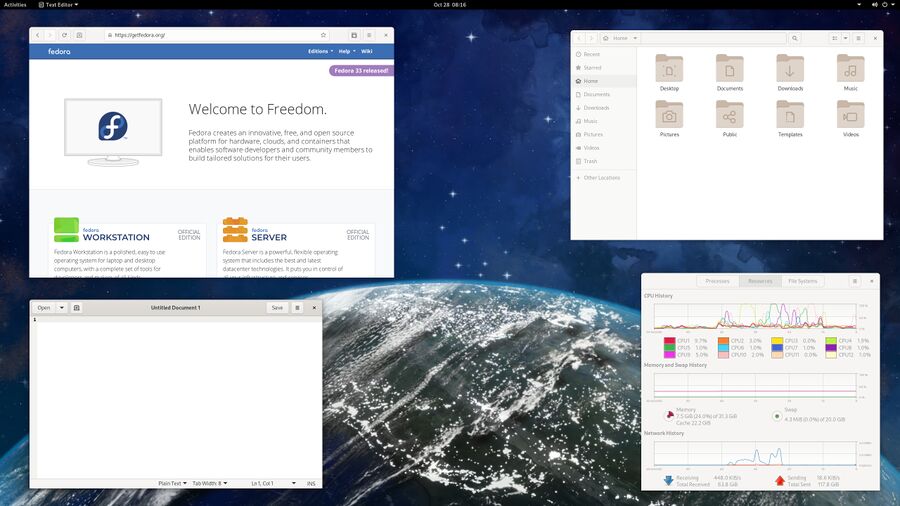 Fedora is a short-lived GNU/Linux distribution from IBM subsidiary RedHat with releases every six months and a one-year support cycle for each release. This allows Fedora to have more bleeding edge packages than other more long-term distributions.

The default Fedora 33 "Workstation Edition" features the latest GNOME 3.38 "Orbis" desktop environment, Linux 5.8 (though 5.9 is available in updates-testing), mesa 20.2.1 as the graphics stack, Wayland 1.18.0 as the display server, Python 3.9, Ruby on Rails 6.0, Perl 5.32 and LLVM 11. The new "welcome tour" introduced in GNOME 3.38 is present, and the desktop wallpaper is set to change depending on time of day. The system theme is the default GNOME theme which has a mix of light and dark applications. Some applications are almost white, others, like the GNOME terminal, are black. The workstation edition has option to change the system theme or customize how it looks beyond wallpapers, it is possible to change it and they have not yet removed the ability to add your own background images - one at a time, you can't add or browse folders.

There are a few odd changes to Fedora 33 desktop users and specially laptop users should take note of. The default for a new installation is to use btrfs, not ext4, for the file system and the installers default disk partition layout does not include a swap partition. That's a problem if you want to hibernate to disk or use hybrid suspend on a laptop. There is no hibernation or hybrid suspend option in the GNOME desktop the workstation environment ships with even if you add a swap partition yourself, but it is possible to get that very basic functionality in the Xfce and KDE Plasma spins. Other basic functionality like the ability to change themes are also present in those spins.

Fedora 33 comes with a systemd service called zram-generator that will make a zram swap device using up to half the system's RAM or a maximum of 4 GiB as an "alternative" to a disk-backed swap device. Using a zram swap in addition to a disk-backed swap makes sense on any Linux-distribution. Removing the ability to hibernate to disk by not having a disk-backed swap at all and no menu option to hibernate or hybrid suspend even if you add a disk-backed swap yourself seems like a rather odd design-decision. Encryption keys are kept in RAM if you use full-disk encryption, which is supported, and you suspend to RAM, so on hibernation support means security-minded Fedora 33 laptop users can't just close the laptop lid and re-open it and type in a password and continue where they left off.

The way the default GNOME Software Center works has also been changed in a puzzling way. It now defaults to using Fedora's Flatpak repository over Fedora's regular RPM-based package repository when new software is installed. A lot of the packages in Fedora's Flatpak service are really old compared to the packages in the regular repository, so you will end up installing wildly outdated versions if you're not careful. It defaults to using Flathub over the regular RPM-based repository if a package is available there and it's not in Fedora's own Flatpak repository.

Fedora 33 is available in a lot of different spins, there are options beyond the default "Workstation" edition for those who don't like GNOME. Fedora 33 is available with LXDE (even though that desktop is no longer supported upstream), LXQt, KDE Plasma, MATE and Cinnamon. There's also task-specific spins for robotics, science, gaming and server purposes. Most spins are only available for x86-64. The "Workstation" edition is also available for ARM AArch64 and Power and there's a Server image for S390x. There is, additoinally, a "Silverblue" edition that uses OSTree instead of a traditional package-based root file system.

Torrents for all the Fedora 33 spins that are available can be acquired from torrents.fedoraproject.org.

I'm in love, my favourite de just got even better, though split dns (systemd) was a pain in the beginning. Also the usual gnome/wayland updates are welcome.

I'll definitely be installing Fedora 33 KDE on one of my ThinkPads.