Sociologists have long recognized the threat of insecure people in positions of power (imposters who overcompensate for a lack of qualifications). Overzealous moderators on a power trip are posing a threat to the integrity and atmosphere in Free software projects, where pressure, fear and vengeance become stronger motivators than something positive like altruism and enthusiasm (sharing one’s technical skills) 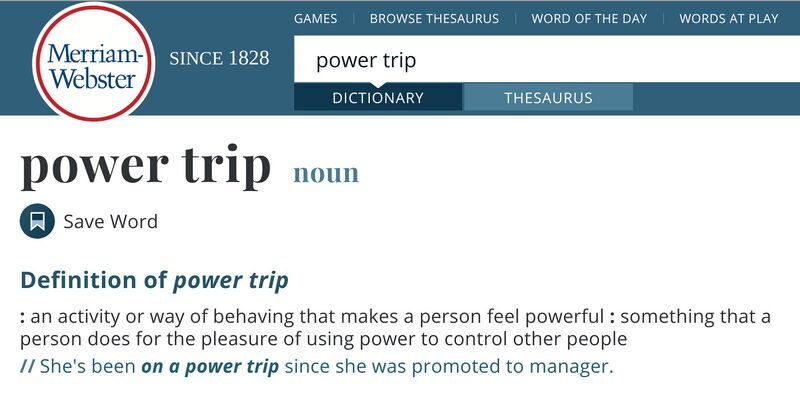 AS NOTED by Daniel Pocock several times over the past year, it’s not uncommon to find some harassment by the ‘anti-harassment’ people, who are equipped with disproportionate/asymmetric power over those whom they assertively accuse and duly punish (often without due process, let alone a process that can be publicly seen to be broadly trusted).

It is a true shame if AH (anti-harassment) teams become hypocritical, or wind up perpetuating the same problems they were tasked to tackle. Oversight and introspection may be constantly needed.

This isn’t to say that abuse isn’t happening or ought not be tackled. Over the years I’ve witnessed abuse myself and sometimes something must be done; protocols are needed to ensure it is done consistently. Transparently too (this is often possible without focusing on people’s names).

First and foremost, in Free software communities members ought to treat all people like human beings (never mind various ‘parameters’ that differentiate them; every person is unique). Disagreement is fine, threats are not. In this age of provocation and entryism, however, if someone with little technical contribution rides in with the sole aspiration of becoming a ‘moderator’ (or ‘cop’) in a project, be sceptical and don’t tolerate any action suggestive of power trips rather than actual needs. A lot of these people never contributed anything technical to any project (some cannot even code), so they compensate for it by bullying those who did. They love the sense of power; such people must never be given any position of authority/power, which will inevitably be misused. The United States has had a president like that for nearly 4 years.

“Be excellent to each other” isn’t sufficient as a mantra when people come with the sole purpose of provocation, or weaponizing “manners” to misframe the accused as an intolerant accuser; we’ve seen countless examples of that over the years and less than a couple of years ago Martin Krafft wrote the following message publicly in the Debian mailing lists. It’s about Debian Account Managers (DAM) and people who turned against him (like they did Daniel Pocock and others):

It's very sad to read about what's going on.

I know that there's been at least another case, in which DAM and AH have acted outside their mandate, threatening with project expulsion, and choosing very selectively with whom they communicate. I know, because I was being targeted.

Neither DAM nor AH (the same people still active today) made a single attempt to hear me. None of my e-mails to either DAM or AH were ever answered.

Instead, DAM ruled a verdict, and influenced other people to the point that "because DAM ruled" was given as a reason for other measures. This was an unconstitutional abuse of DAM's powers, and in the case of AH, the whole mess also bordered on libel. Among others, the current DPL Chris Lamb promised a review in due time, but nothing ever happened.

It's not going to be a constructive use of anyone's time to attempt to establish transparency into issues of the past, and I've disengaged anyway, as a result.

But we, as a project, need to ensure that there is more transparency moving forward. And I think it would be wise to review the way that DAM and AH operate. We need to ensure they stick to protocol, and are held accountable for the use of their powers.

Thanks for your attention,

A lot of articles by Daniel Pocock dissected this kind of modus operandi. Pocock is now back in Planet Fedora, focusing again on technical projects, having done a splendid job exposing a real social problem in Free software projects. Agitation and irritation do no good to people’s freedoms; they provoke people. In the name of “protecting” people, typically... 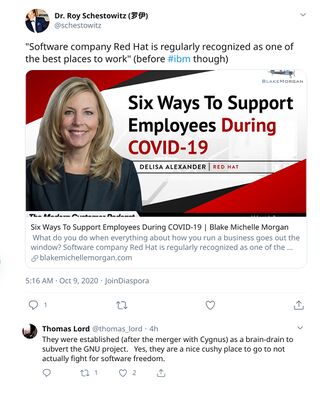 Opinionated people are very much needed when we deal with technical matters as well as ethics, such as software freedom. We don’t want mere ‘robots’ to produce code. Some former FSF staff told me some hours ago regarding IBM-led Red Hat: "They were established (after the merger with Cygnus) as a brain-drain to subvert the GNU project. Yes, they are a nice cushy place to go to not actually fight for software freedom." (Shown on the left with context)

There’s this supposedly "moral" or rather immoral travesty wherein programmers with an opinion may be in violation of a Code of Conduct or CoC (facing expulsion, shaming, ostracised forever albeit with no right of appeal). This serves oligarchs best, or companies like IBM with a very dark past of eugenics and overt racism.

Does anyone out there find it a little demeaning when Torvalds refers to Richard Stallman (RMS) as “philosopher” or something similar in Revolution OS when RMS likely wrote far more code than Torvalds ever did? 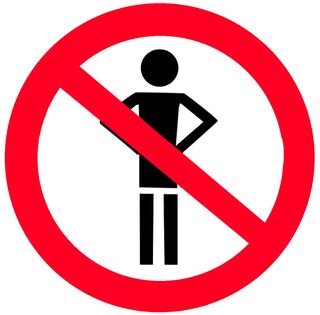 This dumb idea that you can either be a programmer or “philosopher” perpetuates an old myth/rule that coders aren’t allowed to think or have a moral opinion, as in “just code and shut up” (as if Torvalds has no opinions, which he expresses with strong words that run afoul of some CoCs).

Going back to people with confidence or insecurity issues, all they can offer in situations such as these is condemnation with severe punishment, such as banning Torvalds from future events. And for what? Merely expressing an opinion? At one point Pamela Jones of Groklaw deleted a comment posted by Torvalds because he was ranting about RMS. This sure earned Jones plenty of attention, but was this truly necessary? Exercising power in one’s own site at the expense of free speech rights is far too easy, but is that just?