"Linusgate" Leaked: Over 250 Messages About Code of Conduct Complaints Against Linus Torvalds

Debian ‘canceling’ the founder of Linux is no “small potatoes”; and considering the reason (or what this is done for; an expression of an opinion) we probably should be alarmed about ramifications for free speech

Original story by techrights.org. Originally published 2020-09-03.
This work is available under the Creative Commons Attribution-ShareAlike license. 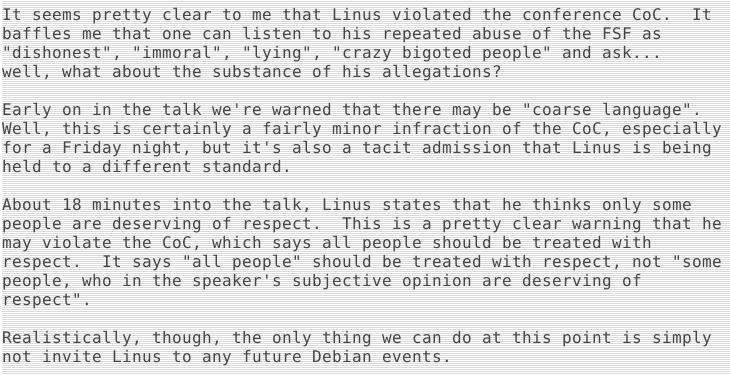 Note: The complaints and the event itself happened in 2014.

THE opinions of Linus Torvalds on a lot of topics I agree with. This includes software patents, the GPL (except GPLv3) and a bunch of other stuff. On many topics I disagree, which is understandable because no pair of people will agree on everything. Torvalds does not like the FSF; this isn’t a secret and over 12 years ago I exchanged some E-mails with him (it was around the time GPLv3 was discussed). He has every right to express that opinion, even if someone felt ‘hurt’ or ‘uncomfortable’ with that opinion. This is what free speech is about, but not everyone shares that view; to some people, only ‘comfortable’ or 100% politically-correct messages are tolerable, acceptable and permissible. So it’s basically a trap, or a sort of ‘set-up’ for canceling or banishing people.

The above message is one of very many (253). That’s from private (high-level) mailing lists of Debian, highlighting what happened after Torvalds had given his talk at DebConf (we shared some videos from that talk last week). We don’t wish to remark on pertinent E-mails; readers can decide for themselves and we’ll remain objective, except for the part where we state free speech comes first and is essential for software freedom. This is a bit of a cautionary tale about Codes of Conduct, which are controlled by or enforced by large corporations inside the Linux Foundation.

Using IRC we’ve studied some of these pertinent E-mails, as a small group, prior to publication. Ryan spotted the part which said: “But a Code of Conduct is only any use if it is enforced, and it is only fair if it is enforced equally on everyone.”

Ryan, who recently witnessed Fedora banning longtime contributors (technical people who actually love and use GNU/Linux), said that the CoC “gets enforced by a lot of nasty trolls who somehow “develop” Fedora from Macs and Edge on Windows 10.” (The enforcers do not even use GNU/Linux themselves!)

“I wonder if the situation in Debian is getting that bad,” he added. “Ubuntu and a lot of distributions are downstream from Debian, and it would be tragic if Microsoft has managed to foist a Code of Conduct on them that is being carried out in the same fashion.”

Ryan then explained why he left Fedora: “I mean, the only point of those “developers” is to character assassinate valuable community members and disappear them. Then your project loses assets and gains trolls. These people have alarmingly been on the rise in Fedora and it was quite a bit of the reason I said, “screw this, I’m out.” It’s all people that we’ve never even seen before who have taken positions in the Fedora project, bowling over community members who have been active… sometimes going back to the Red Hat Linux days.”

Ryan quoted the E-mail which said: “Linus described the FSF as `bigots’. That is clearly beyond the pale.”

Ryan’s response: “So what? He’s allowed to have an opinion, even if it’s unpopular. That’s an accepted norm in civilized countries. You can have an unpopular opinion and, you know what… it doesn’t matter if other people agree. The Freedom of Speech that civilized countries have is specifically to protect controversial opinions to the point where it’s case law in the United States that it would be absurd to presume otherwise. Why do you need an amendment to protect speech that everyone agrees with or is only in line with community norms?

“It’s not like he popped in and said something egregious here. Just disagree and walk away. Unpopular opinions can carry their own punishment, obviously. But the government can’t get involved, and if it does, it’s unconstitutional. There’s a reason why the Communist Control Act has never been enforced against an American citizen. It would be struck down immediately. Even in the 50s.

“It’s ridiculous that people have had any kind of a war or an arms race over what sort of economic system to use, but that’s people for you. Insane. Bringing the world to the brink of annihilation because they use one economic system and you use one that ended up with Jeff Bezos and Bill Gates owning more money than 90% of Americans while our country has been hollowed out by Trump.”

Ryan then quoted from E-mails: “Debian should make a public statement that Linus will not be welcome at Debian events in future. [...] Also, Debian owes the FSF an apology. That apology should be at least as public as the offence. I’m unaware of any such public apology or statement. [...] If I’m understanding this correctly, you’re suggesting that Debian do its best to antagonize Linus Torvalds, much as it has already succeeded in seriously antagonizing Richard M. Stallman.”

“Yeah,” said Ryan, “they wanted to sideline RMS and Linus and mission accomplished. The GNU project isn’t in control of GNU and Linus has no real authority over Linux anymore. Open revolt against GNU was happening before RMS left. I remember that Nano left and then came back. Various projects defied the official statement that they wouldn’t use Github because it didn’t work without non-Free non-trivial JavaScript. Git was designed to be decentralized. The very idea of having to run any sort of JavaScript to get at a repository is offensive. It’s been known for many years that intelligent people can be quite insolent, honestly. It’s not necessarily that they don’t know there are boundaries, but they’re more likely to see them as stupid/trifling, and therefore an annoyance. You know, something to pick at. If it seems that stupid people get ahead it’s because they aren’t smart enough to know they aren’t smart enough, and they take more risks because they’re not thinking about their own limitations and how it could blow up on them. So there’s a lot of incompetent people who fail upwards in this world. President Trump, for example.”

Linux isn’t at GitHub (yet), but Microsoft is still working towards that. Speech and code are both policed by Microsoft at GitHub. Censorship is very commonplace there.

A Code of Conduct was later used against Theodore Ts’o, trying to somehow associate him with rape, based on a rather banal opinion expressed about a decade before the Code of Conduct even existed!

The input from Theodore Ts’o is shown below with some further context (it is also added below/above). We’ll express an opinion in a later article. 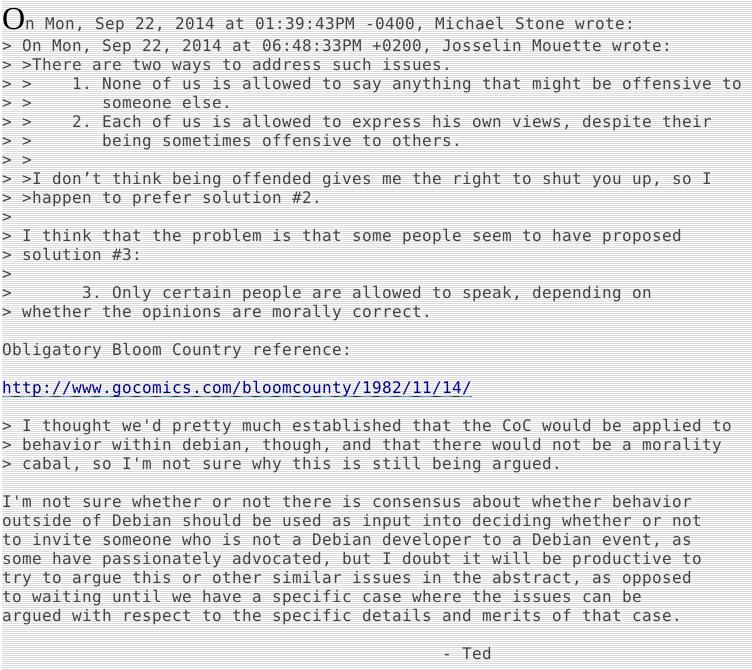