The latest version of the Arch-based community-made GNU/Linux distribution Manjaro comes with a better and more intelligent installer and Linux Kernel 5.10. It is available in three desktop flavors: Xfce 4.16, which is the most popular one among Manjaro users, KDE Plasma 5.21 and GNOME 3.38 (not 40). 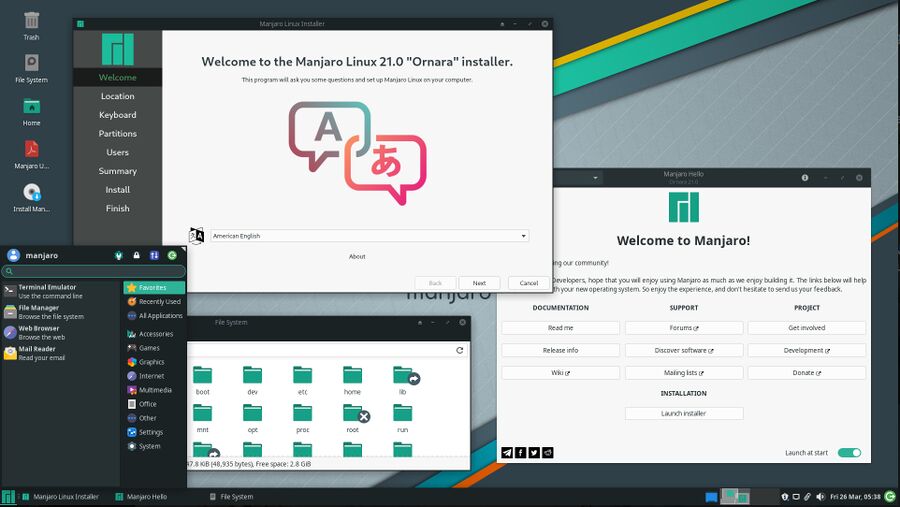 Manjaro Linux 21, Xfce Edition, with the new and improved installer.

Manjaro 21.0 is basically the same kind of GNU/Linux-distribution Manjaro has been for years: It is a community-maintained rolling release distribution based on Arch Linux.

The updated installer is the main highlight in this release. The "Calamares" installer used by Manjaro will now lookup your location using a GeoIP database and use that information to propose language settings, keyboard settings and time-zone. It will only propose defaults based on where it thinks you are, you can override its suggestions if you want to.

Manjaros improved installer will, for some reason, propose "No swap" as a default in the disk Partitions section. It is possible to change that. It is also possible to enable Encrypt system with a single check-box. The rest of the options you have to configure are strait forward with the Users section being a notable exception. It won't let you proceed without entering some string in the What is your name? field - like that's somehow any of Manjaros business. 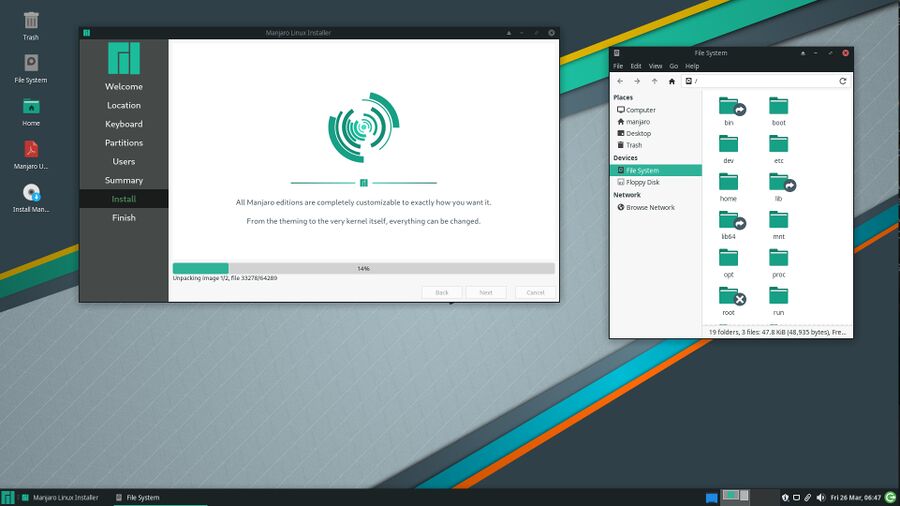 Manjaro Linux 21 installing itself onto a (virtual) computer.

The Manjaro Linux 21 release-notes, and all the useless "news" outlets who just copy-paste the release notes without trying anything they write about ever, go on about the "new" features in Xfce 4.16, KDE Plasma 5.21 and GNOME 3.38. All those desktop environments are months old now (GNOME 40 was just released) so we won't bore you with the somewhat random list of "new" features in those desktop environments that the Manjaro release-team put in their release-notes. None of the "new" features the Manjaro Linux 21 release notes mention are Manjaro-specific, they just packaged what was the latest versions of Xfce, GNOME and KDE Plasma one week ago and called it a day. The Xfce edition will give you a fine mostly-standard themed Xfce desktop, the GNOME edition gives you GNOME and the KDE Plasma edition will give you the KDE Plasma desktop with a Manjaro-specific wallpaper. 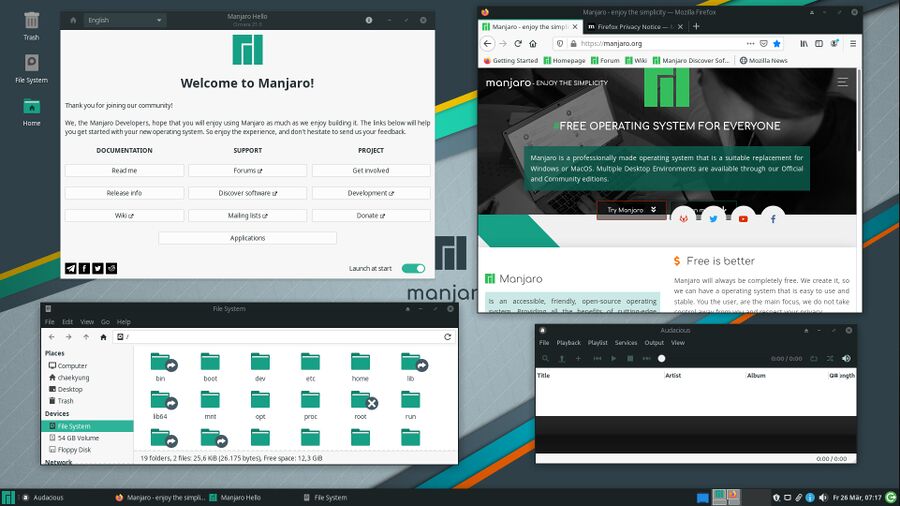 The Manjaro Linux 21 Xfce edition will give you a perfectly reasonable themed Xfce 4.16 desktop. Audacious is the default audio player and Mozilla Firefox is the default web browser.

You can download the latest Manjaro Linux version from sourceforge.net/projects/manjarolinux/files/. They don't seem to offer a BitTorrent option or mirrors of their own, the Manjaro Linux website at manjaro.org will just redirect you to SourceForge when you try to download it. You can enjoy Manjaros own release-announcement by visiting the forum post they wrote about it.

What, if anything, would we add in this article that isn't already covered in our "Manjaro Linux Lead Developer In Hot Waters Over Donation Slush Fund For Laptop And Personal Items" article from July 2020?

I am not aware of any new developments, and I am also not convinced that the entire history of every person involved with a GNU/Linux distribution is even remotely relevant in a story about a new release.
Permalink
Latest News Headlines See the more archive for news stories
Retrieved from "https://linuxreviews.org/w/index.php?title=Manjaro_Linux_21.0_%22Ornara%22_Is_Released_in_Xfce,_KDE_and_GNOME_flavors&oldid=19522"
Categories: