Linux Desktop Market Share Could Have Doubled, Or Stagnated, In Q2 2020

There is no sure way to tell exactly how many people are running a GNU/Linux variant on their desktop or laptop computer. Some industry players like Valve release fairly reliable data on a regular basis so we can get an fairly accurate idea of what the GNU/Linux gaming market share looks like. We can also get a ball-park idea of what the overall GNU/Linux desktop market share looks like from players like Netmarketshare. Their numbers indicate that the GNU/Linux desktop market share DOUBLED in Q2 2020.

"The greatest shortcoming of the human race is our inability to understand the exponential function."

One minor problem with the Netmarketshare numbers is that the Steam hardware survey numbers for June 2020 indicate that the GNU/Linux market share among Steam gamers remained at a measly 0.88%. That is just 0.05% higher than the Steam Linux market share back in September 2019 and it is 0.02% lower than January 2020. 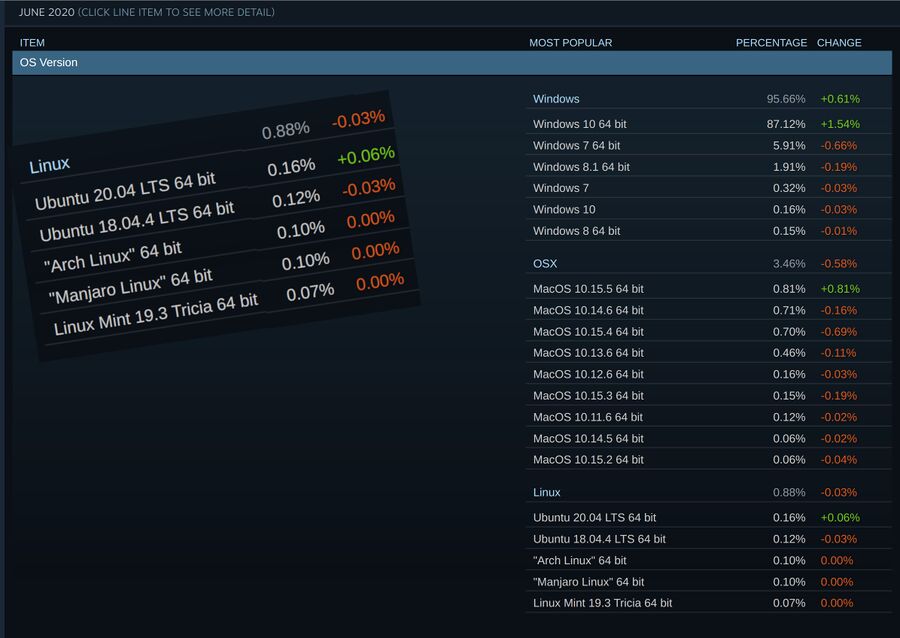 There are several possible ways of explaining the very noticeable difference between the GNU/Linux desktop/laptop market share on Steam and the Netmarketshare numbers. The Netmarketshare numbers could be wildly inaccurate. The Steam numbers could also be wildly inaccurate. It is also possible that both numbers are entirely accurate. It is possible that none of those new GNU/Linux users the Netmarketshare data indicate are even remotely interested in playing Steam games. They could be die-hard free software enthusiasts who only play free software games like SuperTuxKart, SuperTux and The Secret Chronicles of Dr. M.. It is also possible that these supposedly new GNU/Linux users are completely uninterested in playing games regardless of them being free or proprietary.

What, if anything, can we learn the very conflicting data from Steam and Netmarketshare? One take-away is that this is the highest number Netmarketshare has reported since they begun collecting operating system market share data. Another is that something appears to have changed. Their Linux market share graph has been steadily flat for years and years. Now it's suddenly pointing upwards. Something has changed.

It will be interesting to see if the Netmarketshare turn out to be some kind of data collection error or if this is, in fact, a turning-point for GNU/Linux and the free software movement in general. We will monitor their numbers, as well as Valve's Steam numbers, closely in the coming months.