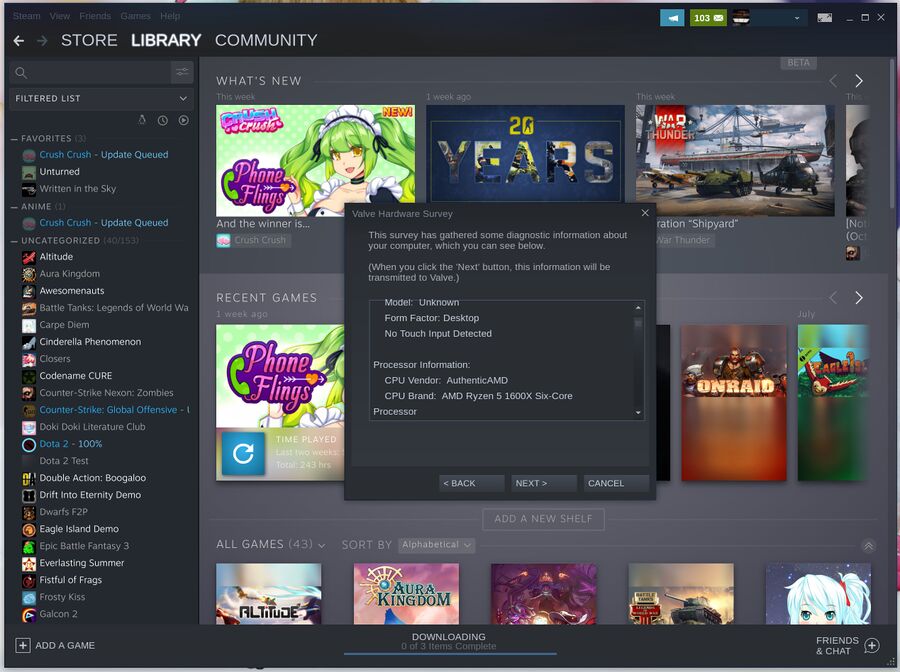 Steam will regular ask random gamers to participate in their hardware survey. Submitting to their demands will result in an automated submission of all kinds of incriminating information about you and your computer including its operating system, CPU, graphics cards and other details privacy-minded people may be reluctant to share with a small multinational corporation.

The monthly swings in GNU/Linux's market share on Steam are dull and not at all interesting. Microsoft Windows currently enjoys a 96.1% dominance with the 64-bit version of Windows 10 sitting at 74.38%. Windows 7, with a current marketshare of 17.71%, lost more than GNU/Linux's entire marketshare in September.

The simple truth is that less than one percent of PC games use GNU/Linux to play despite all the hard efforts by both the free software community and corporations like Valve. This is not a figure which encourages gaming studio CEOs to demand that games are ported to GNU/Linux; quite the opposite. If the cost of doing so is above 1% of the total development costs then it's not worth the investment.

The rest of the Steam hardware survey numbers are uninteresting except for one area: CPU cores. The number of people with 6-8 CPU cores has increased from 10% in September 2018 to 22.37%. Those quad-core parts which were so powerful and recommended by everyone just a few years ago are quickly becoming obsolete. Oh, btw, that's not a result of AMD Ryzen CPUs taking much marketshare away from Intel's offerings, their respective marketshares shifted a mere 1.5% (in AMDs favor) the last three months.