KDE is a free software community organized by the German non-profit organization KDE e.V. KDE is also a commonly used name for a desktop environment the KDE e.V. themselves now refer to as "Plasma".

The KDE community releases a lot of software. The most notable and bigger products they release are: 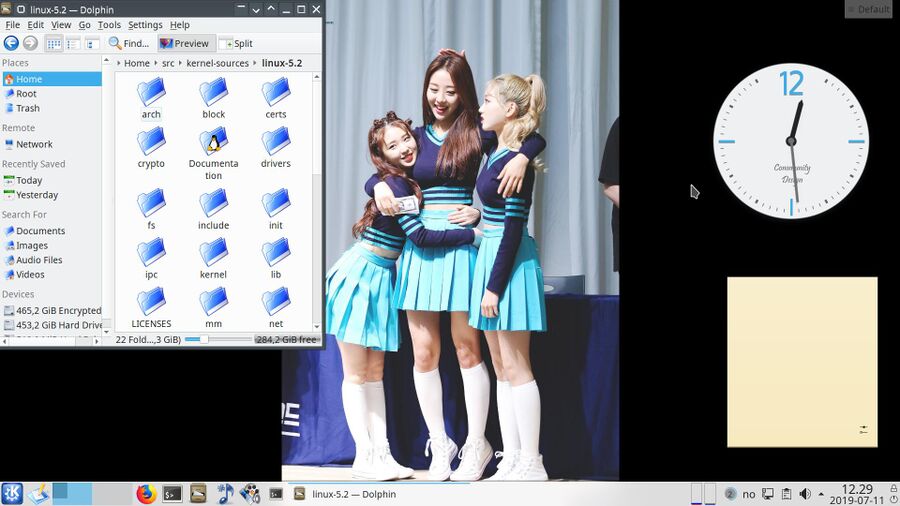 The K Desktop Environment (KDE), now known as "Plasma", is a fully featured desktop environment built on the Qt toolkit libraries and KDE's own "KDE Frameworks" libraries. The KDE deskttop environment has been around since 1996.

KDE applications are built on a set of special libraries built on top of the Qt toolkit. These libraries are called the "KDE Frameworks". It is essentially "Qt libraries with more functionality" or Qt functionality replaced with better and/or more advanced implementations.

The KDE Frameworks libraries make it really easy to write very advanced software in C++ with a whole lot fewer lines that you would need to write something from scratch.

The KDE Gear is very big. There's everything from file managers to games to text editors in each KDE Gear release.

The "KDE Gear" name may be a big confusing since the software compilation now known as "KDE Gear" has formally had names like:

The "KDE Gear" package itself can also seem a bit confusing to end-users, but they are some good reasons why the KDE community packages hundreds of seemingly different packages together in a big bundle.

Most distributions split the package with KDE Gear applications package, formally known as the "KDE Software Compilation" and the "KDE Applications", into smaller packages that can be installed individually. It is unlikely that you will encounter anything named "KDE Gear" in a GNU/Linux distributions repositories, but you will see all the individual packages like KWrite, the Kate text editor, the Dolphin file manager, the Plasma Discover application store and a ton of other applications built on the KDE Frameworks.

KDE has something resembling a community. Most of those in it are developers, there are few people outside the narrow IT bubble involved with the project.

Many of the KDE developers, notably those working for large for-profit corporations invested in the project, get very upset if you point out bugs in their precious KDE Plasma desktop environment. This has some rather odd side-effects: They will not only silence people asking how to work around bugs in KDE software, they will also silence anyone who provides a solution to a bug in KDE software and even patches fixing bugs since workarounds and patches for known bugs are seen as an acknowledgement that the bugs do, in fact, exist in the KDE software. This can be seen on the IRC and Matrix channels controlled by KDE "leaders" all the time and it is also very common on /r/kde on Reddit and other forums controlled by corporate-owned KDE "community" leaders. The result is that a lot of kDE bugs stay around for years and years due to this rather odd and somewhat unique unofficial policy.