Twitter CEO Jack Dorsey is auctioning away a non-fungible token (NFT) for his first Tweet. The current bid is $2.500.000, payable in Ethereums ETH currency, for a 1-of-1 "autographed" version minted on the Etherium blockchain. 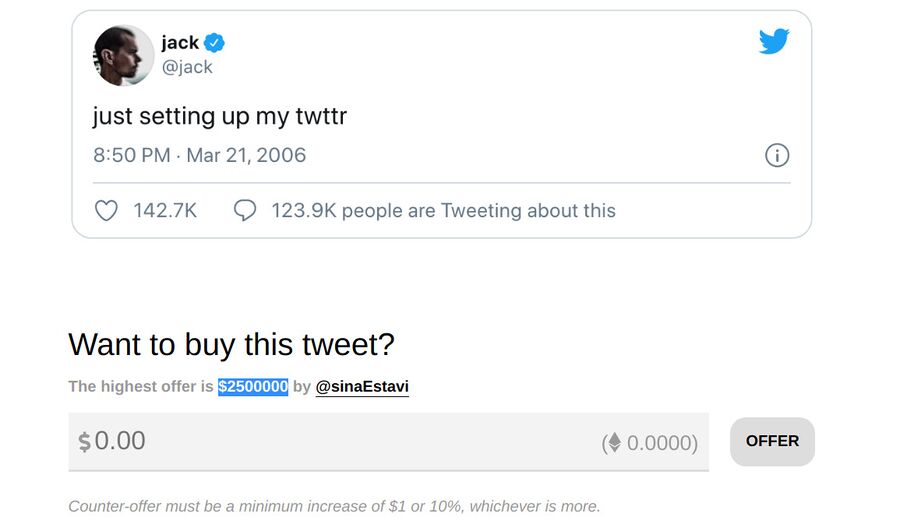 Non-fungible tokens (NFTs) are unique indivisible digital signatures recorded in smart contracts that can be used to represent real-world or digital goods. You can, for example, "own" unique signed NFT for a music album even if there are millions of copies of that music album floating around. The Canadian musician Grimes recently sold a bunch of non-fungible tokens (NFTs) for nearly $6 million. The band Kings of Leon is planning to release an album as a NFT that can be used for special perks like front row seats at concerts.

Twitter CEO Jack Dorsey is currently auctioning away a NFT for his first tweet at the Valuables auction site. The current bid for a digital signature for a piece of text that will remain online on Twitter, with no right to edit or change that piece of text, is a sweet $2.500.000 offered by Bridge CEO Hakan Estavi. The previously highest bid was $2.000.000 offered by Tron founder and CEO Justin Sun. Justin Sun happens to be the same man who bid $4.5 million to have lunch with Warren Buffett in 2019.

The tweets digital signature will be issued on the Ethereum blockchain and the winning bid is to be paid in Ethereums ETH currency.

If you think it is somewhat strange that someone would pay $2.500.000 for a NFT then don't worry, the Valuables FAQ has a perfectly reasonable explanation for why that makes total sense.

"The tweet itself will continue to live on Twitter. What you are purchasing is a digital certificate of the tweet, unique because it has been signed and verified by the creator.

This autographed digital certificate will only be issued once on Valuables. It is signed using cryptography, and includes metadata of the original tweet like: when the tweet was posted, what the text contents are of the tweet, the timestamp of the tweet, and the digital signature from the creator’s crypto wallet address.

Owning any digital content can be a financial investment, hold sentimental value, and create a relationship between collector and creator. Like an autograph on a baseball card, the NFT itself is the creator’s autograph on the content, making it scarce, unique, and valuable."

One minor problem with Valuables story is that it is not guaranteed that "the tweet itself will continue to live on Twitter". That is the one aspect that makes these kind of auctions even remotely interesting; a NFC of one of Donald Trump's tweets would still be available in the Ethereum blockchain even though Twitter deleted all his tweets and kicked him off their platform.

Jack Dorsey's auction seems to have given the Ethereums ETH currency a bid. 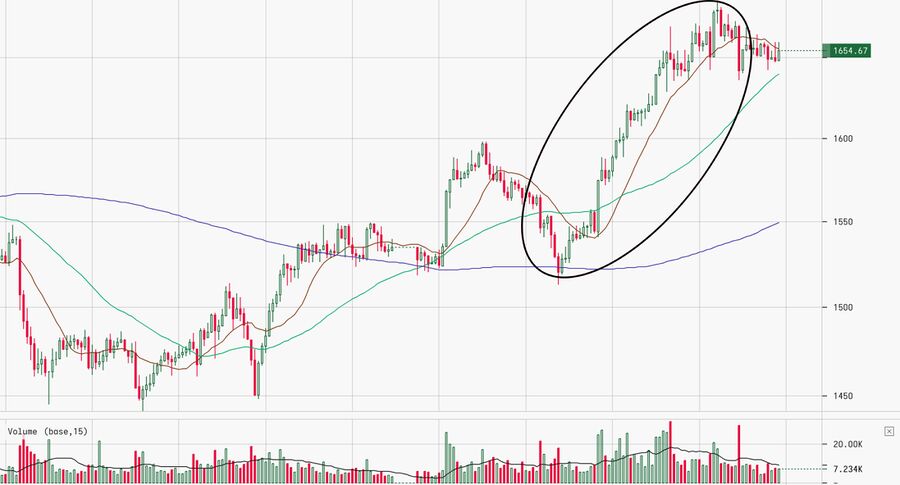 We noted that the two most valuable digital currencies, Bitcoin and Ethereum, have become useless for every-day transactions due to their insanely high transaction fees earlier this week. High transaction fees are obviously a non-issue when very rich people are buying NTF tokens for two and a half million dollars, paying a $20 transaction fee on top of that isn't as noticeable as it is if you want to send someone $100 worth of value.

"A fool and his money are soon parted."

Everyone are not as excited about non-fungible token as the cryptocurrency veterans who are bidding millions for a few bytes stored in a blockchain. Jonathan Turley notes that:

"I admit to being a tech chimp but I fail to see the value of a digital copy of a five word tweet, even with an autographed digital certificate.

With an original recording, you have the actual spoke words of someone like Graham Bell saying “Mr Watson, come here. I want to see you.” That would be the first audible message that could be replayed so others would hear exactly how it sounded. This is a digital copy of words that can be replicated in the same exact form – and have been replicated millions of times.

If we are going to sell off digital relics, I would be more interested in memorabilia of free speech that once defined Twitter and other Big Tech companies. That is now the ultimate “non-fungible token” (NFT) on social media. Indeed, Dorsey’s has added to its scarcity (and market value) with his expanded censorship of opposing viewpoints."

From Just Setting Up My Twttr (Chumps):
Jack Dorsey Reportedly Selling His First Tweet
at jonathanturley.org

Whatever you may think about the intrinsic value of non-fungible tokens, I believe we can all agree that it sure would be nice to get paid $2.500.000 for writing "just setting up my twttr" on the Internet.