Intel has unveiled its 11th generation mobile processors. The new quad and dual-core mobile processors made on Intel's 10nm "SuperFin" process node have all-core turbo clock speeds between 3 and 4.3 GHz and max single core turbo speeds between 3.5 and 4.8 GHz. The claims Intel is making about their integrated Iris Xe graphics chips performance are aggressive. Their story is that the integrated gen12 Intel Xe graphics part of their top-of-the-line 1185G7 IPU laptop processor has 63% better performance than a AMD Ryzen 7 4800U processor. 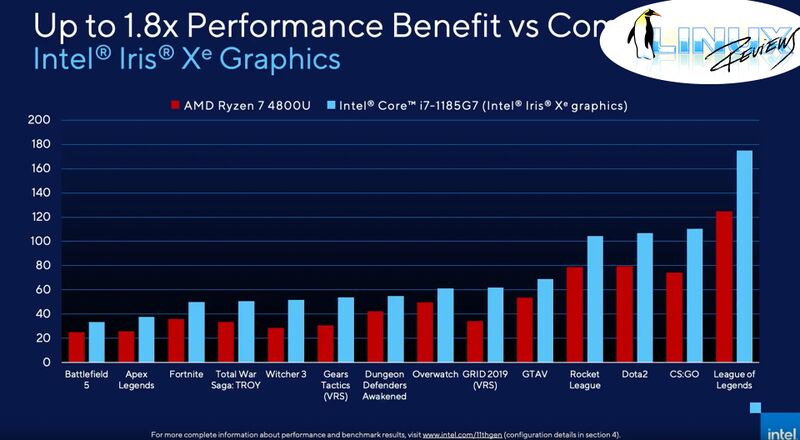 Intel marketing story is that their new Iris Xe graphics parts has gaming performance superior to the otherwise comparable AMD Ryzen 7 4700U processor.

Intel processors are not known for their amazing graphics performance. Their integrated graphics parts have never been good for more than desktop work, casual web browsing and video playback. Intel's story is that this has changed with the launch of their 11th generation Tiger Lake parts with gen12 Iris Xe graphics. Intel claims their top of the line 1185G7 IPU (Intel processing unit?), with 96 GPU execution units and a max GPU clock speed of 1.35 GHz, has 63% better graphics performance than the AMD Ryzen 7 4800U APU launched in January 2020. 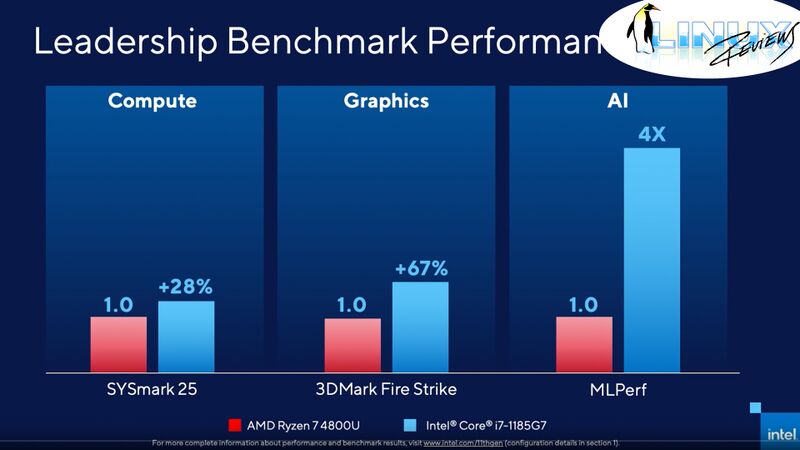 Intel is in a good position graphics-wise if their graphics performance claims hold water. Intel claims the i7-1185G7 is good for 110 FPS in CS:GO, 107 FPS in Dota and 104 FPS in Rocket League, all at at 1080p medium. Some of their other numbers are not quite that impressive. Their numbers claim it can do 39 FPS in PUBG at 1080p low, 33 FPS in Battlefield 5 at 1080p medium and 50 FPS in Fortnite at 1080p low. Intel claims the sub-60 fps numbers provide a "playable" experience.

The Iris Xe chips contain something Intel calls "Deep Learning Boost" (DL Boost) extensions which is likely why their MLPref (a AI benchmarking suite) numbers claim it is "4X" faster than the AMD Ryzen 7 4800U in that particular benchmark.

The Linux kernel has had support for Tiger Lake processors since Linux 5.4 was released in November 2019 so any Linux distribution should work fine with the new Tiger Lake laptops and notebooks when they become available in retail stores.

Intel's figures are almost certainly bullshit. I don't think so much emphasis should be put on a manufacturer's own benchmarks until there's a way to validate the results.

Remember the Principled Technologies benchmarks from 2018, where Intel compared itself to AMD chips? They used multiple tricks to handicap AMD. That was back when AMD wasn't even a serious competitor yet.