The Free Software Foundation has announced that it has "Respects Your Freedom" certified a re-branded Lite-On WN6503AH 802.11n half-mini PCIe card from 2010. The certification adds to a short list of wildly outdated, grossly overpriced, odd or obscure hardware. If you believe you will enjoy paying $51.5 for a white sticker saying a wildly outdated $7.5 Wifi card is RYF certified then the "Libiquity Wi-Fri ND2H Wi-Fi card" may be for you. 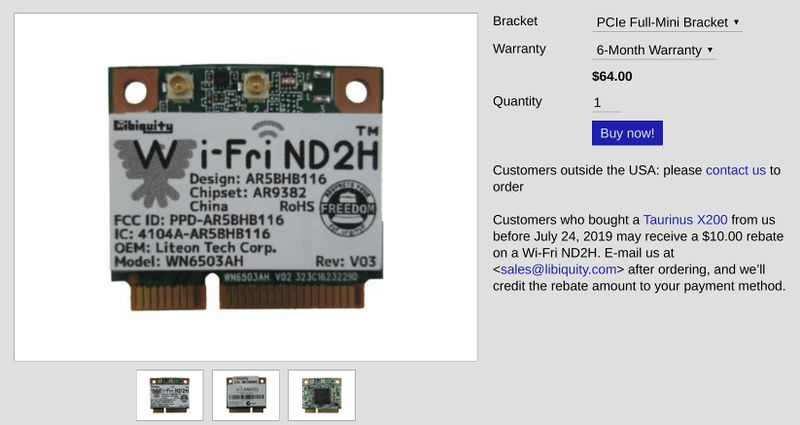 The FSF kicked off the year by giving the <$10 Lite-On WN6503AH Wifi card with a $50 sticker on it a Respects Your Freedom certification.

The Lite-On WN6503AH Wifi card the FSF certified is in their announcement called a "Libiquity Wi-Fri ND2H Wi-Fi card". It is really just an old re-branded Lite-On Wifi 4 card with the Atheros AR9382 chipset. The ath9k kernel driver has had support for AR9382 and other Atheros chipsets for almost a decade so the good news is that it will work out of the box on any machine. The bad news is that the "Libiquity" branded RYF certified version of this card will set you back $59 or $64 if you want a bracket.

Here's the laughable part: The Rebranded Lite-On WN6503AH gets a Respects Your Freedom certification because "The device does not ship with any software included". Libiquity did not replace any proprietary firmware with free firmware or do anything at all beyond slapping a sticker on the card before they sent it to the FSF for a certification. What you get if you pay Libiquity a hefty $60 is the very same outdated Lite-On WN6503AH 802.11n Wifi card from 2010 you get if you buy it elsewhere. The only difference between the Lite-On WN6503AH and the "Libiquity Wi-Fri ND2H Wi-Fi card" is a white sticker with some text on it. What's the price of that fine white sticker, you may wonder. Finding the answer was a simple matter of looking at the price of the same product without the sticker and doing the math. 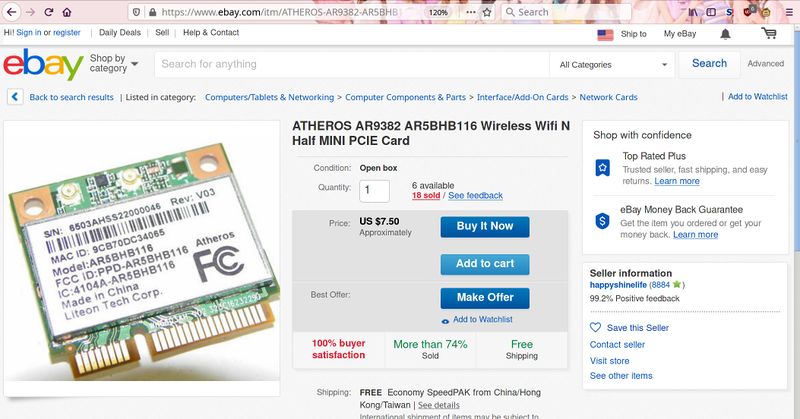 Several sellers on epray are selling the PCIe Wifi cards with the same Atheros AR9382 chipset for less than ten American dollars.