Two groups recently published two very different open letters about honorary Doctor Richard Stallman. One letter, written by free software users, voices support. The other letter, written by corporate-funded organizations lead by 白左 activists and bullies who do not even use free software themselves, demands that Richard Stallman is kept out of any and all leadership positions. The letter voicing support had nearly five thousand signers at the end of March, leading the disgraceful hate-letter by nearly two thousand signers. The numbers have since flipped, the letter against RMS is now leading by thousands of signers. 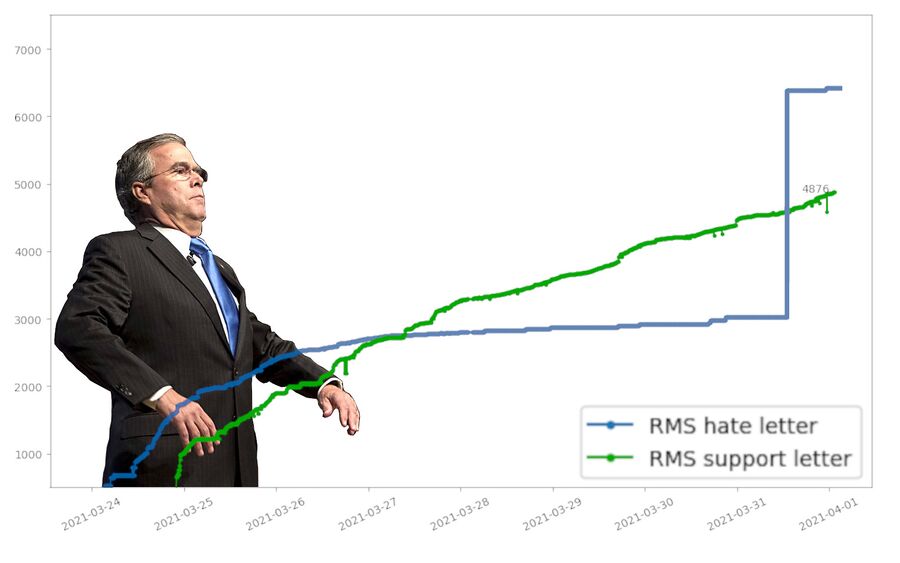 It seemed like love was winning over hate towards the end of March 2021. A letter written by free software users voicing support for Richard Stallman appeared to had gained a very solid lead over a very different vicious hateful letter filled with long-debunked lies, character assassinations and 白左 drivel which was written by GNOME Foundation Executive Director Neil McGovern with help from Joan Touzet, Elana Hashman and Molly de Blanc.

The count stood at 4899 signers voicing support for Stallman and 3082 signers participating in a cruel dark-ages style witch-hunt mob against an elderly man who spent his life fighting for and promoting free software.

It looked like Richard Stallman had overwhelming support. But looks can be deceiving. It turns out that many of those who are against Stallman had not been counted.

Molly de Blanc, who serves on the board of directors at the Open Source Initiative, discovered two suitcases full of mail-in signatures against Stallman under a table late Wednesday night. The suitcases were magically discovered after everyone else in the building, including legal observers, were told to go home. The suitcase-votes were enough give the Stallman hate mob a solid lead.

"I am pleased to have started a vicious bullying campaign against a 68 year old man with Asperger's that would have driven most people to suicide and I am equally pleased to see that there is so much support for cancel culture, online bullying campaigns and lynch mobs."

Other organizations such as the KDE e.v, The Tor Project, the EFF, The OBS foundation, Red Hat, SUSE, Mozilla and the Xorg Foundation have released similar statements.

The campaigns for both letters is still on-going and there is a chance that the RMS supporter could catch up, even with all the newly discovered mail-in ballots favoring the hate-letter. You can read the letter supporting Stallman and learn how to sign it if you like and enjoy free software at rms-support-letter.github.io.