All AMD APUs in CPU family 22 appear to be affected. Older chips like A8-7600 in family 21 do not have RDRAND (or RDSEED for that matter) and family 23 (Ryzen) does not have this problem. You can grep family /proc/cpuinfo to see what family CPU you have.

The problem for systemd users with these APUs

is that it uses RDRAND, if present, in the sd_id128_randomize function in src/libsystemd/sd-id128/sd-id128.c to generate UUIDs for services in versions 240 and onward. This fails after a suspend on affected AMD APUs since RDRAND is no longer returning random values. A workaround is to replace the line r = genuine_random_bytes(&t, sizeof t, RANDOM_ALLOW_RDRAND); with r = genuine_random_bytes(&t, sizeof t, 0); so RDRAND is no longer used. Another simple workaround is to simply not use suspend a hibernate to disk instead.

Lennart Poettering has proposed that systemd in future versions does a if (*ret == 0 || *ret == ULONG_MAX) check to filter out invalid results. This, if added, would permanently solve the issue for affected users.

If systemd should be blindly trusting the hardware by using RDRAND instead of a properly seeded PRNG is a question worth asking. 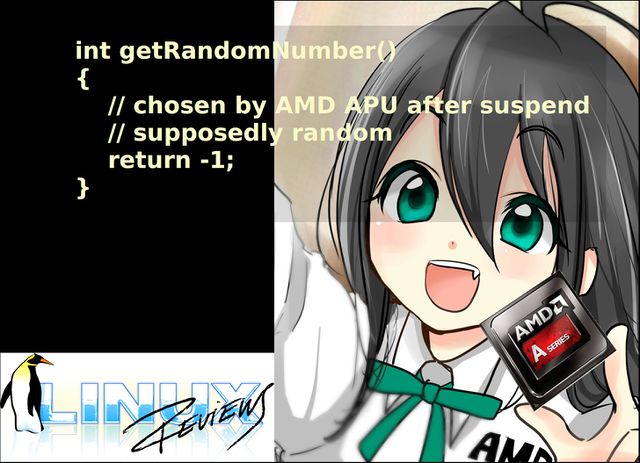 The failure of RDRAND to return random values is pretty bad and something which likely affects a lot more than systemd. In the systemd case it fails in a very noticeable and visible way. It would not be good if other critical pieces of software are happily accepting 0xFFFFFFFFFFFFFFFF as a random value and use it when RDRAND is called.

The good news for OpenSSL users is that this hardware bug in AMD APUs is actually been known and documented in RedHat bug #85911 since 2014. OpenSSLs solution was to simply not use RDRAND at all so the underlying problem's remained ignored and unsolved.

A kernel fix is needed

This is a hardware problem which should be worked around at the kernel level by either making RDRAND unavailable on these machines or by checking if it returns valid values after a suspend.