The Mozilla Corporation has laid off 70 employees, experienced programmers and senior engineers, due to business difficulties and declining revenue. A dwindling Firefox marketshare combined with a failure to make money on its subscription services has reduced Mozilla's revenue to the point where layoffs are necessary. 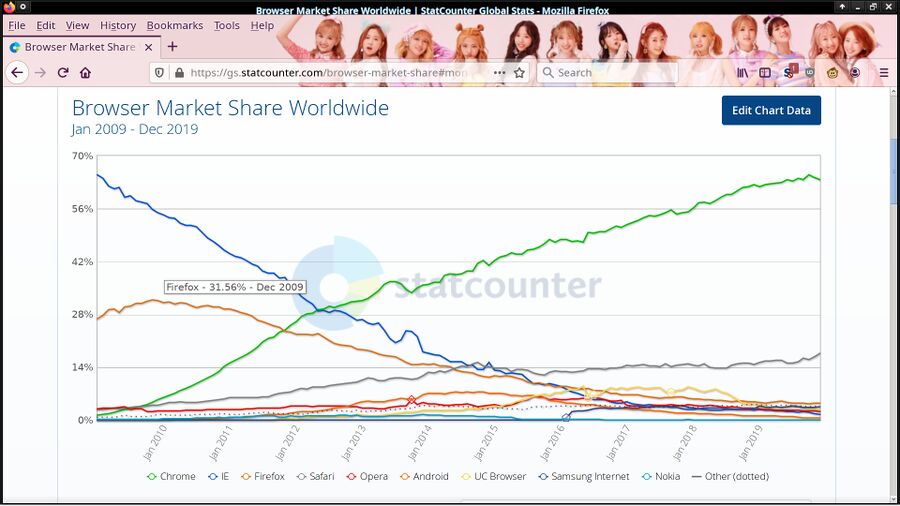 A screenshot of Firefox web browser version 72.0.1 showing a website with a graph of its dwindling marketshare.

The Mozilla Corporation, established in 2005, is a wholly owned subsidiary of the non-profit Mozilla Foundation. They are best known for the free software Firefox web browser.

An internal memo from Mozilla Corporation chairwoman and interim CEO Mitchell Baker states that their failure to generate income from sources other than search combined with declining revenue from search makes a workforce reduction necessary. She added that Mozilla had underestimated how long it would take to ship new revenue-generating products.

Google and other search engine partners pay Mozilla to have their search engines included in the Firefox web browser. Mozilla made $540 million from search engine "royalties" in 2017. That dropped to $430 million in 2018 according to a "Independent Auditors’ Report and Consolidated Financial Statement" from December 2018. Gradually fewer Firefox users over the last decade has significantly reduced that revenue steam. Tough competition from Google Chrome, a lack of focus on their core Firefox product and bizarre 白左 priorities are some of the factors that resulted in Mozilla's current situation.

Mozilla will likely be laying off more employees in its United Kingdom and France offices at a later date.

Sean Stangl, Senior Compiler Engineer at Mozilla since 2010, described the situation this way in a post at "Hacker News":

"I'm one of the 70. There were no signs that this was imminent, although Mozilla has been struggling financially for many years. I expected that it would happen eventually; I'm relatively well-prepared for it; and it's not too shocking. I did however expect that there would be some warning signs in the lead-up, but that was not the case.

I was working on Cranelift, the WebAssembly compiler that is also a plausible future backend for Rust debug mode. Before that, I worked on the SpiderMonkey JITs for 9 years. If anyone has need for a senior compiler engineer with 10 years of experience writing fast, parallel code, please do let me know."

Andreas Gal, a former chief technology officer at Mozilla who is currently working at Apple Inc, responded by offering Sean Stangl and others who lost their jobs at Mozilla new employment at Apple:

"Shoot me an email agal at apple. Also feel free to give my email to anyone else affected."

Mozilla's decision to fire senior programmers and engineers is strange and worrying. Mozilla is, at its core, a technology company. Skilled programmers are essential to making a web browser. A Head of Global Diversity & Inclusion is not. Mozilla fired programmers and employees like the head of global diversity & inclusion. Mozilla did not fire quite a few other non-programmers they could do without.

Brendan Eich, Mozilla founder and CEO until he was bullied out in 2014, had this to say about the current state of Mozilla in a post on "Hacker News" on January 18th, 2020:

"Google is a monopoly now and has tied its browser to its other products to take over adjacent markets, or buy other companies that pioneered such markets. Mozilla depends on Google for most of its revenue, and on a declining (traffic) basis. Reality requires acknowledging my and others work on Mozilla but not dying on that nostalgic hill. Especially not with such arrant mismanagement as is going on there now."

Brendan Eich is currently the CEO of Brave, the company behind the competing Brave Web Browser.

Mozilla is hoping new subscription-based products will make up for their web browser's dwindling popularity. One of their bigger bets is a subscription-based VPN service that will cost $4.99 per month. We hope that work out for them even though we doubt there is much to be had by entering another already-saturated market. Google has essentially become a monopoly when it comes to web browser technology, search and online advertising. Mozilla provides an alternative web browser which is not just Google's Chromium with some addons on top. Edge, Vivaldi, Brave and most other "alternatives" to Google Chrome are all built on the Google-controlled Chromium code-base. Mozilla Firefox has its own Gecko rendering engine. We do not want to see Mozilla bringing Firefox and Gecko development to a grinding halt by firing even more skilled programmers.