Krita 5.0 Will Have A Built-In Screen Recorder

It has been one and a half years since Shi Yan first submitted a series of patches implementing screen recorder functionality. Those patches have finally been merged into Krita's master source tree. Krita 5.0 will have the ability to create neat time-lapse videos of drawings done in Krita by capturing canvas snapshots when it has been drawn on and the pen has been down for at minimum of two seconds. 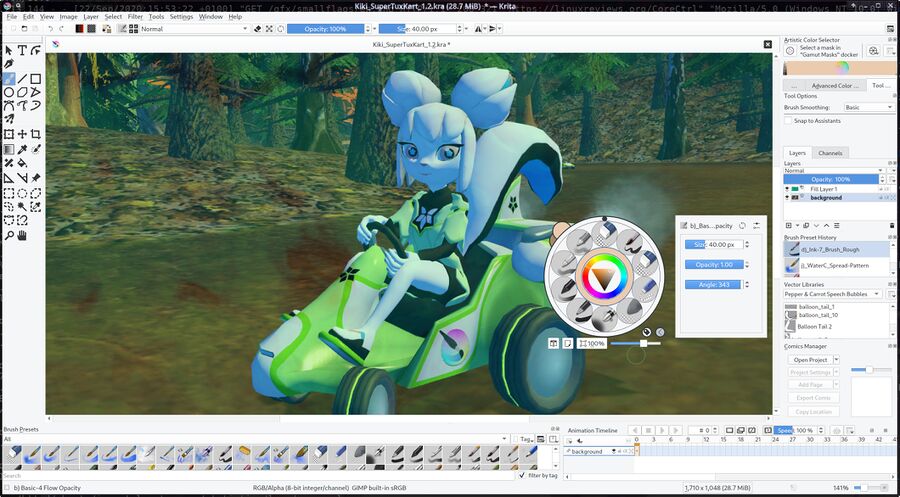 Artists who want to create time-lapse videos of their drawings being created in Krita can already do so using standard screen recording programs like OBS Studio. Those programs will record everything, all the time, resulting in very large video files.

Krita 5.0 will have a new built-in screen recorder for time-lapse videos, written by Shi Yan, that intelligently saves changes to the canvas. It will record an image if you have actually drawn something and rested your pen for two seconds. This ensures that the video recording, encoded using VP9, contains nothing but frames with actual changes to the canvas.

Developer Shi Yan has a website with a currently expired Let's Encrypt HTTPS certificate at epiphany.pub/@shi-yan. Just ignore the warning that it's somehow "insecure" if you click that link, it's fine.

Krita 5.0 will not be released for quite some time so you will have to wait a while before you get access to this if you are a casual Krita user. There is a download page with "nightly" builds available for those who don't mind using pre-release software with potential bugs.

The Krita team is, in parallel, improving the stable Krita 4.x branch. They released the first 4.4.0 beta today. That version does not have the fancy new screen recorder but it does have dynamic SeExpr expression fill layer support contribued by Amy Spark as part of the Krita Google Summer Of Code program. There's also a rather long list of bug-fixes since 4.3.0. You can check the Krita 4.4.0 Release Notes if you want to see what bugs are fixed and what other new features will be coming to Krita 4.4.0.

Krita is available for Linux, Windows, macoS and *BSD. The homepage is at krita.org.