Mozilla, the company behind Firefox, has intentionally made it somewhere between hard and impossible to stop recent Firefox versions from nagging you about updates on a regular basis. That is you use the Beta or Nightly channels. It used to be possible to disable the nagging using in-browser configurable settings, but Mozilla decided that it gave Firefox users too much control so they took it away. Luckily, there is another lesser-know way Linux users can use to make Firefox stop nagging about updates and other lunacy. 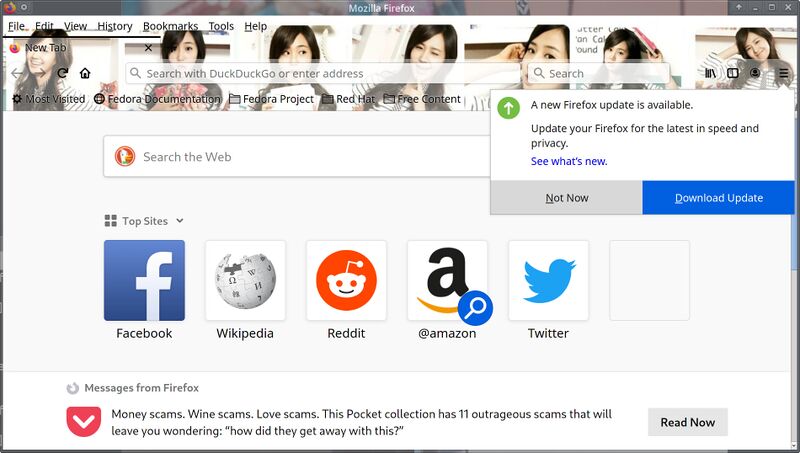 Most of the Linux distributions ship a customized Firefox version that won't nag about updates all day long. That is not the case if you download and install the Linux version of Firefox from Mozilla's website. That build will nag about updates regularly. The beta and nightly builds are even more annoying, they will basically nag you about some minor update half the time you sit down in front of your computer.

The obvious question is: Why not uninstall Firefox and use NAVER whale, Chromium, or even Google Chrome instead of that bloated always-nagging Firefox browser full of telemetery, useless features like "Pocket" and other things nobody wants? Well, you can, and probably should. However, if you really want to use Firefox for some reason and you want to get rid of that nagging then you may find yourself going down one very deep rabbit-hole.

A lot of older web pages will tell you that you can disable automatic updates by changing the value of app.update.enabled to false in about:config or a user.js file in the Firefox profile directory. That was too convenient for regular end-users so Mozilla removed it's functionality in Firefox 63. There used to be several other preferences you could use, like app.update.auto, but that was a far too easy way to stop Firefox from trying to update when you're on a expensive shoe-string wireless Internet connection in a cabin somewhere so Mozilla disabled that too. They then introduced a small pop-up asking users to update instead of respecting their users wishes.

Several websites claim that the "Update your Firefox to the latest in speed and privacy" nag-box can be disabled by setting app.update.doorhanger to false. That was true for a while, but it gave Firefox users too much control so Mozilla disabled that option.

It is interesting to note that most of the previously useful configurations keys like app.update.enabled, app.update.auto and app.update.doorhanger still exist, they just don't do anything anymore.

There is currently no way to disable the regular annoying "A new Firefox update is available" using regular Firefox settings.

There is, however, one loophole GNU/Linux users can and should use: "Enterprise Settings".

The trick is to make a folder named /etc/firefox/policies/ with a file called policies.json in it. That file can look something like this:

You may notice that a enterprise policy file does not look anything like the user.js file many Firefox users have painstakingly created and placed in their Firefox profile directory just to have Firefox intentionally ignore most of what is in it:

None of the above settings are relevant as of Mozilla Firefox 88. However, there are some settings that you will probably want to have in a user.js (you can also set them in about:config if you prefer:

You will want gfx.x11-egl.force-enabled when Mozilla Firefox 88 is released in a few days. Mozilla will be force-enabling their new Webrender renderer upon all their users and it is horribly slow out-of-the-box on Linux. gfx.x11-egl.force-enabled makes a lot faster, Firefox's performance is almost in the same ball-park as Chromium-based web browsers when Webrender is using EGL instead of whatever utterly slow pipeline it uses by default.

Normandy is Mozilla's way of saying backdoor add-on programs that are silently installed in your browser. They refer to those programs as "studies". Setting app.normandy.enabled to false used to disable that "functionality" and it may or may not still do that.

The only sure way to change how Firefox behaves is to use the enterprise policy framework. Firefox seems to care about large corporate customers. They clearly do not care about regular people, the Mozilla corporation has demonstrated that time and time again. They even participate in vicious online bullying campaigns against elderly individuals who are singled out for being slightly different these days. 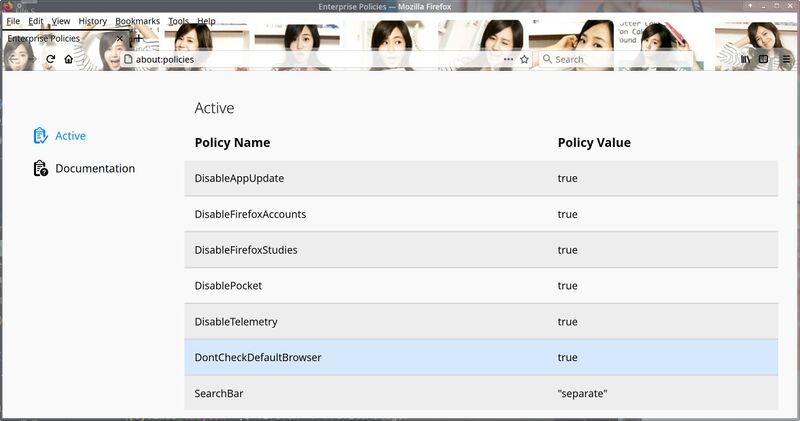 You should create a /etc/firefox/policies/policies.json file using the example above and restart Firefox (type about:restartRequired into the address box) and then, once it restarts, type about:policies into the address bar. The special about:policies page will either tell you "The Enterprise Policies service is inactive" or show a list of active policies. Those policies are, unlike regular user settings, actually honored. The special policy page has a Documentation section where you can see all the special keys that are available.

ManualAppUpdateOnly is an alternative to DisableAppUpdate if you want to:

"Allow manual updates only and do not notify the user about updates."

Manual updates can be done by going to Help ▸ About Firefox if the ManualAppUpdateOnly policy is set. There is no Tools ▸ Update menu item or anything similar since that would be too user-friendly and make sense, and Mozilla seems to prefer that everyone is forced to update when they, not grown individuals using their products, decide. If will of course not work if you have two Firefox instances with different profiles, Firefox will just lie and say "Firefox is being updated by another instance" (even when it's not, having two profiles open is enough to prevent updates) in that narrow specialized case. 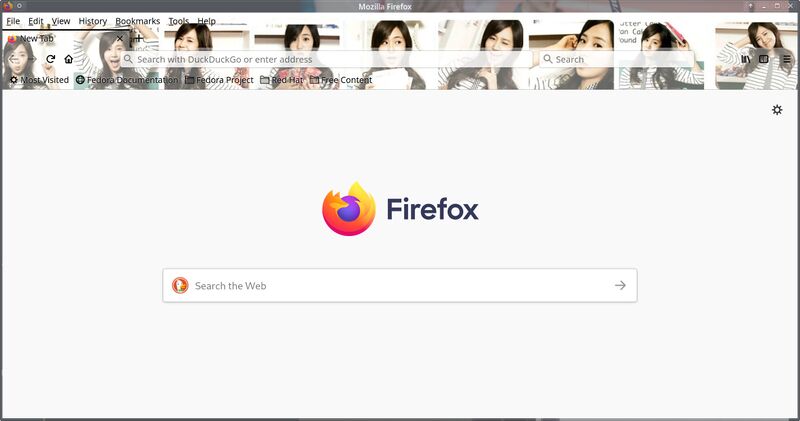 A new "Firefox Home" tab with nothing but a Firefox logo and a search bar thanks to a "Enterprise" policy. The Messages from Firefox and the sponsored Top sites and all that useless garbage is gone.

Firefox "enterprise" policies" allow you to do configure a lot of the things used to be possible with settings in about:config or a user.js and there are several useful options that are available as "enterprise" policies" that were never available anywhere else. You can, for example, customize the "Firefox Home" page Mozilla Firefox defaults to in new pages and new tabs with a FirefoxHome policy:

A good enterprise policy for Firefox is something you should make if you still use Firefox as web browser for some reason. They are removing more and more end-user control with each new release. The "enterprise" policies seem to be the only way left around that. The only downside to this method is that you have to have root access which is kind of a problem if you are using a "administered" machine borrowed from your empolyer. The good news is that you can be your own little global "enterprise" in Mozilla's eyes if you can prove it by placing some contents in /etc/firefox/policies/policies.json.

7 months ago
Score 1
Thank you so much for this article! I have been struggling with this for a long time. I am hoping this this will be the end of the restart required crap! I am going to do this on all my machines now!

7 months ago
Score 0
Oh, this is FANTASTIC, thank you! Total lifesaver. This worked with Firefox 88.0.1 under macOS 10.13.6. Updates, specifically UI changes, bother me so much I swear I need therapy for it. I hopped on this morning to find Firefox auto-updated itself, and WOAH. The layout looked so unbelievably bad. Thank god I had a Time Machine backup made a few days prior and reverted back the .app along with "~/Library/Application Support/Firefox" and "~/Library/Caches/Mozilla/updates/Applications/Firefox", which brought me back to where I was before. I created this .json file and can now allow my blood pressure to drop back down to normal levels.

6 months ago
Score 0
Hi, small update from Anonymous (b5d9cdfddc) again. As I use both Winblows and macOS, I found that under macOS, the policies.json needs to be placed under "/Applications/Firefox.app/Contents/Resources/distribution" to take effect, and under Windows it needs to be in "C:\Program Files\Mozilla Firefox\distribution" - adjust your paths accordingly.

"distribution" folder must be created within Firefox installation directory with the same policies.json

5 months ago
Score 0
the easiest way is to uninstall firefox. with chrome i find all other browsers redundant.

Chrome is rubbish produced by an evil company hell bent on world domination.

Don't be evil - give google the flick, you know they deserve it.
Permalink
You are ignoring the author of this comment
Show comment | Manage ignore list

3 months ago
Score 0
For any real Noobs like me that couldn't get it working at first; Don't just create a tx document and rename it to .json instead open notepad and on a blank notepade save as and change to all then put .json

2 months ago
Score 0
That is great so long as you don't mind inviting Google into every aspect of your life, keeping a permanent database of everything you do, profiling all your interests/hobbies/religious beliefs/political leanings, using algorithms to maintain a psychological profile on you, etc.

2 months ago
Score 0
@Anonymous (40556fe90b): Chrome is great so long as you don't mind inviting Google into every aspect of your life, keeping a permanent database of everything you do, profiling all your interests/hobbies/religious beliefs/political leanings, using algorithms to maintain a psychological profile on you, etc.

one month ago
Score 0
30-year data scientist (DB wrangling, API finessing, attention-capture algo dissecting...) here -- DARPA's greatest invention (the web) and Google's billion$ haven't happened without user consent. Every packet on the web, PGP-encrypted/otherwise or not, has been parsed and spidered since long before folks first started chatting on "CB Simulator" on CompuServe in the early 1980's. Every single bit of traffic is stored in massive DB's both Government and otherwise. To think that all your traffic and communication ISN'T run through hugely complex algo's, regardless of the "entity" doing so, is to ignore any mileage on who created the web in the first place. The only way to avoid this is to unplug. Cheers. ☻