Gentoo Linux is a source-based distributions for ricers who want to compile and piece together their own custom Linux distribution instead of submitting to some central authority's views on how things should be compiled and packaged. Gentoo Linux was first released on July 26th, 2020. Pre-compiled binary kernel packages are now, after more than 20 years, available to Gentoo Linux users who want to cheat and fetch a ready-to-use binary Linux kernels instead of compiling them like real women do. 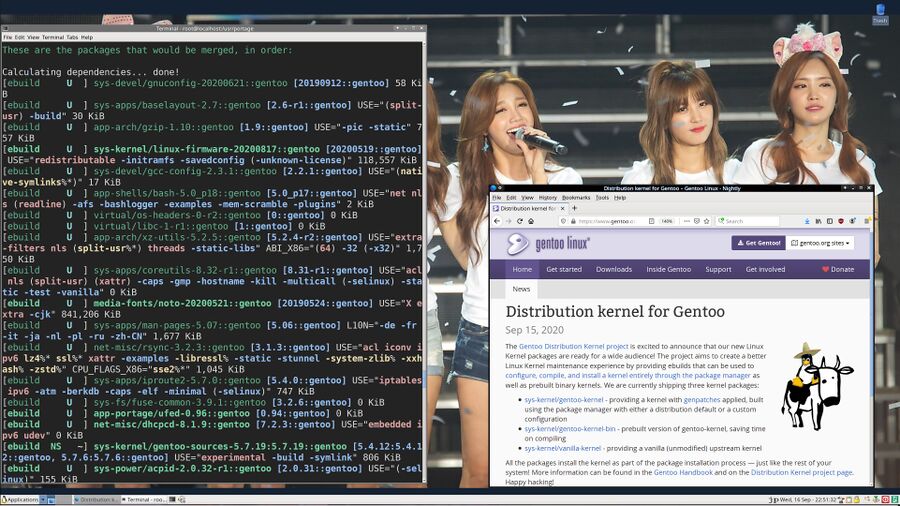 Gentoo Linux with the Xfce 4.14 desktop environment and a terminal showing packages scheduled to be compiled.

Gentoo Linux has long offered a very wide variety of Linux kernels to those who want to configure and compile their own kernel using Gentoo's fine genkernel utility. The Gentoo Distribution Kernel project "is excited" to announce an additional option: sys-kernel/gentoo-kernel-bin which, as the name -bin implies, is a pre-built binary Gentoo kernel.

Those who prefer to go the real-woman route and compile their own kernel can still use either the officially supported sys-kernel/gentoo-kernel with lots of interesting and useful patches provided by the Gentoo Linux project or the plain sys-kernel/vanilla-kernel package containing the plain vanilla upstream Linux kernel.

There are also a ton of less-supported kernel variants in the Gentoo Linux portage package repository, including pf-sources, raspberrypi-sources, rt-sources (has CONFIG_PREEMPT_RT patch) and zen-sources.

The sys-kernel/gentoo-kernel may be of interest to anyone, including non-Gentoo users, who enjoy compiling their own kernels. A trick that is used with high success by the free software power e1it3 is to fetch the "experimental" genpatches package and use that to patch plain dull vanilla kernels from www.kernel.org. The archives containing those patches are usually named genpatches-${kernelversion}-1.experimental.tar.xz. You can usually point wget at a Gentoo Linux mirror like https://mirror.yandex.ru/gentoo-distfiles/distfiles/ and add that to aquire the patches. The command you would want for 5.8 series kernels would be:

That tarball contains 5012_enable-cpu-optimizations-for-gcc91.patch and 5013_enable-cpu-optimizations-for-gcc10.patch which, once applied to a vanilla kernel, allow you to compile the Linux kernel using all the native CPU instructions on the CPU you are using, not just the common ones a regular kernel will utilize. The gigantic placebo performance increase this will give you is far beyond rational measurement.

Compiling your own kernel using the Gentoo native CPU optimizations patch will not give you the full Gentoo Linux experience, but it will bring you one small step closer to Gentoo's riced Linux experience.

You can get Gentoo Linux installation images, and read the handbook required to actually install it, at gentoo.org.