The latest version of the Avidemux video editor/converter for Linux, Windows and macOS has tons of new video filters, basic HDR support when working with Matroska and WebM containers, 24-bit uncompressed audio support in several file formats and a lot more.

Avidemux 2.7.8 with the Color Effect filter new to this release. The artist in both the edited video and the wallpaper is Gyongree from 9Muses.

Avidemux is a simple non-linear video editor most suitable for converting between file formats and quick edits to a single video file. It is not a fully featured video editor like kdenlive and DaVinci Resolve, but it can be used to remove black borders, cut a section out of a longer video file, apply filters and those kinds of things.

The latest 2.7.8 release has a long list of improvements: 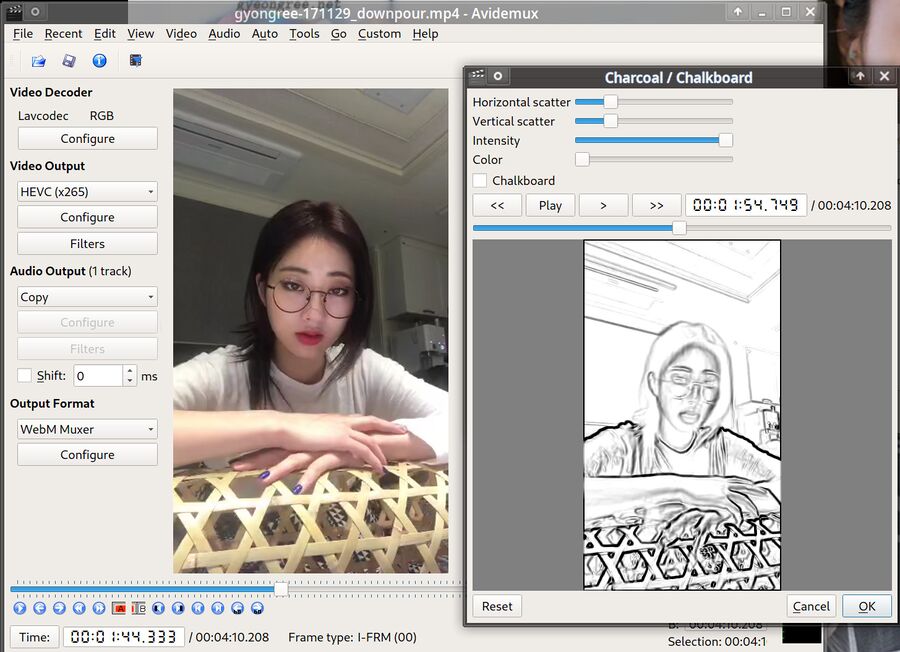 The new Charcoal filter in Avidemux 2.7.8. kdenlive has had a similar filter for years and years.

The avidemux homepage at fixounet.free.fr/avidemux/ as not been updated since forever. The latest release listed there is 2.7.6. Actual releases are now pushed to the projects github releases page where you will only find source code for both version 2.7.7 and the latest 2.7.8 release. Those source code tarballs do not contain any instructions for compiling the thing, there's not even a hint. There are several bash scripts in there such as bootStrap.bash, makeAppImage.sh, createDebFromSourceUbuntu.bash and createRpmFromSourceFedora.bash. None of those work, they are either tested on just one GNU/Linux distribution or not at all.

There are working binary releases available at avidemux.org/nightly/. Usable AppImage binaries that should work on the vast majority of GNU/Linux distributions can be acquired from the /nightly/appImage4/ folder. The nightly builds have dates, not version numbers. The latest as of today, from 210306, will give you Avidemux 2.7.8. There's also an alternative folder for very old GNU/Linux distributions like Debian Buster called /nightly/appImage4Buster/.

Avidemux is available as a Flatpak over at flathub.org/apps/details/org.avidemux.Avidemux but it has not yet been updated, you will currently get the older 2.7.6 version if you install it from there.