The latest version of the GNU GPL v3 licensed multiple digital currency miner XMRig adds one tiny fix for the assembly code used to mine uPlexa curency on the CPU. XMRig 6.12.0, released less than a week ago, added support for mining the uPlexa (UPX) currency on CPUs and GPUs, optimizations for the RandomX algorithm and a fix for showing the total hashrate correctly when it is compiled without OpenCL support. 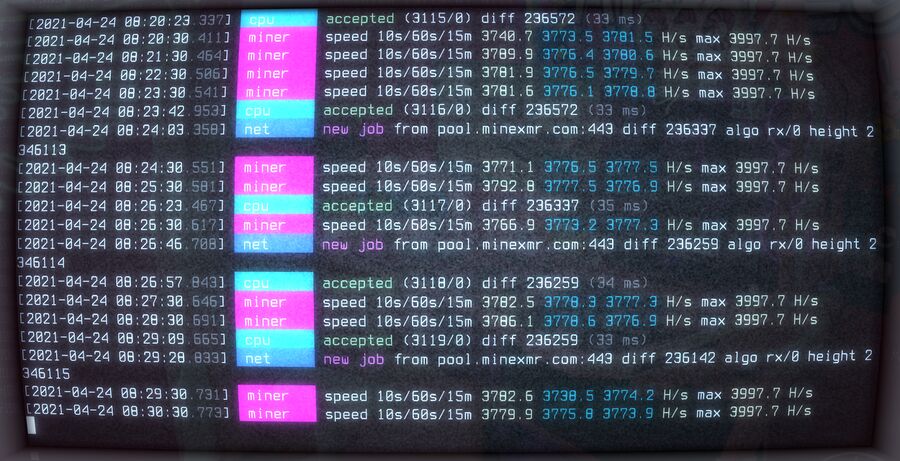 XMRig is a versatile little program for mining a wide range of digital currencies using either a computers processor or graphics card or both. The name XMRig makes it sound a bit like it just for the Monero XMR currency. That's not the case, it supports mining a rather long list of other mostly lesser-known digital currency algorithms using either a machines CPU or machines GPU using either the open OpenCL API or the proprietary CUDA API from Nvidia.

The uPlexa project has offered their own custom XMRig fork with support for the "Uplexa mining algorithm" for several years. That fork is no longer needed now that support has been merged into the standard XMRig utility.

XMRig 6.12.1 adds one tiny fix for the Zen3-specific assembly code used in the uPlexa CPU mining code on Zen3 processors.

The uPlexa is available to Linux users at uplexa.com/wallets in the form of a tar.bz2 appimage with an AppImage ("Wallet ElectraLight 0.2.0.AppImage") that immediately crashes with a Segmentation fault upon launch.

XMRig 6.12+ does not support GPU mining using the standard Mesa Clover 1.1 OpenCL implementation GNU/Linux distributions ship with. All you get is opencl disabled (no suitable configuration found) if you try it with that OpenCL implementation. Those of you with AMD graphics cards can install the AMD Radeon Open Compute (ROCm) OpenCL 2.0 implementation, it does work with that one. 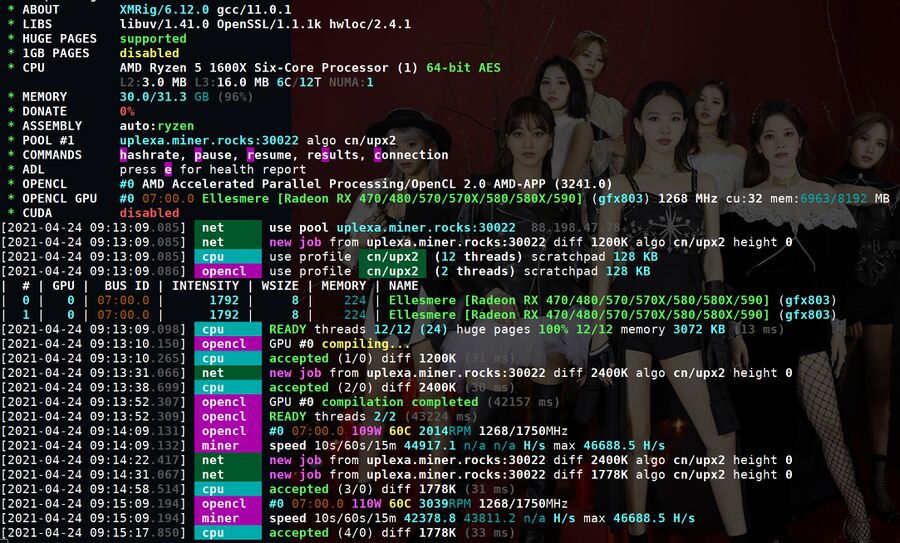 XMRig mining uPlexa UPX-currency on both a CPU and a AMD graphics card using the Radeon Open Compute OpenCL implementation.

The trick to GPU-mining on AMD cards with Radeon Open Compute, once you have that installed, is to see what "GPU" ROCm is shown as (Clover will be shown as one, ROCm as another, if you have both implementations installed). That can be done with:

The right OpenCL "device" (implementation) can then be selected with --opencl-devices=N where N would be the right device. You will also need to choose a mining pool and get a uPlexa wallet address since all the mining pools seem to require that you use a wallet address as a pool username (-u). We absolutely do not recommend signing up at wallet.uplexa.com to get a web wallet since web wallets are inherently untrustworthy, but it is an option if you just want to test how XMRig GPU-mining works.

XMRig will mine using the CPU, in addition to any GPU, unless --no-cpu tells it not to.

--opencl-devices=0 in the example above tells it to use device 0, it does not tell it to use zero GPU devices.

Mining uPlexa UPX currency using the GPU is, according to our brief tests, a complete waste of electricity. It is really inefficient compared to pure CPU-mining. You can use both at the same time, but you don't gain all that much compared to the additional electricity used by comparably inefficient GPU mining.

The uPlexa CPU mining implementation added to XMRig 6.12, released four days ago, wasn't perfect. It has a bug that causes some occasional invalid shares on Zen 3 processors. That bug is fixed in today's XMRig 6.12.1 release.

Support for mining uPlexa was not the only high-light in XMRig 6.12. The RandomX algorithm got optimized to take advantage of the IMUL_RCP instruction on modern CPUs. That results in a 0.3-0.4% hash rate gain on AMD Zen processors and a 0.1-0.3% gain on Intel processors. It also fixed a long-standing issue where XMRig would sometimes have issues showing the right hash rate if it was compiled without OpenCL support (it didn't matter if OpenCL was used or not, it worked fine as long as support was OpenCL compiled into it).

You can acquire the latest XMRig software from github.com/xmrig/xmrig/releases if you want to get into crypto currency mining on a CPU or GPU. You may or may not want to look at src/donate.h if you want to be able to set the donation-level for the XMRig developers to zero. You may also want to check electricity prices in your area and your hardware's efficiency on the coin you want to mine. It, as an example, pointless to CPU-mine Monero with XMRig unless you have a fairly modern CPU with a large cache.