Monero is a decentralized payment network with a digital currency (XMR). It provides a very high degree of user privacy. It has a obfuscated blockchain which makes it very hard to tell the source, destination or amount of any given transaction.

New Monero currency is generated using a proof of work mining algorithm. The algorithm used to provide proof of work has changed several times. It is currently mined using the randomX algorithm.

The Monero network daemon and the Monero wallet GUI are free software under the The 3-clause BSD license.

XMR As A Payment System

Monero has very low transaction fees in comparison to other digital payment network. They are low enough to make it practically usable as currency (unlike Bitcoin and Ethereum).

XMR As A Financial Instrument

Monero does not have a cap on how many XMR tokens can be printed. This makes it less attractive as a speculative instrument than fixed capped digital "currencies" such as Bitcoin.

Monero has not gained much popularity among online retail stores since it was released on April 18th, 2014. It has gained some limited popularity on dark net web stores due to the built-in privacy properties that are very attractive amount a certain type of merchants.

A limited number of the larger crypto currency exchanges like Bitfinex, Kraken and Bittrex have Monero XMR currency pairs. Most larger notable exchanges such as Bitstamp and Coinbase do not have any XMR pairs available for trading. 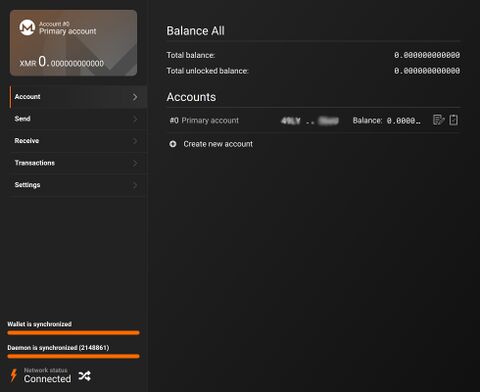 The Monero the wallet is pretty easy to use once you have it installed. It does take some time from the time you start it to the time it is ready to be used. This is because starts a separate network program called monerod, the monero daemon, in the background. It is what connects to the network and does the heavier lifting.

The Monero Wallet GUI offers a pretty easy to use interface. The left side will have your Account with an overview of your Primary, and optionally, secondary accounts. There is also Send, Receive, Transactions and Settings.

The Receive tab lets you create addresses other people can send to. A QR-Code will be shown for selected addressed. This QR-Code can be saved as an image if you want to send it to someone or place it on a web page.

The wallet GUI is overall very easy to use if you want to send and receive digital Monero XMR currency.

The graphical Monero wallet, available from web.getmonero.org/downloads/, allows you to store, receive and send Monero XMR currency. It is quite easy to use. The file offered for GNU/Linux includes a statically compiled Monero daemon binary called monerod and an AppImage binary called monero-wallet-gui. These are the only files from the archive you need to use the wallet. You can copy monerod and monero-wallet-gui from the wallet gui archive to a place in your system $PATH such as $HOME/bin or /usr/local/bin to make the binaries you need to run the wallet available. The monerod will be started by the wallet when it is executed and stopped when it is closed.

This is because the wallet GUI is a Qt application capable of scaling to the right size on high resolution monitors. It will only do that if a QT_AUTO_SCREEN_SCALE_FACTOR environment variable is set to 1. That variable will likely be unset; you can open a terminal and echo $QT_AUTO_SCREEN_SCALE_FACTOR to see if your the desktop environment and/or GNU/Linux distributions gives it a value.

You will likely also want to change the icon defined in the monero-gui.desktop file. The wallet gui archive does not include an icon file. Only a few themes like the Papirus theme and the classic-kde-remixed themes come with an icon that is actually named monero. Icons like format-currency (most KDE focused themes have it) or accessories-calculator may be preferable if Icon=monero results in no icon or a default icon on your system.

The XMRig mining program is the best option for mining Monero XMR currency on GNU/Linux machines. It is also available for other platforms like Windows and macOS.

The randomX algorithm Monero uses does not benefit from GPU mining. It can be done but the cost per hash is higher than the cost of mining using a CPU. The GPU mining code in XMRig is geared towards CUDA mining on NVidia graphics cards and the proprietary AMD graphics driver for Windows. It does not work with the AMD ROCm OpenCL driver which is otherwise the best option for doing OpenCL on AMD graphics cards.

The official website is at web.getmonero.org. That site has a blog where new releases are announced.

The Monero software can be acquired from web.getmonero.org/downloads.

The software is developed on GitHub at github.com/monero-project/monero-gui.