Chromium is the fastest web browser on Linux when it comes to everything and anything graphics-intensive. Is is not that clear-cut when it comes to overall performance and real-world use. What is clear is that both Firefox and Chromium appear to get slower with each new release and that is specially true if they are running on Intel hardware.

All test were done using Linux kernel 5.2 and Mesa 19.0.8. The browsers were tested on a typical desktop with a AMD CPU and a AMD GPU and a typical laptop with a Intel CPU using it's integrated graphics capabilities. The Firefox Nightly version used to test identifies itself as Firefox 70.0a1.

The tests were done using clean profiles with no browser extensions. The only setting that was changes was Webrender on Firefox to see how it compares to the default "Basic" rendering. 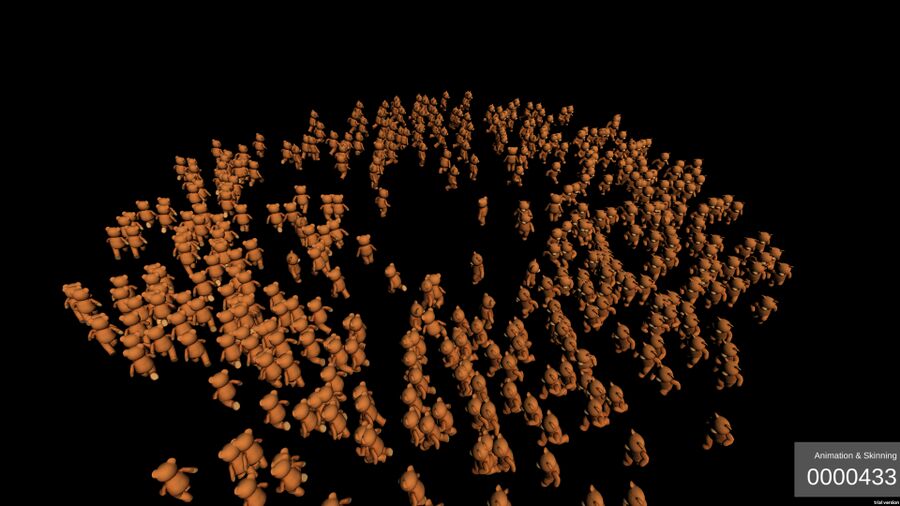 The 2018 Unity Web Browser benchmark, which you can try using this link, is a almost pure graphics test. This test is reflective of the performance you can expect playing web browser games and not much else.

Chromium is by far the clear winner of this test on AMD machines with AMD GPUs. One odd detail is that Chromium 75.x appears to be slower than the two previous versions.

Firefox's new rendering technology WebRender, which is for now disabled on Linux systems, does not appear to make Firefox better. Actually, it makes it perform worse on the newly released Firefox 68. This new rendering engine can be enabled by typing about:config in Firefox's address bar to get to the secret advanced configuration options. The key gfx.webrender.enabled can be set to true to enable it. Typing about:support in Firefox's address bar will show all kinds of incriminating information about it and your machine. There is a graphics section there were you can see what kind of rendering is being used. Enabling it on Firefox 68 is clearly a bad idea. However, a close-up inspection of the numbers reveals that WebRender is marginally faster on Firefox Nightly on this specific system.

Firefox 68 using the "Basic" rendering system is a lot faster than Firefox 66 with both basic and webrender on this system. 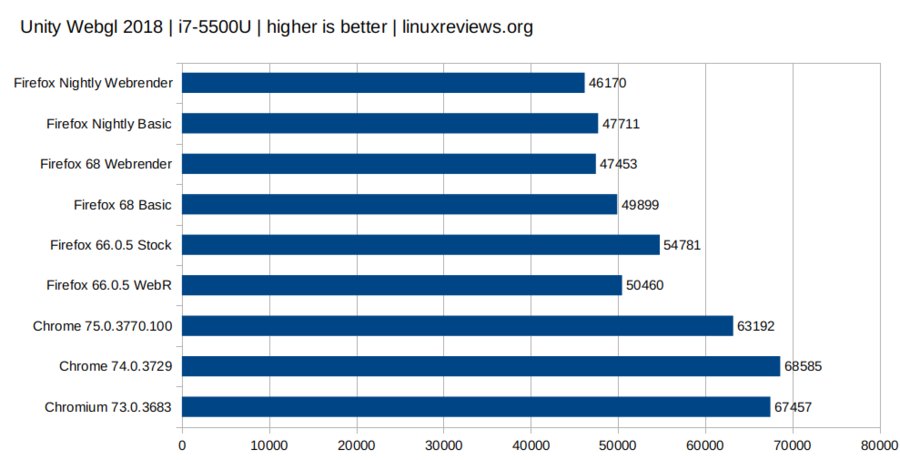 Chromium is the clear winner on Intel too. The latest Chromium 75 is slower than the previous versions on this machine as well.

One interesting difference between the AMD results and the Intel results is that Firefox Nightly is slower when using WebRender on this machine. It is slower on Firefox 68 on both test systems. Nightly was slightly faster on AMD when WebRender was turned on, that is not the case on the Intel machine.

It is noteworthy that Firefox 68 is much slower than Firefox 66 when using both rendering options on the Intel-powered laptop and Nightly has lowest scores. This differs from the AMD system where Firefox 68 is faster and Nightly is fastest.

We did not run any more tests using Firefox's WebRender rendering engine since it appears to lower performance in a big way in all cases with Nightly on AMD being the one and only exception.

JetStream 2, which is available at the website https://browserbench.org/JetStream/, is a purely synthetic benchmark. It tests a large number of JavaScript and WebAssembly operations. It does of course say something about a browsers ability to do specific operations and the numbers this test produces are useful for comparing browsers against each others. However, these scores are not really that reflective of real-world performance.

Chromium wins over Firefox in the JetStream 2 number-crunching benchmark. However, Chromium 75's performance stands out as being noteworthy worse than Chromium 74 on both test-systems. It is also interesting to note that Firefox 68 is faster than both Firefox Nightly and Firefox 66 on both machines.

One not very visible or immediately noticeable takeaway from this test is the lack of difference between the test systems using both browsers.. The i7-5500U is a slow chip compared to the AMD Ryzen 2600. The i7-5500U is a two core/four thread part. The Ryzen is a six core twelve thread part. The hardware is vastly different yet the browser performance is almost identical.

Basemark 3 is a rather long and comprehensive tests which reflects real-world performance better than the synthetic tests above. You can try it and see what it does at http://web.basemark.com/ - do note that it is a very long test which takes ages.

Chromium is the clear winner of this test - by a much lower margin in version 75 compared to Chromium 74. It's getting slower.

The Firefox Nightly score in this test is a bit odd. Nightly is the fastest Firefox version on the AMD system yet it is significantly slower on the Intel laptop.

Webxprt3 is another benchmark which aims to reflect real-world performance. It is made by the almost wholly Intel-funded "independent" Intel-front Principledtechnologies. It is a comprehensive test with many aspects, some of which are strange. Why they are testing a web browsers ability to do things like OCR is a good question. Still, it is a good test which reflects real-world browser performance. You can try this Intel-front's test at http://www.principledtechnologies.com/benchmarkxprt/webxprt/

Principledtechnologies's test appear to favor Firefox which is, in this particular test, getting slower and slower with each version. Chromium 75's score is lower here too compared to earlier versions of this browser.

Webxprt3 is the only test where Firefox absolutely crushes Chromium.

Chromium is the clear winner when graphics is involved. It wins all the tests expect for the Webxprt3 test by a wide margin. Why this is the case is a good question. We have no idea, it is somewhat of a mystery. Webxprt3 does not have any graphics rendering tests and that does help Firefox's score. However, the purely synthetic Jetstream 2 test does not test graphics elements and Chromium wins that test hands down.

Webxprt3 stands out in another curious way: It is the only tests where browser performance appears to get increasingly worse with each new browser version. Firefox 68 is faster than Firefox 66 in all the other tests - except that one.

It is difficult to draw and concrete conclusions from the browser test data. It is somewhat all over the place. Chromium seems to be the clear winner if you want to run WebGL applications or play games. The difference between the browsers and the versions is not that clear when it comes to regular web browsing.