Valve is dropping support for Steam on Ubuntu

Ubuntu's decision to drop support for 32-bit programs and platforms is a non-issue for free software since all properly written free software can easily be compiled on a variety of platforms. Proprietary games and game launchers lack the same flexibility. Ubuntu's decision to drop the legacy 32-bit multi-lib cruft is therefore a huge problem for Steam. 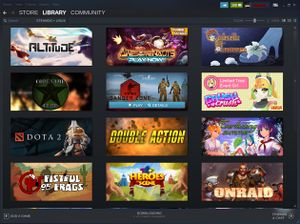 Ubuntu is currently the "officially supported" Steam platform. Steam works just fine on Fedora, Manjaro and a lot of other distributions without that "official" support. It really does not mean much since there's not much actual support to be had regardless of what platform you use. "Supported" means Valve does some internal testing against the distribution and that's it.

Ubuntu will drop support for 32-bit software starting with version 19.10 "Eoan". Canonical, the owners of Ubuntu, were said to be "in discussions with Valve about the best way to provide support from 19.10 onwards." It would appear that these discussions did not go well. At all. Valve announced that Ubuntu will no longer be "officially supported" on June 21st. Valve's decision is quite natural. 32-bit software simply won't run without 32-bit libraries. No "discussions" will change that reality. And a very large portion of Steam's games catalog consists of older games made with 32-bit systems in mind.

Valve has yet to choose which distribution they will "officially" support in the future ("currently TBD"). Valve's own "SteamOS" is a fork of Debian so Debian is likely a contender.

Steam users on current version of Ubuntu do not need to worry, Steam will keep on working just fine. It's just future versions that will not be "officially" supported. And there will absolutely be "unofficial" support for future versions of Ubuntu too. A PPA with 32-bit libraries or Snap packages are realistic options.

Ubuntu's move to drop 32-bit does effect some free software projects: Wine is typically used to run proprietary 32-bit software. It does support 64-bit Windows programs too but those are the minority of Wine's practical use-cases. Ubuntu's decision is therefore a huge concern for them too.

The Linux Kernel uses a pure 32-bit ABI to count time using a 32-bit integer on 32-bit systems and this will won't change so backward compatibility can be maintained. It counts time elapsed since 1 January 1970 and it will overflow in 2038. 64-bit kernels use signed 64-bit time_t integers which means that 64-bit systems won't have this problem the next 292 billion years. Time's running out for i386 and i686 machines, tick tock. This is also a problem when running 32-bit software on a multi-lib 64-bit system with a 64-bit kernel depending on how the 32-bit application stores time and many 32-bit games will simply crash after 2038. Steam will have to drop it's 32-bit legacy sooner or later. There's only 19 years left until this crucial deadline.