The Chinese memory manufacturer ChangXin Memory Technologies is making great progress ramping up its production of 8 GiB DDR4 and LPDDR4 DRAM chips. The memory cartel does not like competition from a new player. It is rumored that American Micron Technology is planning on launching a patent lawsuit against ChangXin in order to lock them out of the American market. 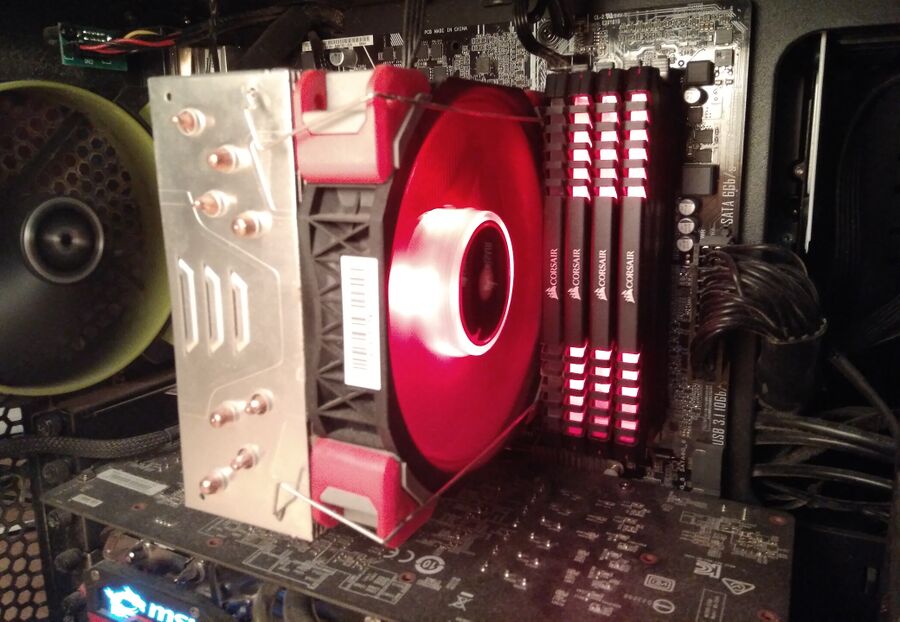 A AM4 motherboard with a cheap Artic Freezer 33 CPU cooler with a Red LED fan and some DDR4 RAM sticks with red LED's on them. It says Cors Air but it's actually Random Access Memory.

2020 begun with 97% of all memory chips on the market coming out of the factories of only three big manufacturers: Micron Technology (American), Samsung (South Korean) and SK Hynix (also South Korean). Those three have been caught price-fixing cartel-style more than once.

A fourth player, Chinese ChangXin Memory Technologies (长鑫存储), begun trial production of 8 GiB DDR4 DRAM chips in 2018 and 8 GiB LPDDR4 chips were sampled in Q3 2019. ChangXin is currently producing DDR4 RAM from 20,000 wafers per month. They plan on ramping that up to beteen 70 and 80 thousand wafers per month by the end of the year with future targets as high as 120,0000 wafers per month.

ChangXin's s very successful entry into the DRAM market is noteworthy for two reasons: Many other Chinese firms have tried and failed, and China doesn't hold much in terms of intellectual property rights related to DRAM manufacturing. As an example, Tsinghua Unigroup announced big plans to produce DRAM in Nanjing and Chengdu. That resulted in a rapid rise in property prices in those areas and that was all that came out of that venture.

The lack of Chinese-held DRAM-related IP is why many in China who are familiar with the computer component manufacturing industry currently fear lawsuit from American memory giant Micron Technology. The US-China trade war is escalating in other areas, and it is believed that the American government would look favorably upon a lawsuit against a Chinese memory manufacturer at this time. ChangXin's rapidly increasing production capacity will, if unchecked, result in lower DRAM prices across the board. That's bad news Micron Technology who relies on DDR4 prices staying artificially high.

ChangXin is using a DDR4 chip design that is somewhat similar to Micron's. This is why it's quite possible that ChangXin is infringing on one or more of Micron's patents. ChangXin entered into an agreement with WiLAN, a well-known patent troll who holds the patents obtained by the German memory company Qimonda AG, in December 2019. They have also licensed a wide range of patents from Rambus. This means that ChangXin does have some IP rights they can use to mount a defense against a potential lawsuit.

ChangXin is using a "trench" design similar to what Qimonda AG used.

ChangXin's design being similar to a design they have acquired the rights to may not be enough to fend off a potential lawsuit by Micron Technology.

How much of an impact a lawsuit would have is not all that clear. ChangXin is primarily targeting the Chinese market and it's partners are primarily Chinese. A trade/patent war with Micron could easily result in ChangXin being banned from the US market the same way Huawei has been banned in order to give inferior American companies a unfair competitive advantage. A patent lawsuit from Micron on Chinese soil would not be so easily won as one on American soil would be and there's a limit to what the Americans can do to prevent a Chinese company from selling Chinese goods on the Chinese market.

On the one hand, as an American, I don't want a situation where the first mover, the company that invests the money and human resousrces into inventing technologies, is then at a disadvantage because their technologies can then be used by foreign companies to undercut them; like a game where parrying is overpowered, where you never want to do anything yourself because it makes more sense to wait for SOMEBODY ELSE to invent something, and then just use that.

One of America's biggest exports is intellectual property, it makes sense America would go to great lengths to try to enforce parents globally; If your country mostly exports, IDK, cheese & fruit nuts, it's hard to steal that. If it makes ideas, it's much easier.

On the other hand, patents trolls are clearly a plague upon society and often limit technological progress. Perhaps the solution is to enforce intellectual property rights, but not give the owners of these IPs the final word in how they're sub-licensed.

Let Apple make their chips, but force them to sell them at at least a SOMEWHAT reasonable price if other people want to use them. Also if you were dumb enough to buy an Apple product, force Apple to sell replacement parts.

If you invent a break-though on RAM or CPU architextures, you can't just sit on that invention and sell CPUs that blow everybody out of the water, you also have to sub-license these discoveries at a price that still rewards you sufficiently for discovering them, but you can't lock it down and go try to take over the world with it.