Google appeared to back down from removing the webRequest API which is used by the most efficient advertising and annoyance fixing extensions who make the modern web usable from Chromium and Chrome. It only appear that way and a new update to their Manifest v3 doc shows that their plans to force you to view advertisements when you browse web are very much on track.

Being able to use a blocker is something more technology-savvy users appreciate and value both for privacy-reasons and for a annoyance-free experience. Websites work just fine without 10 background-scripts tracking every little cursor-move and the content isn't enhanced by a dozen of advertisements. Content filters make the web a better experience. 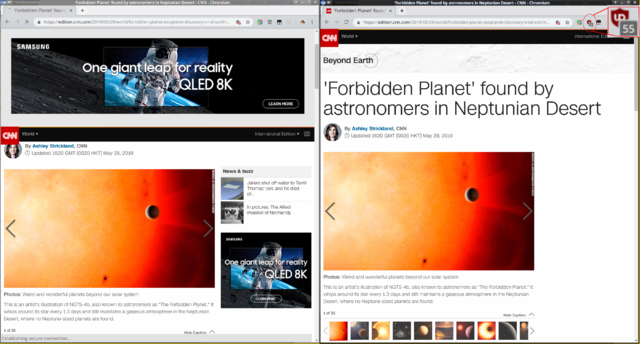 Are 55 different scripts running in the background doing who knows what really required?

There is another side to this: Running a web services isn't free and for-profit corporations aren't doing it just for fun. Making it harder to use the web without being tracked while at the same time ensuring that advertisements are seen, not blocked, is clearly desirable from a business-standpoint.

Alphabet Inc, Google's parent company, had this to say about advertisement blockers in a 10-K statement filed with the Securities and Exchange Commission:

"New and existing technologies could affect our ability to customize ads and/or could block ads online, which would harm our business.. Technologies have been developed to make customizable ads more difficult or to block the display of ads altogether and some providers of online services have integrated technologies that could potentially impair the core functionality of third-party digital advertising. Most of our Google revenues are derived from fees paid to us in connection with the display of ads online. As a result, such technologies and tools could adversely affect our operating results."

Alphabet Inc to the US SEC in December, 2018

Thus; it is not that shocking to see Google has decided to stick with their decision to remove the webRequest API for regular users despite a whole lot of push-back. Only enterprise users will get to keep this feature:

Simeon Vincent, Google Developer in Google Gropus on May 25th, 2019

It looked like Google was backing down on this issue just a few months ago and many websites reported that they had as if it was a fact written in stone. That's clearly not the case.

The simple fact that functioning content filters will remain available to enterprise users and only be taken away from regular people says something about Google's intentions and real reasons for removing Chrome's blocking capabilities. It's not about "performance" (Browsers perform better when filters are used since fewer useless scripts run in the background) and it's not about valid technical reasons. The simple truth behind all the lies, propaganda and excuses is that content blockers are reducing their bottom line.

Developer of the best annoyance-blocking extension for Firefox and Chrome/Chromium, Raymond Hill of uBlock Origin, had this to say about the current situation on May 27th:

"The blocking ability of the webRequest API is still deprecated, and Google Chrome's limited matching algorithm will be the only one possible, and with limits dictated by Google employees.

It's annoying that they keep saying "the webRequest API is not deprecated" as if developers have been worried about this -- and as if they want to drown the real issue in a fabricated one nobody made."

Raymond Hill on github's uBlock issue tracker on May 27th, 2019

Raymond Hill makes a great point: It really doesn't matter how Google spins it when the end-result is that the best and most efficient extensions for blocking and filtering annoyances no longer work.

It really looks like Google will be pushing full steam ahead on this one with no regard to objections from users and developers. And they can. Google Chrome is the most used desktop browser by a wide margin and it's unbranded version Chromium is the commonly used browser on Linux desktops. Mozilla Firefox is still alive but just barely: Mozilla completely missed the mobile market and their desktop market share has been dwindling for a decade. The fact that it's a slower browser, specially in anything graphics-intensive, combined with it's gradual move from being a privacy-focused browser to spyware has not help it retain it's user-base.

Google had no choice but to provide features for the more tech-savvy in it's early days. That is no longer the case on the desktop and it never was on the mobile. They are now in a position to restrict users of their software without losing too much market share and Chrome will remain the dominant browser even if some switch. We fully expect uBlock to become unavailable in future releases of Chrome and Chromium. Forking is always possible, and that may be a viable option for the more tech-savvy. The vast majority will be stuck with tracking and advertising.