The Librem 5 smartphone from San Francisco based Purism is almost entirely powered by free and open source software - except for the modem which relies on binary blob firmware. It has therefore been highly praised and recommended by organizations such as the Free Software Foundation. That the hardware specifications are those of a 3 years old $100 smartphone while it's price-tag is $699 is apparently only a minor concern to those who get promotional models for free. Purism just announced that they will make a special US-made version of this phone available at a hefty price of just $1999. 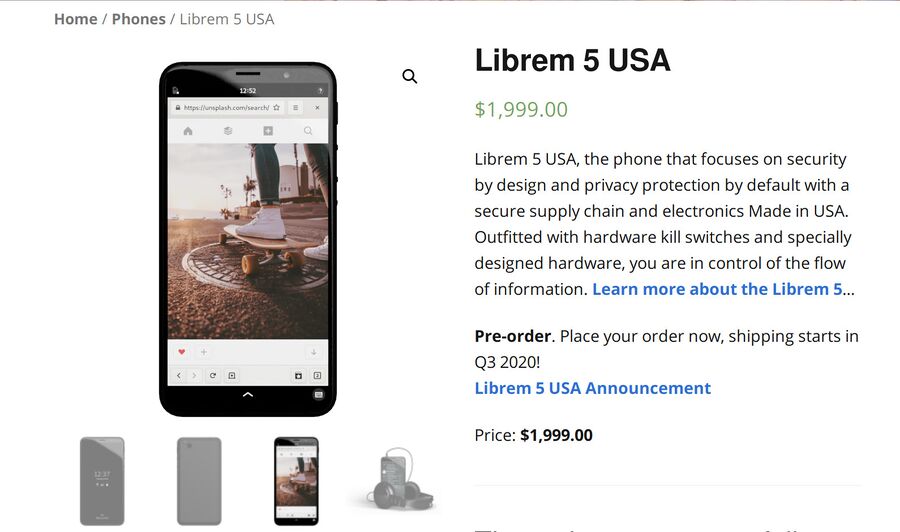 The American-made model of the Librem 5 will have the exact same hardware specifications as the "regular" model. The only difference between the regular $699 model and the $1999 variant, according to the Librem 5 USA product page, is that much of the insanely overpriced model's electronics will be produced in the USA. The Chassis for it will be imported from China, the modem will come from Germany and the Wifi Card will be imported from India. It's mainboard and the rest of the electrical components will be sourced from American producers.

The Doogee Y6 Pro and the BlackView BV6000 are examples of Chinese smartphones you could buy for less than one tenth of the price of a US-made Librem 5 phone - 3 years ago.

The Librem 5's standard model is already wildly overpriced at $699. It does come with mostly free software and Purism's own Debian-based PureOS operating system. That's great but it does not excuse that the phone's hardware is equivalent to a $100 phone from 3 years ago. A quad-core ARM Cortex A53 CPU at 1.5 GHz, a weak GPU, 3 GB RAM and 32 GB eMMC storage combined with a 13 MP back camera and a 8 MP front camera are not impressive specifications late 2019. It doesn't even have Wireless AC, only Wireless N.

The $1999 US-made Librem 5 announcement came a day after Purism announced raising $2.5 million in investments by means of "convertible notes". Purism is a "Social Purpose Company" which limits their fundraising options to special investment-fundraisers. Their investment-announcement mentions that they will be holding another "convertible notes" sale in the near-future - which could indicate that they have liquidity problems. That could explain why they are trying to sell pre-orders for US-made Librem 5 phones at $1999 apiece.

The Librem 5 is highly overpriced at $699 and it is insanely overpriced at $1999. Nobody should pre-order or buy this. It is great that they are trying to make ethically good choices and it is unique that they are trying to make devices that run on entirely free software. That does not excuse how wildly overpriced these devices are. You can't just drop a flash card with some free software on it into a broken toaster and ask people to pre-order it for the price of a car and expect us to applaud and praise that scam, so sorry. And that is not a too inaccurate way to describe the Librem 5.

What is the point? If it's that it's free software then that is, as mentioned in the article, great. However, the Raspberry Pi is also running free software. Those boards didn't start out at $700 or $2000 a pop because excuses, they were reasonably priced from the start. It is possible to be a startup and deliver something which actually works at a reasonable price.
Permalink
Latest News Headlines See the more archive for news stories
Retrieved from "https://linuxreviews.org/w/index.php?title=Purism_Announces_US-Manufactured_Librem_5_Model_For_$1999_USD&oldid=11662"
Categories: